May 06, 2020
Had it been a minute faster or a minute slower on its 2,285-mile journey, the Titanic might have been just another passenger ship that never met an iceberg.

That’s the cruelty of timing.

We’re seeing that cruelty now in the arts, as musicians gauge whether they should release a new work in the midst of the coronavirus pandemic, or wait until it’s okay to throw an album release party.

Museums are finding themselves in a similar quandary. “The Path to Paradise: Judith Schaechter’s Stained-Glass Art” opened on February 16 at the Memorial Art Gallery. It was to run until May 24, less than three weeks from now, and then move on to the Toledo Museum of Art for a June 27 opening. Further down the road, the Des Moines Arts Center awaits an early 2021 arrival of “The Path to Paradise.”

RIT Press published a colorful, 165-page catalog to accompany the exhibit on its travels.

Then COVID-19 disrupted matters. The Memorial Art Gallery — where Schaechter’s magnificent and provocative panels still await your eyes — is closed to the public. About four dozen pieces, chosen from the 232 she has created over the years, are still installed on the walls, with very few people having had the chance to appreciate them, says the MAG’s public relations guru, Meg Colombo.

And the situation’s much the same at the Toledo Museum of Art. It’s also closed to the public — no one knows for how long — and apparently will not be ready to mount “The Road to Paradise” as scheduled.

“I basically called them up and asked, ‘Is my show cancelled?’” Schaechter says, assuming a worried, cartoonish tone.

There has been no answer. While there’s public concern over a possible disruption in the nation’s food chain, the arts chain has already been broken. Schaechter and the Memorial Art Gallery have chosen to respond with a virtual tour of her exhibit at 6 p.m. Thursday, May 7, from her home in Philadelphia. It’ll be streamed live on Facebook.

Schaechter’s painted glass is not what is commonly found in church windows. The works are intricately detailed, crammed with visuals drawn from nature, and often alarming in message.

“I’m using a lot of strategies of beauty to sort of make the imagery more poignant,” she says. “We all have to live with grief and fear and negativity in our lives. And no one is exempt. I don’t know what else art is for except to help us with that.”

Schaechter is a funny, interesting, and provocative artist. “Everybody thinks I wear black robes and greet the mailman at the door with a candelabra,” she says.

This is perhaps to be expected of an artist who grew up with parents who she describes as “crazed, radical atheists.” One who confesses her moment in music is frozen somewhere around 1984 and Devo.

Schaechter went off to the Rhode Island School of Design in the early ’80s to study painting and found herself drawn to the classes in stained glass. But not because she saw her future there. She admits she was intimidated by painting and the expectations were less intense when working with glass.

Not so. Schaechter had stepped into the American Glass Movement. Giants walked those halls, including Dale Chihuly and Richard Harned, a professor who Schaechter calls the “mad scientist” who “let me explore the real me.”

By 1986, Schaechter had stopped painting. “I didn’t even notice it was gone,” she says.

Schaechter calls her first colored glass pieces crude and cartoony, and says that her influences were the East Village and punk rock. “I thought I was going to get instantly famous by hanging out with those people,” she says.

Her work then, she admits, was “low-brow art.” Glass-art highbrows would tell Schaechter, “Your technique is terrible…but it kind of works.” She says her response was argumentative and rebellious: “Yeah, I did it on purpose, so screw you.” 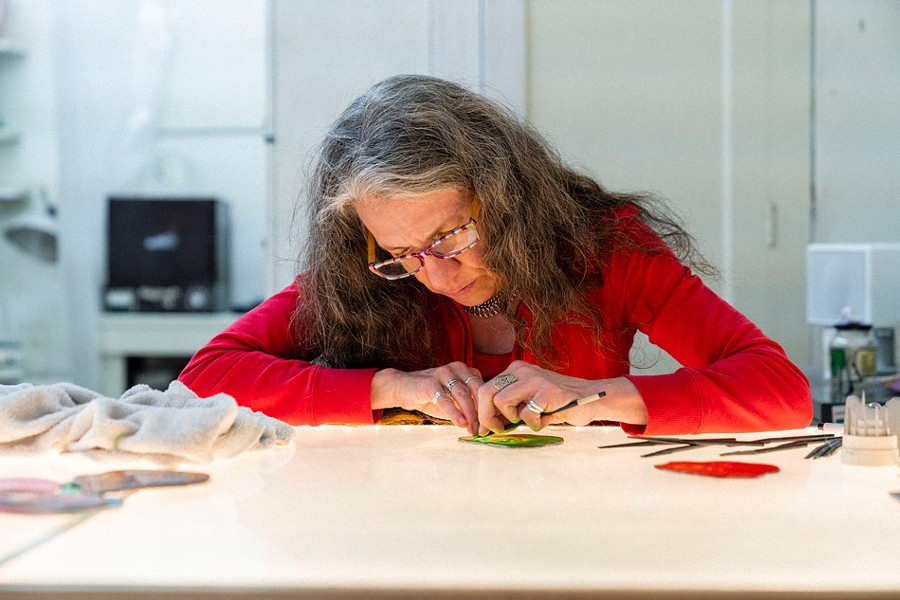 Over time, Schaechter refined her technique. In defense of the visions of violence in her work, she references centuries-old glass art that depicts gore, including “a lot of eyeballs torn out,” she says. “So, I didn’t invent this.”

Schaechter says she loves animals, but some of her panels show animals in pain. The message can shift with the news of the day: The artist says a panel depicting a sinking ship and possibly drowning dog began as a comment on global warming and habitat destruction. But with the election of Trump, it can now be seen as an admonition against his harsh immigration policies.

As a child during World War II, Schaechter’s now-92-year-old father immigrated from Italy with Jewish family members. They were hard-pressed to find a country that would take them, and finally ended up in Ecuador. Schaechter says the U.S. turning away immigrants from South America today brings to mind the way her family was denied entry.

At age 59, “I feel like my neural pathways have calcified,” she says.“It’s harder to experiment as you get older, it’s harder to improvise.”

And, “There’s pressure on creative people to use this pandemic time to be super productive,” Schaechter says. “At first, I felt incredibly unmotivated. I don’t know anybody who can be creative when they’re panicking. The pandemic might change what people go to art for. It’s turning into political commentary. And it’s terrible that it had to happen because of the pandemic.”

These aren’t bowling lanes in Georgia. New York State’s serious approach to the coronavirus pandemic has left the lights off at The George Eastman Museum as well. But through its virtual endeavor, “Eastman Museum at Home,” the public can view much of the museum’s collection, as well as videos on its current exhibitions. In one such video, Mexican photographer Alejandro Cartagena explains how he rescued family photos from dumpsters and marketplaces and converted them into art. Or you can watch instructions on how to make a phenakistoscope, poke around the virtual gardens (where it’s always summer), and check out movie-streaming recommendations from the Dryden Theatre. In particular, “Behind the Scenes at Eastman Museum, Featuring Badly Photoshopped Cats” is worth a few moments. And the 360 Historic Mansion Tour is like a video game where you’re driving a motorcycle through George Eastman’s most-cherished possessions.

The Strong Museum of Play

Just down the street, The Strong has become the “Virtual Strong National Museum of Play,” which includes Chief Curator Chris Bensch’s series, “Stories Behind the Stuff,” a collection of two-minute videos explaining the history of the Hula-Hoop, the Frisbee, the board game Candy Land, Mr. Potato Head, and the stick (which was inducted to the National Toy Hall of Fame in 2007, drawing gentle mocking from Stephen Colbert). But as Bensch pointed out in the video series, “Even dogs know that this is a toy, it’s not just a stick.”

Did you know that Play-Doh was originally wallpaper cleaner? As that use of the product died off, it was converted into the perfect modeling clay for children. An almond aroma was added, which may have encouraged kids to eat the stuff, Bensch noted. Someone thought the scent was remembered fondly enough that, for its 50th anniversary, a Play-Doh perfume was introduced. Briefly.

“Sometimes there are toys that are real losers,” Bensch said as he re-introduced The Daddy Saddle, a plastic saddle that kids could strap onto dad’s back and ride him, on his hands and knees, across the living-room floor. Mercifully, Bensch noted, The Daddy Saddle did not come with spurs.