January 22, 2020
It is helpful to think of the release of a new Joywave album as a biological function. “I just naturally produce one every several years,” lead singer and songwriter Daniel Armbruster says. “I turn it in to the record company and then they decide if they want to release it. And they liked this one, so it’s going to be released.”

It’s kind of like a snake shedding its skin? 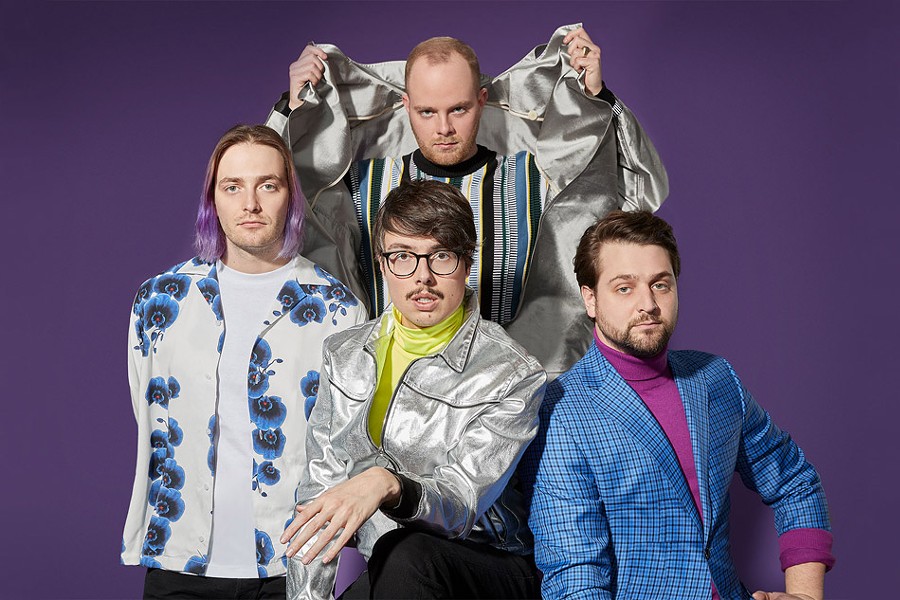 Joywave sheds the new album, “Possession,” on March 13. It’s the band’s third full-length release, following 2015’s “How Do You Feel Now?” and 2017’s “Content.” But by now, if you’re paying attention, you should have heard five of the 12 tracks.

“Everybody binges everything, right?” Armbruster says. “A new Netflix show comes out, you watch the whole series in one weekend.”

So the idea now is to slow things down. Hand out the artistry by piecemeal. Allow the ravenous public to savor the musicians’ hard work.

“The release of the album is the end of the album campaign, whereas it used to be the album release was step one, right?” Armbruster says. “And then you worked singles from it along the way, over a year or two years afterwards.”

Yet these calculated album-release plans end up getting swamped by a tidal wave of singles, EPs, videos, and remixes, plus a social media presence that addresses all things Joywave. After the band announced its 2020 tour, a fan asked on Facebook why there is not a Pittsburgh date. “It’s in Cleveland,” Joywave replied.

If you think that’s funny, Joywave is always in on the joke. It’s 2016 album “SWISH” was actually a fake, consisting of nine remixes of the band’s 2015 single “Destruction.” Plus one new song, perhaps because Joywave felt guilty about playing a trick on its fans, and wanted to give them something new. Joywave may be a band of goofballs, but they’re also nice guys.

And before launching the new tour, which includes dates in Europe (the Munich show is in Berlin), Joywave has a Friday, January 24, concert at the ROC Dome Arena in Henrietta, with the New York City indie band AJR, Sub Urban, and Dreamers.


The band has given up its studio behind the Bug Jar, but the guys — including keyboardist Benjamin Bailey, guitarist Joseph Morinelli, and drummer Paul Brenner — insist on living in Rochester, despite the weather. Armbruster even recently bought a house.

Joywave is a rock band that embraces bounding, life-affirming electronic beats — with a self-awareness that sometimes approaches self-parody.

“Growing up, we always hated the music videos where the band rocks really hard and the room starts shaking,” Armbruster says. “The idea of music videos is ridiculous to begin with, right? You’re kind of miming the song. So why not make something fun?”

This idea, he says, is to “Make the whole thing into a giant mockery.”

The band’s onstage look — “As close to a cult as you can get,” Armbruster says – could be called mockery, otherworldly, or some kind of individual statement from satirical, forward-thinking sci-fi gentlemen.

Everything Joywave touches is multi-layered. “Possession” samples the voice of astrophysicist Carl Sagan. Even the packaging of the vinyl – a gold disc – is borrowed from the gold records that Sagan compiled to accompany the Voyager probes into outer space in the late-1970s. Just in case the probes, many light years from now, were discovered by aliens — aliens, who might in turn wonder, “Who were these aliens?”

Joywave’s “Possession” would provide some answers. The five songs we’ve heard so far began with “Blastoff,” which Armbruster says addresses, “the stopping and starting of our lives...It really feels like a bubble when you’re on the road. You come back and our friends have had kids or changed jobs or things have changed in their lives. And you go, ‘Oh, every single day of mine was exactly the same.’”


It was followed by “Like a Kennedy,” with its startling video, re-creating the John F. Kennedy assassination over and over and over. Each version of the crime, deliberately bloodless, is covered up by people wearing what looks like Hazmat suits. It’s a comment on the endless cycle of violence in this country, and poses a disturbing thought at the end: What if it had been Jackie Kennedy who was shot that day?

“Obsession” is, Armbruster says, “The need to focus on things to distract myself from others.” He cites his own obsessive-compulsive disorder tendencies. “I can’t get off of a negative thought, ever. I obsess over it. I run through a lot of scenarios that are fictionalized, 10 levels down. I will have that conversation and disagreement with that person in my head, and it hasn’t even happened. It may not exist at all.”

In his pre-Joywave days, Armbruster was playing in bands such as The Hoodies. Good bands, but not paying the bills.

“I would get out of work, sit on the couch and watch ‘The Colbert Report,’” he says. “And, ah, it was kind of the only thing that made me laugh in those days, when I was like, ‘What did I do wrong with my life? I really wanted this music thing to work out, and I’m just working part-time at Staples, and still living with my parents in my mid-20s.’”

At about that time, cyclist Lance Armstrong came out with his “Live Strong” wrist bracelets, in celebration of the fight against cancer. Stephen Colbert, who was then hosting “The Colbert Report” on Comedy Central, had just broken his wrist. He jumped on the “Live Strong” bicycle with his own “Wrist Strong” bracelets, as a way of raising awareness for wrist injuries. Gently mocking celebrity causes.

And as a Colbert fan, Armbruster had acquired a Wrist Strong bracelet. And he kept it for years, until the right opportunity to wear it presented itself. That was in 2018, when Joywave played “The Late Show with Stephen Colbert.”

“He came over and he shakes my hand, and he sees it and he goes, ‘No fucking way,’ because it was from 15 years ago,” Armbruster says. “So I was like, ‘You’re more famous than me.’ And he goes, ‘You’re right.’ So he takes it, he puts it on, and then when he holds our record on screen introducing us, he’s got the Wrist Strong bracelet, and he does a little dangle of it.”