Joywave closes out Rochester Fringe Festival in a big-decibel way 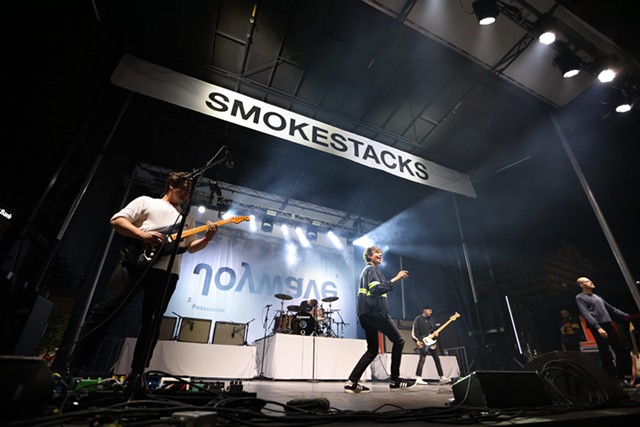 Very few people who give a damn about music have the same kind of records, album after album, on their shelves. That was the appeal of “Smokestacks,” the largely Rochester-centric closing show of the 12-day KeyBank Rochester Fringe Festival. A preamble of ukulele and harp, followed by sternum-rattling, downtown-window-shaking energy.

Saturday’s free show brought the exhilaration of big-decibel music in an open space in the cool of the evening, the sound echoing off the nearby buildings.

The space was the grass lot off of E. Main Street, recently dubbed “The Five.” But Joywave lead singer Daniel Armbruster wasn’t having it. He announced he was changing the name back to “Parcel Five.” And reminded the crowd that developers had other ideas in mind for it.

“Let’s all be thankful we are not standing in a casino right now,” Armbruster said.

Oh, there was some drama. Weather drama. “Smokestacks” — named for the Eastman-Kodak plant smokestacks off of W. Ridge Road, near where the Joywave guys grew up — opened beneath a beautiful afternoon sky. But by 7:15 p.m., after Cammy Enaharo, Mikaela Davis and KOPPS had played, the forecast of rain came to pass, midway through the set of the soulful rock of Spencer.

The Los Angeles band Cannons and the curators of the show, Joywave, were yet to play.

But as Cannons and its silver-sequined lead singer Michelle Joy pounded its way through its set, the fitful drizzle of rain soon passed. And the crowd was not discouraged as the chill of the evening descended. What had been a few hundred people for Enaharo’s opening set had grown to several thousand people by the time Joywave hit the stage shortly after 9 p.m. 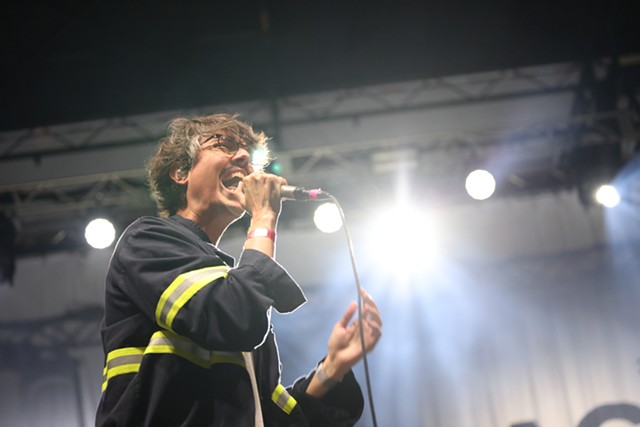 “We are Rusted Root, thank you for coming out,” the always glib Armbruster told the crowd. Rusted Root (an overtly frequent act at the Rochester Lilac Festival) is a roots rock-worldbeat band from Pittsburgh, and Joywave is not.

The scintillating band of local heroes known as Joywave burst out of the Rochester scene a decade ago, building a modestly national rep on the high-energy club and festival scene. They’ve played big-name festivals, and made a few appearances on the late-night chat shows. But the band always returns home to Rochester.

Just as Saturday night was a bit chilly, the pandemic had put a chill on Joywave as well over the last 18 months, wiping out any touring that the band had planned in support of “Possession,” the album it released in early 2020.

“We spent the last year hiding in our basements and ordering off of Instacart,” Armbruster confessed to the crowd, although that does not appear to be completely true. The band has just released a four-song EP, with those songs to be part of a full album, due to be released in February.

Armbruster has said that the upcoming album is more cohesive, having been written over a much shorter time frame than its previous releases. Songs of unrestrained beats backing wistful emoting and introspective lyrics.

So for comparison’s sake, Joywave opened its Smokestacks show with “Obsession,” and its admission “I just needed something to get me through the night.” But by the third song of the night the band was onto the new material, with“Every Window is a Mirror.” Its lush, layered arrangement fits nicely into the Joywave catalog.

KOPPS emerged from the same Bug Jar-driven scene as Joywave. In fact, neither can shake that local indie vibe. “How many of you know we’re playing a show at the Bug Jar next weekend?” lead singer Patricia Patrón announced between songs.

Equally derailed by the pandemic as Joywave, KOPPS was playing its first live show in two years. And like Joywave, it has kept its hand in the game by writing new music. Songs like “Popular” and “Bad Thing” retain the band’s heavy beat, with the oddly compelling synchronized movements of bassist Kyle O'Hara and guitarist Travis Johansen. But it’s Patrón’s big personality, dance-floor energy, and powerful voice that really drives KOPPS.

The out-of-towners were Brooklyn’s Spencer. — the period is a part of the soulful rocker’s name — and Cannons. But Spencer. is actually originally from Rochester. And his drummer for this show was a Rochesterian: 20-year-old Roy Marshall is the son of the local rock-guitar slinger Phil Marshall.

Earlier in the afternoon, Mikaeka Davis and Cammy Enaharo represented even more of the rich depth of the local music scene. Davis brings a harp to the party. Not a blues harp, mind you, the thing you slip into your pocket. No, this is a full-sized, angel-edition harp.

She played acoustic versions of her more pop-polished album on Rounder Records, a respected national label that historically appreciates a little granola with its guitars. Davis’s sound is melancholic and beautiful, especially as she and her two-man band — with ukulele, mandolin, and acoustic guitar — eased into Appalachian-Mountain territory. Then a sweeping glissando of strings made me think, Am I really sitting in the middle of a weary Northeastern American city?

Playing solo, Enaharo accompanied herself with backing rhythm tracks. Close your eyes and the vocals feel like Dusty Springfield, and then the ballad side of Amy Winehouse. High praise, but these days we need more of this: Cool and dreamy romanticism.

COVID or not, the shows went on

So, after 18 months of live entertainment caught in a COVID headlock, how’d the 10th annual Rochester Fringe Festival come out?

Despite the lurking presence of the pandemic, only one act, “The Little Merman From the Black Lagoon,” was forced to cancel due to a cast member’s positive test. Producer Erica Fee, a 24-hour COVID news network, says the New York Independent Venue Association sounded the alarm in early August that attendance was down across the county

Why? Because, after a brief decline in the red line on the COVID-19 chart, the delta variant took charge.

It took mandatory vaccines and masks for indoor venues to pull off the Rochester Fringe, Fee said. In Western New York, she said, “In terms of performing arts, we were the first ones to do it.”

Large public events are fraught with pandemic challenges. Opening the sides of the Italian circus tent at the intersection of Gibbs and East Main streets, and large air-circulating fans were apparently a key. “What we can control is ventilation and circulation,” Fee said.

Measurements of CO2 levels (the result of an audience’s collective breathing) in the tent were equivalent to levels outdoors, Fee said.

And despite the obvious challenges of putting on a show with COVID still very much a presence, the calculation is the longer such an event is out of the public eye, the more extensive the rebuilding process will be. Last year’s Rochester Fringe was entirely virtual.

“If we would have waited three years for a festival,” Fee said, “I’m not sure how that would have worked.”

Charming Disaster emailed to say that I had misheard a lyric from their excellent show Thursday night at The Spirit Room. In the midst of the Brooklyn duo’s songs about dead people and the occult, I thought they were singing “kill a cat.” But as cat lovers, they say the line is actually “pill a cat” — a reference to trying to get your uncooperative pet to take its medicine.

Jeff Spevak is WXXI’s Arts & Life editor and reporter. He can be reached at jspevak@wxxi.org. Feedback on this article can be directed to dkushner@rochester-citynews.com.