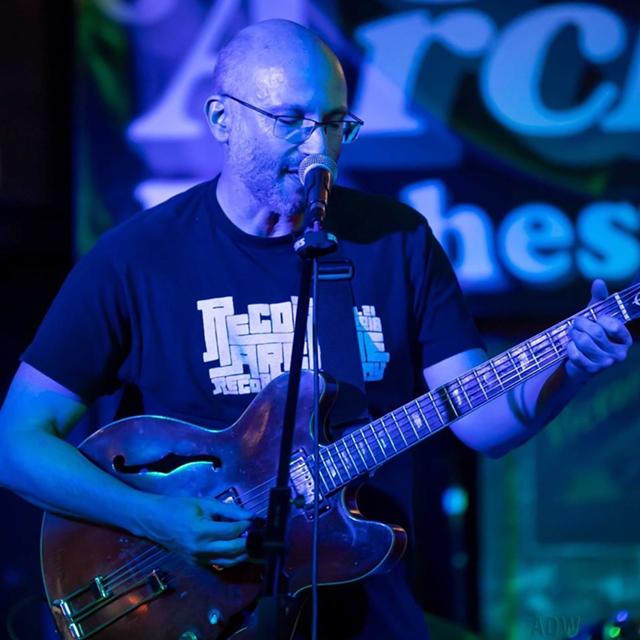 The past year was good for something: songwriting.

Even for a guy like Jon Gary, who admits he’s not a terrifically prolific songwriter. He’s just released a five-song collection on the digital platform Bandcamp. The EP’s called “MMXXI,” or for those who aren’t up on Roman numerals, “2021.” Music that reflects an excruciating year.

“I think it’s broadly applicable to everybody, really,” Gary says. “Everybody’s a little bit, you know, is pretty heavily affected by Jan. 6, and the pandemic, and not being able to get together with their friends, just general social activities and music.

It’s the year that’s been a downer. The music is not. The sound is frequently upbeat, a kind of Britpop thing with occasional forays into psychedelic-era Beatles. Yet as you’ll hear in “Say Hello,” it’s a sound contradicted by often-cynical lyrics:

No better place to feel alone/ than a room full of people staring at their phones.

Clearly, “MMXXI” is a product of our confusing times.

So, who is Jon Gary? A lot of things.

He lives in downtown Rochester’s East End, and for years was trapped in typical artist schizophrenia: a musician, and a software-infrastructure developer for Twitter. “Well, you gotta eat,” the musician says.

Now 58, he’s been retired for a couple of years now, but in a very un-retiring way.

Until winter descended on us, Gary biked a mile or two every day. Perhaps along the Genesee River, where he might come across a dredging operation (which can be interesting in a contemplative way, if you’ve ever taken the time to watch). Or, perhaps a bit more adrenaline-charging, he’ll try the Erie Canal pathway, and pedal past a firefighter school, where future firefighters are training how to put out future fires by hosing down fake buses and airplanes.

Gary also does some volunteer work. And he reads, drinks coffee. “I don’t work for The Man anymore,” he says.

Now he works for himself. Livin’ the dream.

But there’s always been the art. “I was always a doodler,” Gary says. “But in 2013, that year I said I’m gonna draw something every day.”

He self-published a collection of this stuff in 2019, a slim book called “This Is Not What I Consider Art.” There are dark cartoons among these pages. A pair of surgeons in surgical garb hover over a bleeding patient. “Who would’ve thought this would be so complicated?” one surgeon says. The other agrees: “So much blood!”

And there are drawings that are simply odd juxtapositions. An astronaut finds a coffee pot on the moon.

“I’ve drawn thousands of these things now,” Gary says. “I think a fairly high percentage of them probably have a dark twist. I think some of them are funny, even when they’re dark.”

“Just living in the world.”

With pen in hand, he can be “mad or sad about the bad things. And sometimes you are amused by things that are bad, but not that impactful.”

So a cartoon of a prehistoric fish using a hamburger as bait to lure a swimming man onto his hook is a story destined for a bad ending. But this image is not particularly impactful, because at the same time that we’re laughing, we know it’s not reality. Great humor is sometimes the truth, but Gary is often going in the other direction. His drawings don’t play off of reality. They emerge from The Far Side of his brain.

And then there’s his music. And the travails of “MMXXI.”

Gary may claim he’s not prolific, but at least he’s steady. He’s been writing and recording songs for two decades. He’s best known around town as the bassist for the longtime alt-rock band Woody Dodge; it’s booked for a show Jan. 28 at Lovin’ Cup Bistro & Brews, with Jerry Falzone & Liar’s Moon.

This one-man band’s “MMXXI” is five songs for our current times. As in “Hey Bluebird,” where Gary sings, “Am I numb, because it never stops?”

A song, Gary hopes, that will lift listeners “out of the insanity.”

The collection is an intersection of Gary’s art and his technical past. John Kelley plays guest guitar on a couple of tracks. Two of the songs were recorded solely on his iPad, and an app called Garage Band. “Good enough for rock and roll,” he says.

But if you’re reading this, you have high standards. “MMXXI” meets them.

The songs are about communication, and miscommunication. They are about truth and lies. Gary sees 2021 as “the fragmentation of reality.”

“The way people are talking about January 6 on the right, I don’t know what they believe, but what they’re saying is like they live on another planet, and they saw something else,” he says. “They saw the FBI trick Antifa into storming the capital dressed as Trump supporters. Hairbrained insanity like that. That’s not what I saw.”

It was a coincidence he was happy to embrace, Gary says, when he realized he was writing a press release to accompany “MMXXI” on Jan. 6, of all days.

Jan. 6, the signature moment of 2021, which brings us to the final song of the collection. Á song called “What Do They Know About Love?” Gary calls this “a stream of consciousness.” A torrent of televised images from the storming of the United States capitol building.

Thousands gathering, waiting for their instructions.

In the circus of the mind, the barker preaches while you wait in line.

“It was a nightmarish thing to see, and I just kind of spewed this vision out,” Gary says. Bearded women. Fire jugglers. Trapeze beauties.

He’s always found the circus, and those old traveling carney shows, “to sort of be simultaneously intriguing and frightening,” he says. “So all of that was swirling around in my head at the same time that these guys were attacking the capitol.”

Monkeys in tuxedos. And that carnival barker, “he’s a bit of a clown.”

“It wasn’t the year we’d hope it be, right?” Gary says. “We had a new president, and we thought the pandemic was going to get better, and we had a vaccine, everybody was going to get vaccinated, and things would sort of, maybe, come back to what we thought of as normal.

“And that didn’t happen.”