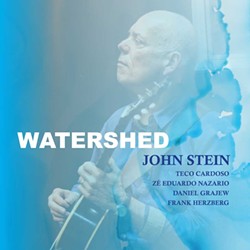 After graduating from Berklee College of Music in Boston, guitarist John Stein was immediately hired by the school. While teaching there, over the next three decades, he wrote three books on guitar technique and composition, recorded 14 albums, and worked with a variety of musicians including David “Fathead” Newman, Lou Donaldson, and Dr. Lonnie Smith. Recently, Stein left his teaching job to concentrate on his own music.

If “Watershed,” his first CD since making that move, is any indication, Stein should have an impressive next chapter. Listening to the album, it’s evident that he is a lover of Brazilian music. Stein originals, such as “Rio Escuro” and “Brazilian Hug,” are influenced by time spent in Brazil and his admiration for composers like Antônio Carlos Jobim.

The album contains five more Stein compositions, all of which are so polished, they come across as instant standards. The rest of the tracks are divided between actual standards (notably, a beautiful arrangement of “A Taste Of Honey”) and songs written by jazz guitar greats such as Jim Hall (“Waltz New”) and Pat Martino (“Cisco”).

Stein is an impressive guitarist, enlivening every tune with his gorgeous solos. Pianist Daniel Grajew, whose contributions are strong throughout the album, plays a particularly lively electric keyboard solo on “Cisco.” Teco Cardoso provides the perfect lilting flute accompaniment on “Rio Escuro,” bassist Frank Herzberg gets a chance to show his stuff on Stein’s “Mystified,” and drummer Zé Eduardo Nazario cuts loose with a strong solo on Joe Henderson’s “The Kicker.”