Joe Locke at The Little, and celebrating Joe Dady

From Jeff Spevak's 'Across the Universe' column

Music is a time machine. Thirty-six years. "It's hard for me to get my head around that," Joe Locke says.

It's been almost four decades since the birth of "In Front of the Silver Screen," if you're lucky enough to find a vinyl copy of it, the only form in which it officially exists. It's the hard-to-find debut album by what was to become one of the world's preeminent jazz vibraphonists. The liner notes insist the album was recorded on June 1 and 2, 1983, although Locke thinks it might have been two sets in one night. But he concedes his memory of the event might be a little off. He was only 22 at the time, and maybe a little caught up in the moment.

More than 30 albums and dozens of collaborations later, Locke returns to, as he calls it, "the scene of the crime." The Little Theatre, 240 East Avenue. Friday's 8 p.m. show is a part of the Art Deco theater's 90th anniversary celebration. "In Front of the Silver Screen" was recorded there, in the newly renovated, original theater, which has since expanded to five silver screens.

A crime scene? Not at all.

"I hope that any listeners who are at the concert that night," Locke says, "who know the first album, hopefully will hear the journey from that one night in 1983 to November 22."

And yes, when this gig was confirmed, he pulled out his copy and took it for a spin. "It really brought back beautiful memories," he says. "Happily, it stands up. It stands the test of time."

Locke was born in California and raised in Rochester, studying music by day and hitting the local jazz clubs at night. Then we lost him to the rest of the jazz world. He's played with Chick Corea, The Beastie Boys, and all stops in between.

"In Front of the Silver Screen" was literally recorded in front of The Little's silver screen. Former Little Theatre owner Bill Coppard was "our angel in the project," Locke says. The Joe Locke - Phil Markowitz Quartet also included Markowitz, a pianist who had been one of Locke's teachers at the Hochstein School of Music. Bassist Eddie Gomez had already established himself playing with the likes of Bill Evans. Drummer Keith Copeland, who passed away in 2015, had played with Stevie Wonder and taught at the Eastman School of Music.

"In Front of the Silver Screen" is six songs. Locke and Markowitz each wrote two of them. The album also includes two covers from opposite sides of the music spectrum: a nearly 11-minute version of the 1949 standard "My Foolish Heart" and Stevie Wonder's "You and I."

He will play none of those at Friday's show. "Only because that music was documented, and I really want to share with the audience where I am today," Locke says. "And to make the contrast, by comparison, of what a journey it's been."

That journey has taken him back to where he was in 1983. Friday's show features the same configuration, with keyboardist Jim Ridl, bassist Lorin Cohen, and drummer Samvel Sarkisyan. It's the band that plays on Locke's most recent release, "Subtle Disguise."

Locke played a handful of tracks from "Subtle Disguise" at the 2018 Rochester International Jazz Festival. The album contains mostly instrumentals, but features two surprising tracks with lyrics: Blind Willie Johnson's "Motherless Child" and Bob Dylan's guilt-rage over the death of a boxer in the ring, "Who Killed Davey Moore." Raul Midon sings both of them.

"The idea of a collaboration actually had its genesis at the Rochester jazz festival," Locke says. This was a few years earlier, in 2015, when he was performing his "Love Is a Pendulum" album in its entirety. It was inspired by a poem by Barbara Sfraga, and during the performances Locke would read a verse of the poem between each song. Midon was playing down the street at the Lyric Theatre, and came to one of Locke's shows. The two had dinner together at Max of Eastman Place, and Midon suggested they work together. Out of that came not only the "Subtle Disguise" collaborations, but Locke recently added some good vibes to Midon's upcoming album.

"I'm really inspired by words, whether its lyrics or it's a poem or a novel, or hearing a turn of phrase that tweaks my creativity," Locke says. Growing up as the son of two teachers in a book-filled house on Park Avenue pushed him there as well. "You can't escape your own ghost," he says.

So there's some degree of literacy, and a lot of pyrotechnics. Locke puts everything into the vibes. Leaping, bounding behind the instrument, arms waving, his face a mix of ecstasy and focus. It's as though the vibe's notes are shooting through his body. Two mallets in each hand, he flails away with mad abandon, hitting cascades of sweet spots.

"It's not intentional. Some people have commented, 'Oh, you're really a great showman.' That's not my objective. The vibes is a very physical instrument, and I think I play it in a particularly physical way. And it's a lot of ground to cover, to get from one end of the instrument to the other. And when you're playing with a real high-energy band, it becomes sort of a gymnastic thing. And also, when I'm playing, it's a joyful experience to make music with great musicians, and I think that joy just kind of exudes, because I'm just so happy to be making music with my fellow musicians."

Tickets are available at thelittle.org. General admission is $40. The $90 VIP ticket includes a pre-show gathering with Joe Locke, and a vinyl copy of "In Front of the Silver Screen."

So many story lines were floating around last Saturday night at the sold-out Hochstein Performance Hall. It was "A Show for Joe," a tribute to Joe Dady, who passed away from leukemia last spring.

There were a few tears, for sure, but mostly it was an uplifting, celebratory evening, with more than 50 musicians performing songs written by Joe, or playing the music he loved. The other half of The Dady Brothers, John, was right in the midst of it all. 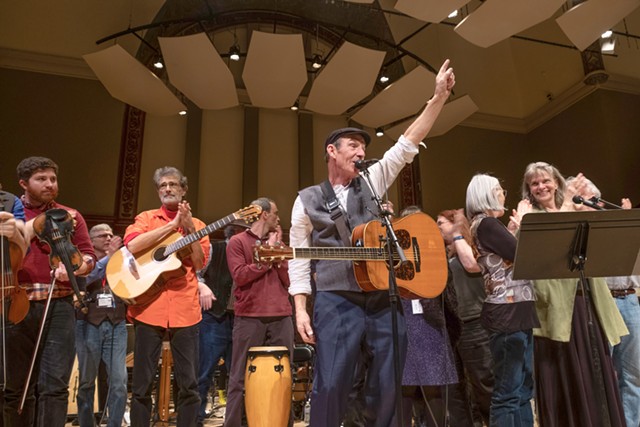 One of the stories that emerged that night: John and Carol Dady's daughter, Erin, produced the show. But she wasn't there that night. Her husband, Paul DeSarra, who worked for CooperVision and had been in Las Vegas on a business trip, suffered a brain aneurysm and passed away Thursday, two days before the celebration for her uncle. DeSarra was 45. The family lived in Webster, with two young children.


Did John consider postponing "A Show for Joe?"

"I did, momentarily," he says. "My wife and Erin said, 'You've got to do this.' It was like a runaway train, so many people had come from out of town for it."

And the show went on, with a surprise conclusion. After a mass of 50 musicians played Joe's "Man with the Banjo," a tribute to Pete Seeger (and on this night, a tribute to the banjo-toting Joe as well), Dan Monahan was called to the stage.

A soundman from Rochester who'd just come off a tour with Cyndi Lauper, Monahan was a guy who would turn up at the Dadys' open-mic nights at the old Muldoon's, off Lake Avenue, more than two decades ago. It was Joe who coaxed Monahan onstage there after a few tries. On Saturday night, Monahan closed the show, on guitar and harmonica and backed by all of those musicians, with a rousing rendition of Dylan's "Like a Rolling Stone." An appropriate tribute to the Dadys' legacy of spreading the music.

There are moments when Dustbowl Revival is what you'd expect of the Dustbowl: fiddle, mandolin, acoustic guitar and upright bass on the right side of the stage. But then there are trombone, trumpet, and drums on the left. Kind of like Blood, Sweat & Back Porch. And the group sure picked some unexpected cover songs when it played the 2018 jazz fest here: Supertramp's "The Long Way Home" and The Knack's "My Sharona." Dustbowl Revival plays 8 p.m. Saturday at Nazareth College's Callahan Theater, 4245 East Ave. Tickets, ranging from $20 to $40, are available at naz.edu/arts-center.