On a delightfully warm and sunny spring afternoon that invited al fresco dining, a respite from recent rains, my girlfriend Molly and I arrived for a lunch date at the Rochester diner mainstay, Jines. The spot offers a wide-ranging and inventive menu of tasty homemade food at reasonable prices (that includes many Greek specialties and, of course, breakfast all day), as well as outdoor seating on the prime people-watching corner of Park Avenue and Berkeley Street. Accordingly, the scene bustled around us entertainingly, while the Jines staff pampered us with kind and efficient service, a prelude to a fulfilling lunch.

We started by sharing saganaki ($7.99) -- a sliced wedge of kefalotyri cheese, lightly sautéed in lemon and sherry, with grilled pita. The tangy sauce proved an excellent counterpoint to the piquant, salty cheese. Molly enjoyed a falafel sandwich (with rice, $10.29) in a fluffy pita filled with lettuce, tomato, onion, and house-made tzatziki. The homemade falafel were delicately spiced, tender inside, crispy outside. 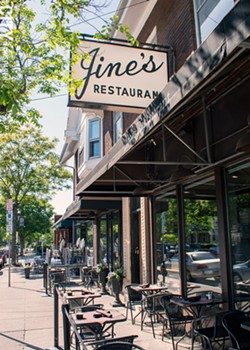 I slurped down a bowl of clam chowder Florentine ($3.99/cup, $4.49/bowl). Smooth and creamy with spinach leaves and chunks of potato, it was thinner than most New England clam chowders, and welcome on that warm day. I followed with a chicken souvlaki sandwich ($10.29), which had large, well-charred pieces of marinated chicken breast, lettuce, tomato, onion, and Jines's herbaceous tzatziki, wrapped in a pita and accompanied by crispy-tender steak fries.

Despite what the iconic sign overhanging the sidewalk on Park Avenue reads, this upscale Greek diner is "Jines" not "Jine's." George Gines -- father of current owner Peter Gines -- opened the restaurant at the corner of Park and Berkeley in 1971 with the name "Jines" -- not "Gines" -- so people wouldn't mispronounce it with a hard "g" sound. As for the sign, Peter won't replace it; he says he fears the city of Rochester would not allow a new sign in this preservation district.

After immigrating from Greece in 1951, George Gines worked for his uncles in a Rochester ice cream factory, then purchased Critic's ice cream parlor (then located in the Bull's Head area), which he owned from 1961 to 1972. George expanded Critic's offerings, adding a grill for hot dogs and hamburgers. Sensing opportunity in 1971-- at a time when no other restaurants existed in the eastern half of Park Avenue -- George leased the building at Park and Berkeley, where Jines has thrived ever since.

Peter Gines and his sister Irene worked in the restaurant as teens, and Peter assumed ownership in 1991 after he'd graduated with an economics degree from Hobart and William Smith Colleges and grew impatient with his desk job at Citibank. Peter attributes the restaurant's continued prosperity to his father, who he says instilled in him a sense of purpose and dedication, and established the foundation for success at Jines.

To survive for so long in an inherently volatile industry, on a stretch of Park Avenue that has seen a great deal of restaurant turnover through the years, is no small feat. With several staff members now in double-digit years of service, Peter says his efforts to treat employees first as human beings, and also looking to them for ideas for innovation and improvement, engenders loyalty and perpetuates further success. He also asserts that "communication between guests and staff is critical" to sustain repeat visitation, as does Jines's practice of allowing guests to customize menu items. Jines remains family-oriented; Peter's two teenage sons help out in the restaurant, and his wife Amy makes the spanakopita, meatloaf, and meatballs. And Peter's 78-year-old mother still makes Jines's delicious baklava.

Jines's space and menu (chicken and waffles, anyone?) have both evolved over the years. In the early 1980s, Jines obtained a beer and wine license, which Peter says helps their dinner and weekend-brunch business. Today, the beer list includes a worthy selection of local craft brews from such breweries as Rohrbach, Swiftwater, Three Heads, and Young Lion. Peter oversaw a significant renovation and expansion of the diner in 2008, updating the space with more seating and earth-toned decor. True to its roots, Jines has stools at a counter, but most of the seating is tables and booths. Framed black-and-white photographs of Rochester landmarks by local photographer Sheridan Vincent hang on the walls.

Jines offers several homemade soups on any given day, and on a subsequent visit I chose a bowl of classic Greek avgolemono soup ($3.99/cup; $4.49/bowl), which combines chicken, orzo, egg, and lemon. Jines's version has a delightfully creamy balance of flavors. It's tart without bite, thick without being viscous. The delectably messy lamb and feta burger ($9.99) combines ground lamb with Kalamata olives, feta cheese, and herbs. The hot, drippy, juicy wonder is served on a pita and loaded with thinly-sliced red onions, lettuce, and tomato, with tzatziki on the side. Normally served with fries, I opted for a side of onion rings (a $3 upcharge, but the best decision I made all day). They were thick, sweet, and crispy, and unlike so many others they stayed intact, bite after bite -- among the best I've had in Rochester.

On a rainy Sunday morning, Molly, her daughter Jocelyn, and I returned for breakfast. Jocelyn ordered and enthusiastically devoured the thick, crust-less cinnamon swirl French toast ($8.29), which Jines makes using a cinnamon roll loaf sourced from Baker Street. Fluffy and inherently sweet, it needed no syrup (but Jocelyn, being 13, well, you know...). Molly said she loved the moist and dense banana walnut bread French toast ($8.29), which similarly required no syrup, and received none. 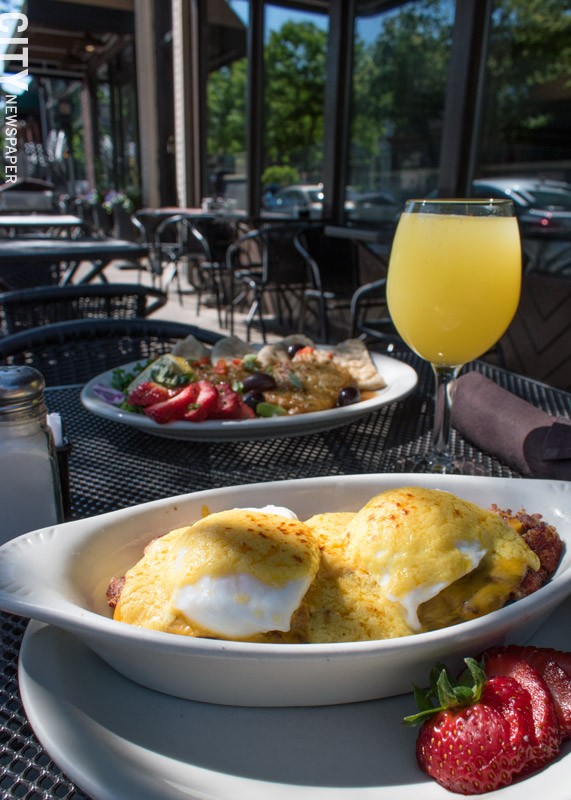 I don't typically get fired up about breakfast fare, but Jines's house-made hash benedict ($10.49) -- two poached eggs over corned beef hash on top of American cheese and a thick English muffin, drizzled with hollandaise sauce -- lit me up. The bold and toothsome chopped corned beef had me at first bite. We also all shared a plate of home fries. No matter where, I always request home fries cooked till crispy. Rarely am I rewarded, but Jines delivered them expertly browned and ideally seasoned, not just salted.