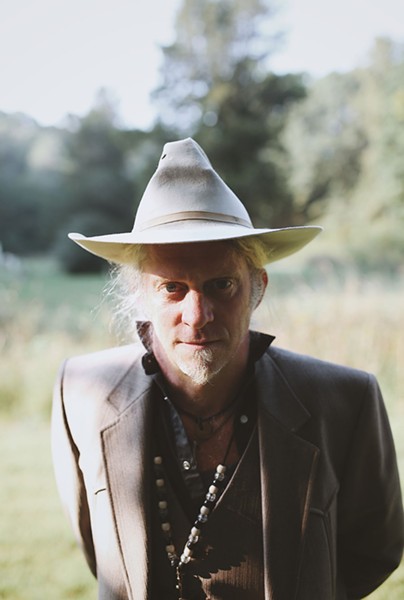 Guitarist Jimbo Mathus's latest long-player, the aptly titled "Incinerator," is a righteous romp through the swamp. It haunts to the peal of the Southern Gothic bell. It's a Dixie-fried barn-burner, and Mathus fiddles while it burns.

Mississippi's Mathus has been grinding out material at a prolific rate. He has recorded with and led a number of bands, releasing 14 albums in all. He has created music with Jimbo Mathus and Knockdown South, Jimbo Mathus and His Knockdown Society, Jimbo Mathus and Tri-State Coalition (with Jim and Luther Dickinson), and various inceptions thereof. Mathus salutes the South he comes from — his South, with its history, deep-seeded tradition, and mystery.

But it's as a founding member of the Squirrel Nut Zippers that Jimbo Mathus became a household name.

It was 1993, and swing was in full swing. Everyone was jumpin', jivin', and wailin'. Squirrel Nut Zippers had a big hit with "Hell," off the album "Hot." With that record, the band toured the world with its rag-tag, Tin Pan Alley strain that came on riotously loose and hopelessly celebratory — like a band on a sinking boat.

Squirrel Nut Zippers broke up in 2000 and Mathus returned to Mississippi, but he continued touring and writing relentlessly. Released last April, "Incinerator" is the result of the man's fire and drive. It's the blues, and yet it's more than the blues, what with its spiritual complexity and Mathus's ultra-unflappable cool.

We had speaks with Mathus briefly between one of his jaunts upon the endless black ribbon, to see what he's up to and to get his take on all things Mathus. An edited transcript follows.

CITY: What are you currently working on?

What is one thing you know to be true?

Time waits for no man.

Your music is a mix. What's in there?

I'm steeped in the Southern musical tradition since birth and passionate about learning all I can about the entire American musical experience. I'm fiercely devoted to continuing extreme creative concoctions.

"Incinerator" is a wild ride. What determined how the sound came out? How did it reveal itself to you?

It is a meditation on life and death, through my perspective, recorded and produced by a group of very simpatico cohorts.

How do you keep the Deep South in your music?

I live it every day of my life. Talking, interacting, and reading.

What is something you've tried lately that you haven't done before?

What's something you haven't done yet?

How did your time with Squirrel Nut Zippers serve to shape and change your music? Or was it the other way around?

Zippers are a totally unique concoction of mine that really plays by no normal rules and encompasses a large amount of time and research. That's a too-complex question to answer briefly.

You play regularly at Morgan Freeman's Ground Zero Blues Club in Clarksdale. What's that like? What's he like?

Morgan is a fellow Mississippian and, being such, we share a very similar background, lexicon, and worldview.

You've also said songwriting is a form of ancestor worship. That's beautiful. What do you mean?

I realized here at age 52 after decades of writing, recording, touring, and producing, that the real value of my best work is memorializing people in my life. Many now passed into other realms; "Incinerator" is like a cemetery with tombstones, people, and events — memorialized to go and pay your respects to.

How's it all gonna end? What'll they say about Jimbo Mathus when he's gone?