Jill Stein and the politics of courage 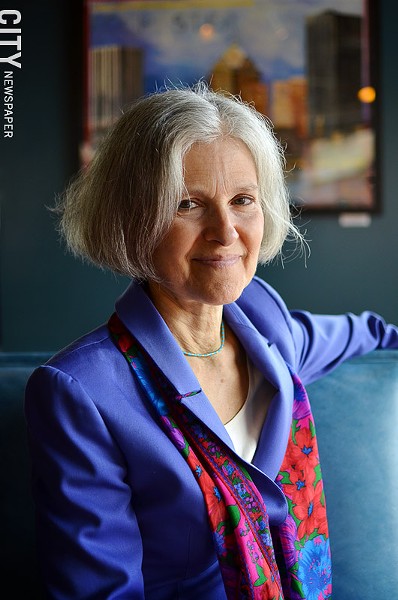 Despite the public's frequent frustration with the quality of candidates for elected office, third parties have historically had trouble gaining traction. They lack the money and other resources necessary to be competitive.

But third parties have had success pushing issues into the mainstream — forcing the major party candidates to pay attention. The abolition, women's suffrage, and labor movements all had their own political parties that eventually got government to act on their issues, says Jill Stein, the Green Party's candidate for president.

Stein was in Rochester last week, delivering a harsh critique of the Obama administration's record on civil rights and national defense. As examples, she cited the administration's fight to continue indefinite definitions and the increasing use of drone warfare in places like Pakistan, Yemen, and Somalia.

"We have really poisoned public opinion against us with a military effort that has incredibly high civilian casualties," Stein says. "When you're dropping bombs on weddings and funerals, it's not a good way to win the hearts and minds of the Middle East."

CITY: How do you respond to people who say that third parties siphon votes from Democratic and Republican candidates?

Stein: If you look at the exit polls from Florida in 2000, they show that [former Green Party presidential candidate] Ralph Nader did not steal the election. The Supreme Court stole the election. And, in fact, Nader's voters, based on exit polling by CNN and others, came equally from Democrats and Republicans, and the vast majority of his voters didn't belong to either party.

This politics of fear that has told people "You don't dare stand up and vote for a third party," has brought us everything we were afraid of. All those progressives, people of conscience were told to be quiet and go with the lesser evil so you wouldn't get a president expanding the war, bailing out Wall Street, attacking immigrant rights, violating our civil liberties.

All of that we've gotten by the droves because we've been quiet.

What is your role in this presidential campaign?

While I'm not holding my breath that we're going to win the White House, I'm not ruling it out either because we are in really extraordinary times. Whether we win the White House this time or next time, the point is we are regaining our political voice and our political courage so that everyday people can once again have a word in this political system and take it back. We are only accelerating in the wrong direction under both corporate political parties.

We're looking at the continued offshoring of our jobs. Obama is negotiating another free-trade agreement right now, the Trans-Pacific Partnership, which will continue to offshore jobs, undermine wages at home, and actually compromise American sovereignty.

We're looking at attacks on Medicare and Social Security. There are hints right now from the White House that they are going to collaborate with Republicans to go after Social Security cost of living adjustments, which would be terrible. Social Security is barely keeping tens of millions of elders out of poverty and you start further compromising its already marginal payments, you've got big trouble.

You can't leave out the climate catastrophe that we are heading into full bore. And the president having given the thumbs up to all the "Drill, Baby, Drill" policies; the green light to fracking, which will have a huge impact on New York State, including some of the water that supplies this county. So the president has given the thumbs-up to all of that and undermined the international climate accords.

What's missing in the debate on taxes?

The big picture, I think, is missing from the debate. It's really important when you talk about taxes to look at how taxes add up and who is paying the burden overall.

When you look at income taxes, corporate taxes, payroll, sales, and so on, what you see is that there's been a massive transfer of taxation. Not only has wealth gone to the top, but middle income and working and low income people are paying high rates of taxation — especially when you look at the rise in property taxes and the dramatic drop in the upper income tax brackets.

We're calling for major categories of tax reform to create tax justice and relieve the excessive burden on working people. We're calling for taxing capital gains as income and, in fact, that is where the very richest people have their vast resources of wealth. So that is number one.

Number two, we need to tax Wall Street a small sales tax. If they paid one-half a percent, that would bring in $350 billion a year for things that we need to create a society that we all benefit from.

What other important issues are the Obama and Romney campaigns missing?

We need to create jobs, now, on an emergency basis. So we need to talk about how we get the economy back on track for working people. That's what the Green New Deal will do. By putting the dollars directly into job creation at the community level, we can get people back to work.

They're not talking about a real health-care solution. On one hand, Obama has the Affordable Care Act, which doesn't do the trick. I live in Massachusetts; we've had it for five years. It doesn't go very far and it helps one group at the cost of many other groups. So it helps the very poor in opening up care that they didn't have, but at the cost of the near poor, for whom costs skyrockets.

We're calling for Medicare for all. This is the only way that we're going to get to care that is affordable and truly comprehensive. This essentially means just drop the eligibility age on Medicare and fix the pharmaceutical boondoggle, Medicare Part D, so that we can actually negotiate and bring down the price of pharmaceuticals. That will put Medicare back on a steady financial footing. So the way to fix Medicare is by making it Medicare for all and ensuring that it's not being ripped off by private health insurance.

Realistically, what can be done to break the stranglehold corporations have on US politics?

I think 'we' is the operative word there. Throughout history, you can look back on when we have gotten really profound social change. The abolition of slavery, the American Revolution for that matter, Susan B. Anthony and the women's suffrage movement, and the labor movement — they've all taken a social movement on the ground and an independent political party that could drive that agenda into the mainstream and move it forward.

I think we're seeing that politics of courage on the ground now in the fight of the Chicago Teachers Union; in the fight of the union workers at Strong Memorial Hospital — they're standing up for their rights; in the fights to stop the Keystone pipeline; the efforts to blockade fracking sites, nuclear power plants; eviction blockades; student strikes to stop tuition hikes.

We're seeing the Occupy movement all over the country, which is still alive and well. Even though it's been evicted from its occupations, it's working to break up the big banks and to assist all those other good social movements that are in full force right now.

There is a social movement that's alive and well — it needs a political voice. And I think it's a psychological war at this point because that's the only tool that they have to use against us. We have the facts on our side, we have justice, we have the course of history on our side. If people actually cast off this politics of fear and took the politics of courage into the voting booth, we would see politics turned on its head in the course of this election.