The learning in listening 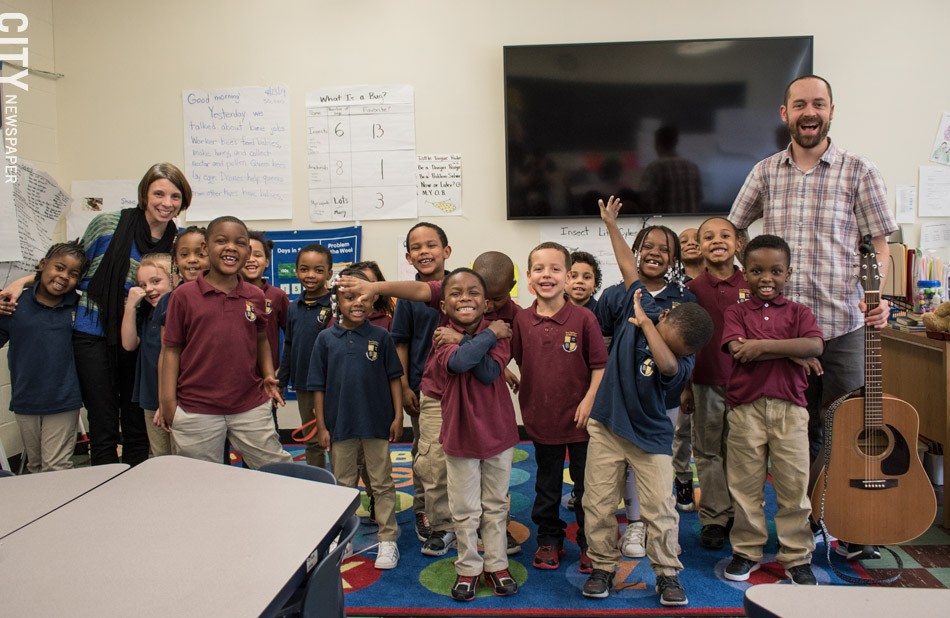 [ UPDATED AND REVISED 5/28/19 ] It’s a fire drill of kids bouncing about as if they were made of rubber. It’s a cacophony with everything on 10. It’s loud, full of shrieks and shouts and little ones running about. Nobody walks or has an indoor voice here. This lively bunch consists of boys and girls attending the Rochester Academy Charter School, or RACS, in Irondequoit, waiting for their weekly music class to start with Jesse Sprinkle. His wife Amanda, who volunteers with the class,  helps corral the kindergarteners. It’s like herding cats.

It’s all salutations and high fives as they make their way into the classroom. The Sprinkles have an immediate effect on the kids. There is no less energy, but the kids slowly begin to focus.

“It’s that Sprinkle kindness,” Wilkinson says. “That Sprinkle calmness. Mr. and Mrs. Sprinkle are truly a model of the character attributes that we want to see in our students. And that isn’t something the students embodied at first.”
Wilkinson says the Rochester Academy Charter School began in 2018 with kindergarten and first grade. Her job was to put the program together. This included inviting Sprinkle on board.

“So I started syncing curriculum, and that included the musical curriculum,” Wilkinson says. “When Jesse brought instruments in, there was a point where the kids couldn’t touch anything. They needed to just listen and it was truly a therapeutic moment. Now they have the shakers in their hands, we have a drum in there. There’s a guitar I donated.”

But Sprinkle doesn’t just want them singing and playing. “I want them to reach down deep and hear the different instruments in a recording,” he says.

To understand the challenge, you have to understand a little about what charter schools do.

“Charter schools are public schools,” Wilkinson says. “About 96 percent of our students are from the Rochester City School District. It’s a school choice with smaller class size and more opportunities for music. This music program is very unique to here.”

There’s money to be juggled as well.

“New York State requires that students have a musical experience of some sort, one day a week,” Wilkinson says. “Although we’re a public school, we don’t get the funding that the other schools do. We do receive some public funding. We as leaders have to be creative in finding ways to bring unique experiences to the classroom with little to no money. We have to use money very, very wisely. I think all schools need to do that.”

So how did Sprinkle get here? Surely some days he asks himself the same question, when reflecting on what he’s done in his career: playing drums in rock bands such as Poor Old Lu and Dead Poetic; teaching kids in Uganda about music; running his successful Blue Brick recording studio in Avon. He believes all these things have led up to this challenge.

“There are projects and things I’ve done that have been preparing me,” he says. “I first started traveling to Africa in 2008 and started here in 2018. It was like 10 years of prepping me for the chaos and beauty.”

Sprinkle concentrates on the beauty. “I usually see the good stuff with the kids," he says. “But it is a little frustrating when they don’t listen.”

Wilkinson saw what Sprinkle did with a Livingston County grant, working with fourth graders at a school in Avon to record an album, called “Bricks That Build,” and she liked what she saw.

“We had taken on the Livingston County Grant, which we used to record an album with the fourth grade class in Avon,” Sprinkle says. “They helped with concepts. We would throw out ideas, I would take lots of notes, go home and make songs out of them.”

In bringing this approach to RACS, the school administration didn’t put any restrictions on Sprinkle. “At the charter school, they needed someone to be the ‘music teacher,’ with no specific needs — just to see where things went,” Sprinkle says. “It was really open after that. They didn’t have any expectations.”

Sprinkle and his Avon kids are working on a 14-song follow-up record. And he’s recorded a CD with the RACS kindergarteners and first graders, a swell piece of wax entitled “The Springtime EP.”

If you want a clear-cut definition of the phrase “unbridled joy,” just check out Sprinkle playing his guitar and singing as 20 or so kids dance, clap their hands, and sing their heads off.

Although it’s too early in the program for a statistical analysis, Sprinkle’s music program has had tangible benefits in RACS students’ character development, according to Wilkinson.

“I may never see the benefits,” Sprinkle says. “People want to see results and I may never see those results. But I’m OK with it. I have to believe I’m doing the right thing at the moment.”

“The Springtime EP” — Jesse Sprinkle’s recording collaboration with his kindergarten and first grade students at Rochester Academy Charter School — as well as “Bricks That Build” and other albums, can be found at jessesprinkle.bandcamp.com.

An earlier version of this article incorrectly stated, in the opening paragraph, that both kindergarteners and first graders were waiting for music class to begin. In that instance, it was a class of kindergarteners. Also, Principal Wilkinson had been quoted as saying that 99 percent of the students are from the Rochester City School District. The correct percentage is about 96 percent.