Giving the drummer his due 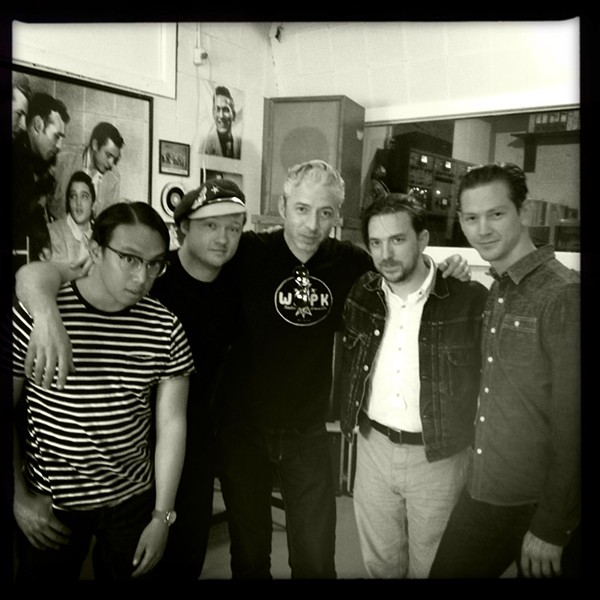 For 29 of the 35 years that drummer Jason Smay has spent on the globe, his snappy beats have gotten asses out of seats and started them shaking. An amazingly solid, in-the-pocket performer, he's kept time with an array of classic rock 'n' rollers. Smay has done time — and kept it — in groups like Steve Grills and the Roadmasters, The Frantic Flattops (with yours truly), The Lustre Kings, The Hi-Risers, and Los Straitjackets. His current gig is with the rhythm-and-blues rocker from Broken Arrow, Oklahoma, JD McPherson.

With the release of "Signs and Signifiers," McPherson has exploded on the scene, turning heads with his incendiary shows, showing up in music rags all over the map, being named by NPR as an "Artist You Should Know," and appearing on "Late Night with Conan O'Brien," "The Late Show with David Letterman," and "The Tonight Show with Jay Leno."

"My dad played drums in the 1960's," Smay says. "But just for fun. My parents couldn't afford a saxophone. So, in about the third grade, I started banging away on my dad's drums. He used to always tell me, 'If you want to play rock 'n' roll that's fine, but you should play jazz first to get some background. If you want to be anybody, you've got to start out on jazz first."

His parents arranged for lessons from teachers who covered the ins and outs of a musician's life, along with the paradiddles and fills. "My parents always found guys that were working musicians," says Smay. "As opposed to guys who were just teachers with no life experience."

Smay began hitting open-mic nights and sitting in with more seasoned cats, some more than twice his age. "I always seemed to hook up with older guys because of my taste in music," he says. "I played with Steve Grills when I was like 20. Before that, I was playing with Janet Beaman, who has since passed away."

But Smay's road to the road began with local trio The Hi-Risers. Smay had to light the fuse and get the band on the road once he joined.

"It was more a sense of, why not?" he says. "Greg [Townson] had toured a bunch. And I was like, 'I've got this connection in Chicago, I've got this connection in New York.' And I guess I didn't take no for an answer. I pushed and pushed and pushed, and you know, who doesn't want to do that stuff?...I played with those guys for about 10 years and in that time I had joined Los Straitjackets."

Head Straitjacket Eddie Angel had first caught wind of Smay's tenacious trap-set prowess when The Lustre Kings (with Smay on drums) backed him up on one of his "Guitar Party" tours. Angel also took the Hi-Risers, who were also on Angel's Spinout Record label, on a three-week Christmas tour. So when a spot on the throne opened up, Smay got the call, packed his drums, and donned a Luchador mask. For roughly four years Smay was in both bands, and even got Hi-Riser guitarist Townson a slot in Los Straitjackets when the band's second guitarist was diagnosed with cancer.

But Smay was forced to choose when he joined McPherson and the tour demands doubled.

"It went from 100 nights a year to 200 nights a year," he says. "I used to have more time on my hands to sit and enjoy music. But it's getting harder and harder." But he's happy where he's at, and at the success he's enjoying.

"I think it's one of those things where it's a quality product and it stands out," he says of McPherson's music. "But there's also that X-factor of the right place at the right time. I really love rhythm and blues — Chicago-style rhythm and blues — it's my first love and this is in that vein. But the lyrics are a little more modern, so it's not dated."

McPherson and his band have hit some enviable working-musician milestones, like recording at the legendary Sun Studios in Memphis, and appearing on national TV. On that last score, Smay had to fend for his drums as well as beat on them. David Letterman wanted Smay's drums — bad.

The band is recording its second album — the first with Smay — in September at bass player Jimmy Sutton's Hi-Style Studios. and plans to continue circling the globe. Smay comes home often to his wife and three sons (ages 11, 7, and 4) and to wrench on his late 70's Monte Carlo or old Shovel Head.

Smay says he's going to stick this one out. You've got to wonder what band could call to make him jump ship.

"I don't know, man," he says. "All the groups I like are no longer together."