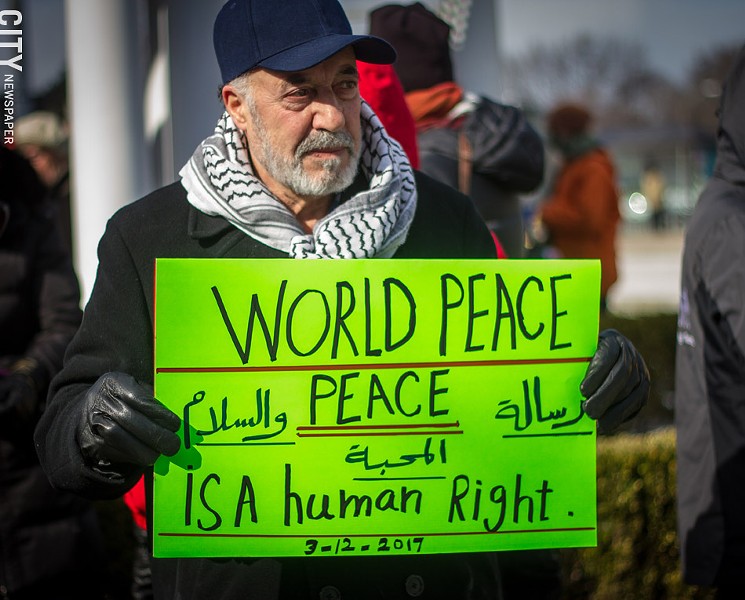 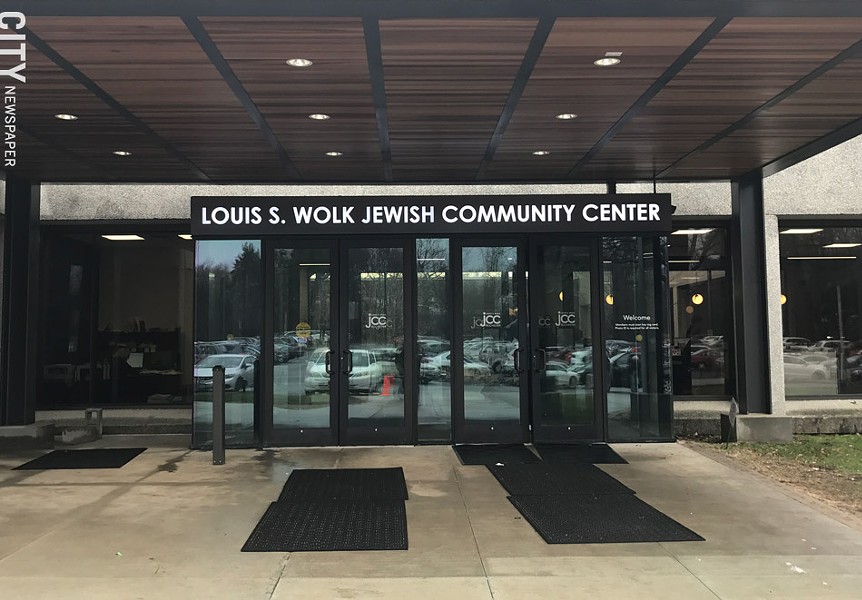 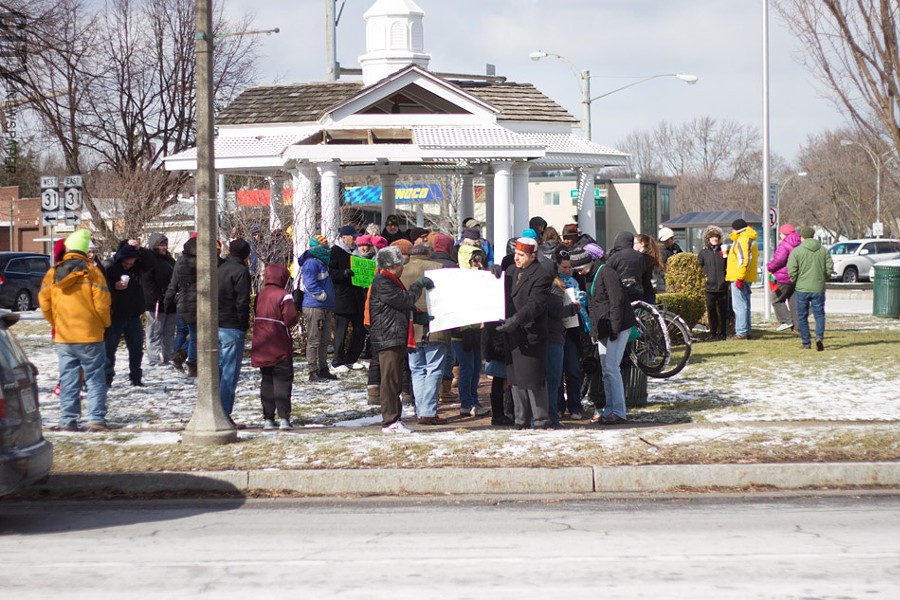 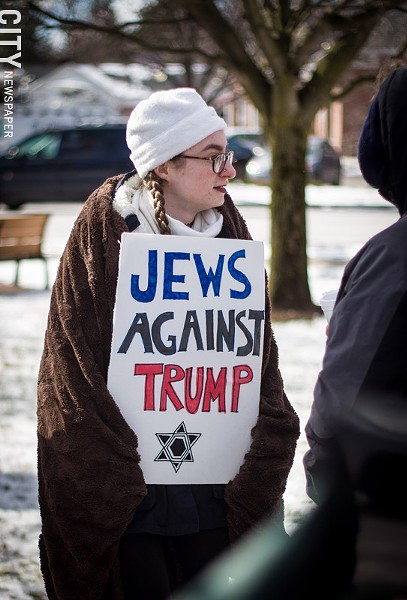 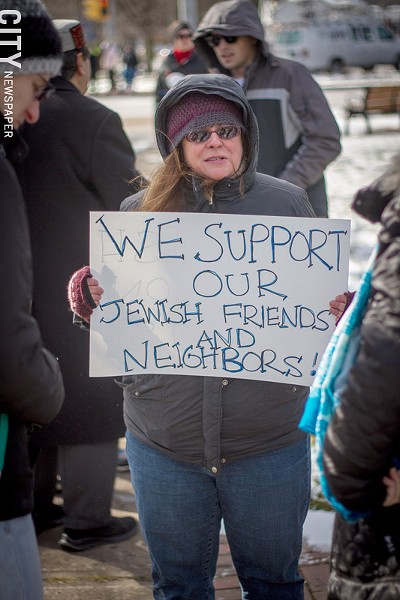 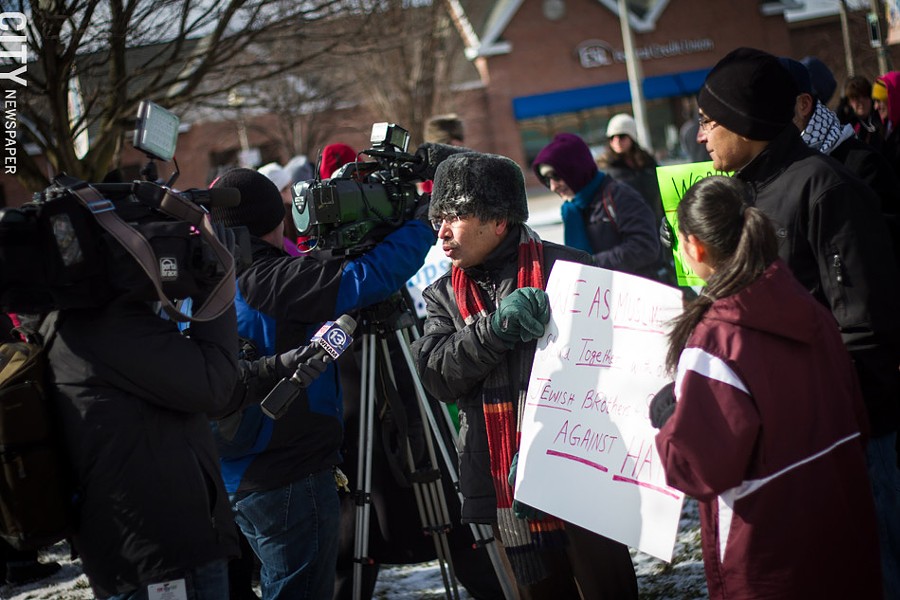 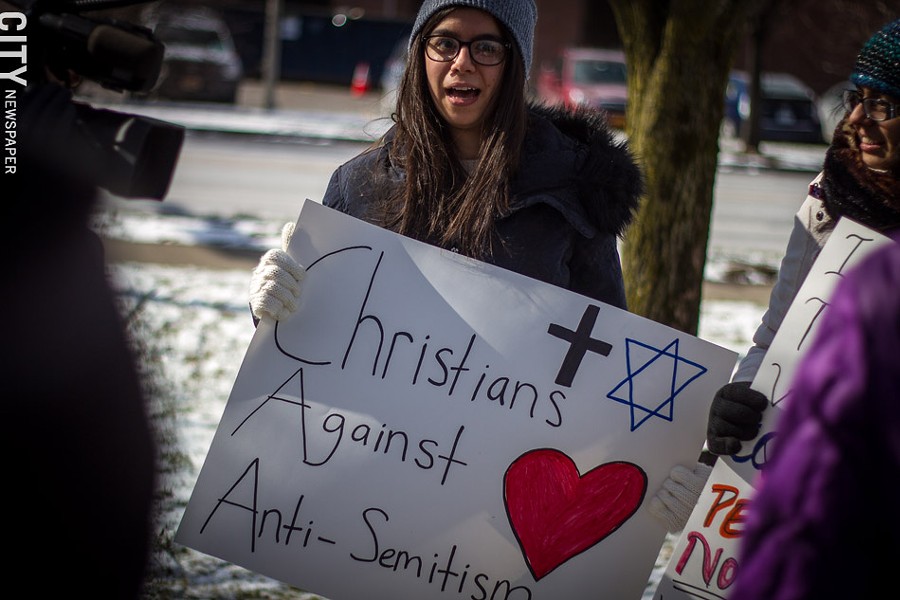 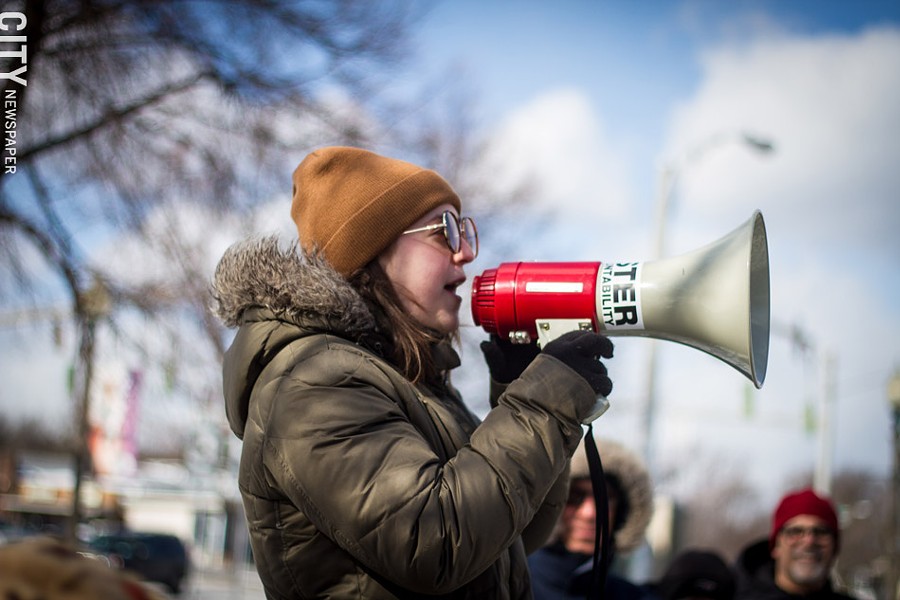 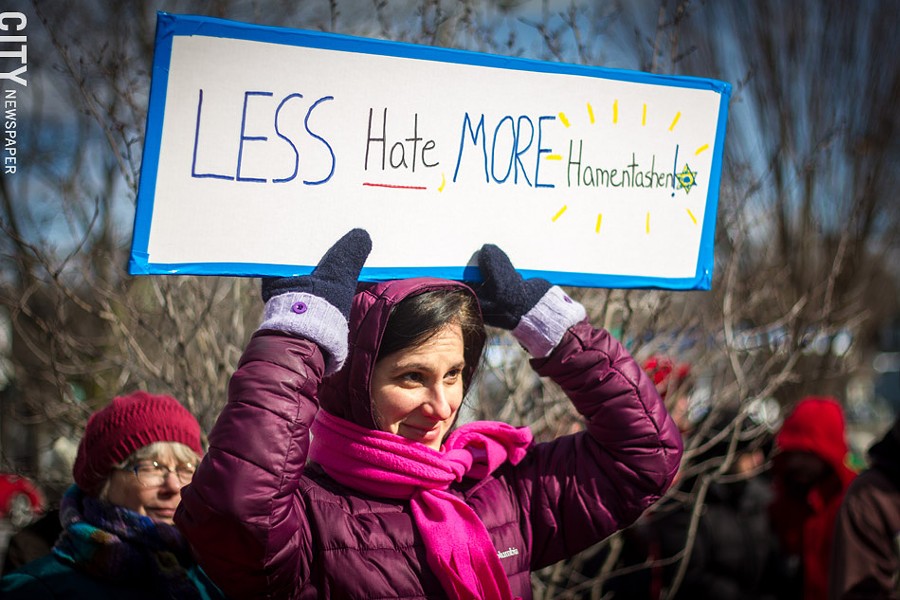 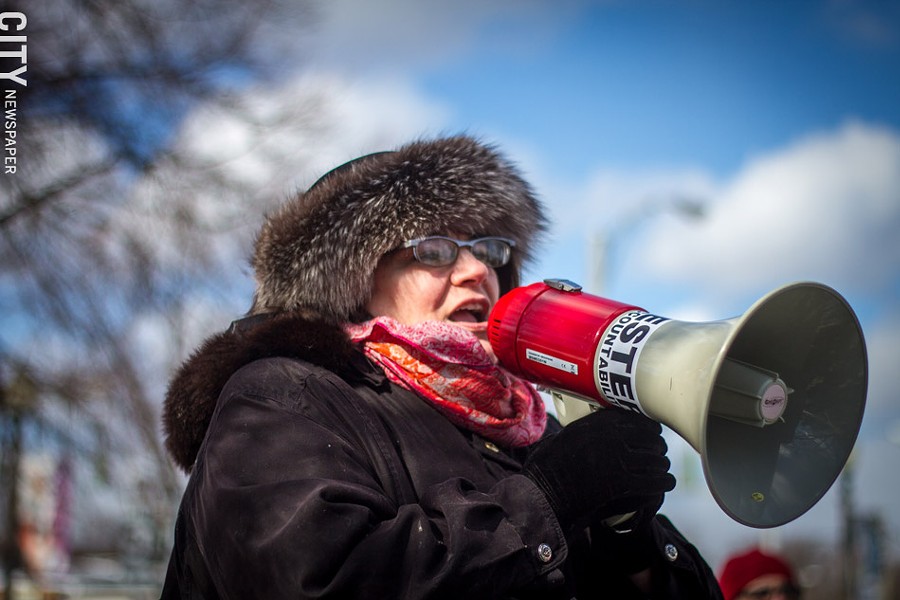 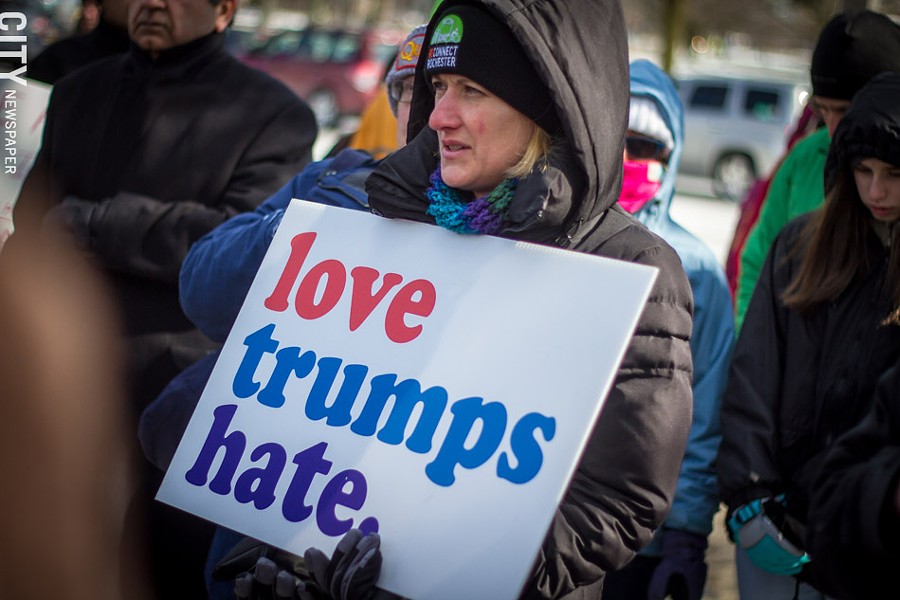 PHOTO BY KEVIN FULLER
[UPDATED March 23] Since this article was written, a 19-year-old Israeli man has been arrested in Israel and is suspected of carrying out at least some of the threats against Jewish Community Centers and other Jewish institutions. Clearly I was off base in assuming that all of the threats were anti-Semitic.

That doesn't account for the damage to Jewish cemeteries in Rochester and other locations, which the Israeli man could not have carried out. And as members of the Jewish community know, it does not mean that anti-Semitism is not flourishing, in the US and elsewhere. Nor does it negate proof of the ethnic hatred that continues to be spewed out - visibly - in the US. But I drew a conclusion about these particular threats that was unfounded. That's a breach of journalistic standards. Readers who have said I should apologize are correct. I should, and I do.
— Mary Anna Towler

Hate is living among us. Someone with a deep, dangerous loathing – of Jews and heaven knows who else – is spreading fear, here and throughout the country.

I’ve been picturing the Rochester terrorist as a single individual – one of our neighbors, working at one of our companies, shopping alongside us in our stores, driving our streets, and plotting the next move. But it could be more than one person. Maybe the Rochester terrorist doesn’t even live here. Maybe this stuff is emanating from some central headquarters somewhere. The attacks on cemeteries, though – in Rochester, in St. Louis, in Philadelphia – suggest chillingly that locals are either involved or are mimicking the e-mail terrorism.

Also chilling are the signs that these are coordinated attacks: individual acts in places hundreds of miles apart, on the same day. Rochester’s JCC was one of seven hit by the threats on Sunday. The others were in Wilmington, Delaware; Indianapolis; Beachwood, Ohio; Houston, Milwaukee, and Vancouver.

According to the Anti-Defamation League, that makes 117 Jewish facilities that have received bomb threats since January 1. Most of the facilities have been Jewish Community Centers, but the terrorism has also specifically targeted children: day-care centers, pre-schools, grade schools, high schools, and a children’s museum have all received threats.

And the desecration in the cemeteries took place during the same period.

Who is doing this? And why?

Rochester’s terrorist isn’t alone. Is someone or a group of someones organizing this stuff? Or are anti-Semites acting independently, feeding off of the numerous internet sites that spread white supremacist and Christian-identity rantings?

The FBI is pursuing the “who.” That leaves the “why.” Why this hatred toward Jews?

Jews aren’t alone, of course. A recent Washington Post article cited other recent hate crimes: In Florida, a man tried to set fire to a convenience store he mistakenly thought was owned by Muslims. The 64-year-old man arrested for the incident said he wanted to “run the Arabs out of our country,” according to the Post. (The store’s owners are Indian.)

In Washington State, a Sikh man was shot in his driveway. “The gunman reportedly told him to ‘Go back to your own country,” the Washington Post’s report said.

In February, a gunman shot two fellow patrons at a bar in Kansas, reportedly yelling “Get out of our country” before firing. Both of his targets were from India. He killed one and injured another, along with another bar patron.

Anti-Jewish, anti-black, anti-Muslim… none of this is new, of course. But it has come out in the open, and intensified, in the past year, as Donald Trump made the demeaning of others acceptable.

I don’t think for a minute that Donald Trump is purposely encouraging the attacks aimed at American Jews, or that he condones them. So much of what he does is performance art that he may have intended simply to play to his base. Or show off. But he bears responsibility for what is happening. Words matter. And words embolden, particularly when someone with great stature and authority utters them.

Here at home on Sunday afternoon, 12 Corners in Brighton was the site of a rally to express solidarity with the Jewish community. The event had been planned days previously, after the first threat to the JCC, but Sunday’s bomb threat heightened its importance.

And as one of our photographers was standing on the corner of Winton and Monroe as the rally progressed, he watched as a car drove by and the driver yelled out the window at the rally crowd: “Donald Trump!”