PHOTO BY DAVID ANDREATTA The outdoor Dawn Lipson Canalside Stage at the JCC of Greater Rochester can accommodate up to 500 people.
A tented outdoor stage on the tennis courts of the Jewish Community Center of Greater Rochester will be the site of a new collaborative performing arts series this summer.

The Dawn Lipson Canalside Stage will host a variety of concerts, theatrical performances, and film screenings, beginning on June 5 with an encore performance of “You’ve Got a Friend: The Music of Carole King and James Taylor” and concluding in September with Rochester Fringe Festival performances yet to be announced.

“I'm literally thrilled to stand here at the Dawn Lipson Canalside Stage and announce the arts are back,” Ralph Meranto, JCC CenterStage Theatre’s artistic director, said Wednesday in announcing the series. “The arts are alive, and the arts are a vital part of our community's economic and cultural health.”

The Canalside Stage series is presented by JCC CenterStage, in partnership with several local performing arts groups — including the Rochester Philharmonic Orchestra, Blackfriars Theatre, and the youth theater company A Magical Journey Thru STAGES.

“We could have just come out here and done it alone,” Meranto said. “But instead, we knew that the campus and the infrastructure here had the potential to be something that the broader arts community could really share, and that we could have a varied group of events out here.”

Concerts at Canalside range from orchestral performances by the RPO (July 16 and Aug. 6) to the Grateful Dead-inspired jam band Terrapin Flyer (July 4), and the Allman Brothers tribute band Live at the Fillmore (Aug. 7), to Rochester native and “America’s Got Talent” finalist Daniel Emmet on Aug. 29.

RELATED: JCC CenterStage takes it outside 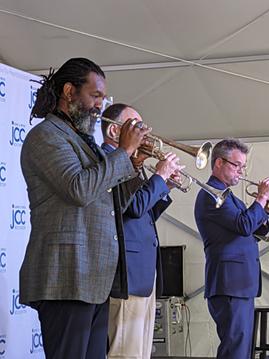 Additional events include screenings of family-friendly movies such as “Homeward Bound: the Incredible Journey” and “Big Hero 6,” as well as a performance of “The Big Wigs Under the Big Top” by local drag icons Mrs. Kasha Davis and Miss Aggy Dune. The stage will also host the Rochester Jewish Film Festival, Aug. 1 through 8.

“We're coming through the other side of this pandemic,” said Monroe County Executive Adam Bello, who was on hand for the announcement. “ So it's time to get back outside again, do what we love to do: Be a community again, be around each other again. And what better way to do that than through public displays and performances, and public art?”

The Canalside Stage at the JCC will also feature several events for children, including Kids’ Concerts by the RPO on June 26 and July 25, and performances of Disney’s “The Jungle Book KIDS” and “Frozen Jr.,” presented by STAGES.

Most Canalside Stage events will be open to all ages, although some of the concerts will have age restrictions. The venue itself — the covered tent with distanced seating and the surrounding tennis courts — can accommodate up to 280 people, including 90 attendees under the tent with physical distancing guidelines in place. Without such guidelines, the venue has a maximum capacity of 500, with 150 patrons under the tent. 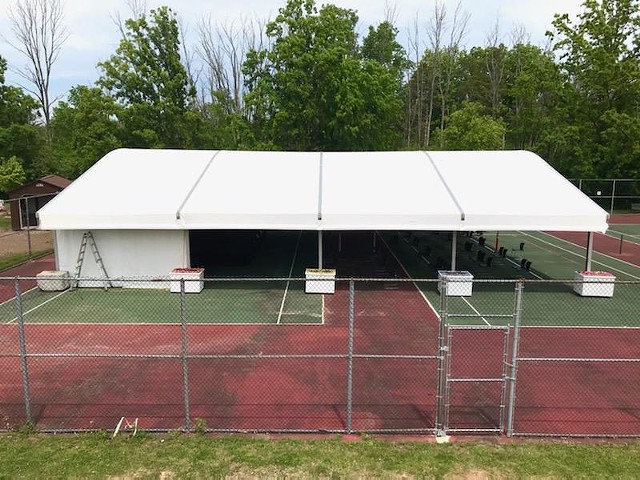 “Capacity limits in our traditional indoor arts venues inspired the creation of the JCC Canalside performing arts venue,” said Josh Weinstein, the JCC’s chief executive officer. “This venue is not simply a solution to today's need, but an innovative opportunity that the JCC intends to expand in the years to come.”

All events are rain-or-shine, with free parking and handicapped accessibility. For the complete lineup of Canalside Stage events and ticket information, go to jccrochester.org/canalside.