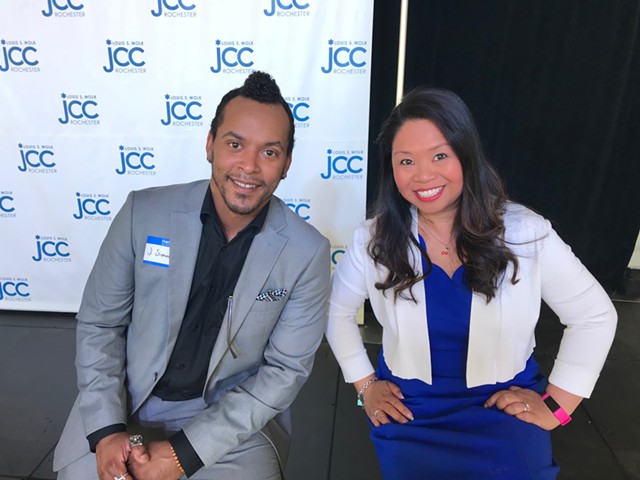 In an age of emails, texts, and social media, Jennifer Galvez Caton wants to bring back letter writing. Good, old-fashioned stamped letters that arrive in the mailbox.

Her appreciation for writing inspired her selection of “Love Letters” by A.R. Gurney, the production Caton is spearheading — and co-starring in — this Sunday, June 27, 2 p.m. at Dawn Lipson Canalside Stage at the JCC in Rochester. But her purpose in producing the show is much more activist in nature.

As Caton watched and read stories of Asian American hate crimes over the past year, she felt powerless to create change. At the same time, her career in the arts — Caton’s background is in performance, events and nonprofit administration — was almost nonexistent due to the pandemic.

“I’m not one to get out and protest,” says Caton. “I wanted to create art to raise awareness for inclusivity in the arts in Rochester, while holding a fundraiser for one of my very favorite local theaters.”

“I thought, I want to do a play where you can see people of color fall in love,” Caton says.

And for those familiar with the play, this is nontraditional casting, to say the least.

“Love Letters” begins in the late 1930s and follows the lives of two childhood friends, through the lens of their letters, over more than five decades. Because the characters are written as New England WASPs (white, Anglo-Saxon Protestants), the roles are usually played by two middle-aged white people.

In 1992, the play was adapted into Urdu and an Indian context, and toured internationally, including the U.S., Europe, and Pakistan. Otherwise, throughout dozens of productions around the world, there has been only one notable instance where a person of color was cast, when James Earl Jones performed opposite Elizabeth Taylor during a 2007 fundraiser for Taylor’s AIDS foundation.

“This show has also been done several times in Rochester, but never with actors of color,” says Caton. “It’s always been a goal of mine.”

Because “Love Letters” is written as a staged reading, anyone who performs it is encouraged to rehearse sparsely and avoid memorizing; the material should feel fresh even to those reading it. There is no set, and there are no costumes. Just two humans reading and writing letters from separate places.

“After the first (few) minutes, you won’t even remember we are actors of color,” Caton says. “You just want to know what happens to these characters, you become invested in their journey.”

“Love Letters” is a live, in-person event at the JCC’s outdoor venue, Dawn Lipson Canalside Stage, 1200 Edgewood Avenue. Per the lifting of NYS COVID-19 restrictions, masks are welcome but not required. Tickets are $18 for open air, $25 for under the tent. For more info, go to jccrochester.org/events/love-letters.

Leah Stacy is a freelance writer for CITY. Feedback on this article can be directed to dkushner@rochester-citynews.com.