JCC's 'On the Market' is a Hallmark comedy about grief 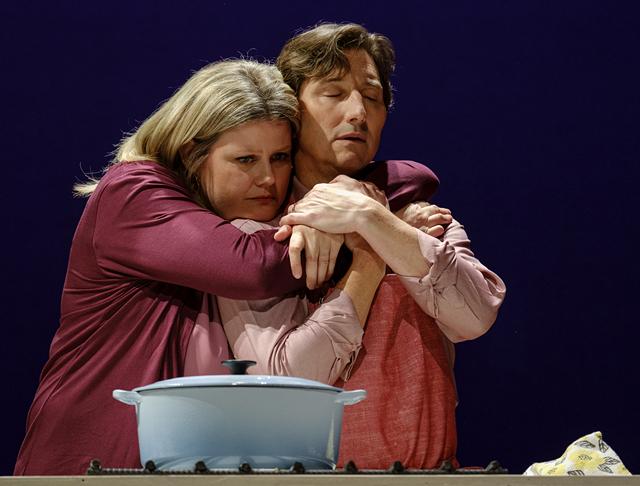 Grief is an odd topic for a romantic comedy, but “On the Market” is less about finding love and more about coping with losing it. This world premiere by Jason Odell Williams, playing at the JCC CenterStage through Oct. 23, centers on a widowed real estate agent haunted by her deceased husband. Not literally haunted. This isn’t a ghost story, though it is larger-than-life.

It’s been almost two and a half years since Charlotte, played by Beth Winslow, lost her husband to prostate cancer, and she’s still feeling stuck. In theory, she wants to fall in love again, but if she were ready — well, then there wouldn’t be a play. Through dream sequences, her dating life and career get tangled together: She compares herself, as a single woman, to a house on the market.

Her coworkers are certainly ready for her to find someone new. Her boss and closest friend Diane hatches schemes to force Charlotte into dating, meddling in her life with a bizarre obsession similar to Paula’s from “Crazy Ex-Girlfriend.” Charlotte’s coworker Frank, the dorky, baseball-obsessed Abbott to her Costello (as Diane calls them), has been pining over her for 10 years and hopes that when she moves on, it’ll be with him.

The ensemble — D. Scott Adams as Frank, Esther Winter as Diane, and John Winter as the deceased husband James — play an impressive array of other characters, including a therapist, a delivery man, and a rotating door selection of horrendously bad dates and obnoxious potential buyers. The actors deploy over the top mannerisms and goofy accents to differentiate each caricature. The quickly changing roles speed past the opportunity to give the recurring characters much substance, but gives the show as a whole an upbeat energy.

The set is simple, evoking several locations mostly through furniture: three hanging pots for a kitchen, a couch for a living room, some chairs and a table with flowers for a restaurant. An outline of a roof serves as a constant reminder of the housing metaphor. While the scenic design by Stephen Reszitnyk is low-key, Norah Ryan’s lighting design is an experimental explosion of colors. Almost every scene is doused in lush blues or rosy pinks, making the already outlandish scenarios feel even more fantastical.

The one constant amidst the whirlwind of lights and goofy characters is Charlotte, who tends to be a little too constant. Although facts are gradually revealed about her, such as she likes to sing, has a daughter at NYU, and was in the Israeli military, her personality is dominated by a one-note portrayal of her grief. She tells a therapist early on that she’s in denial, and the play reiterates this over and over, often with some fun theatricality. For example, the first man she feels excited to start dating is a smooth-talking potential buyer played by Winter. The script pokes fun at his resemblance to James, played by the same actor.

Winslow plays Charlotte as a woman constantly putting up walls, using jokes to deflect her pain. Even before she becomes a widow, in a flashback where she learns James may have cancer, she banters her way out of a hard conversation. James points out her lack of support, but quickly lets it go and finishes cooking dinner. He remains an idealized husband, Charlotte remains in denial, and the play offers only a superficial look at what they meant to each other. It’s as if, like Charlotte, the whole production would prefer to hide behind jokes about what could be found up someone’s butt in a colonoscopy than to fully flesh out its characters and their grief.

The dialogue is snappy and sprinkled with pop culture references, including to Hallmark movies, which is a good comparison for this play’s tone. Though raunchier and smarter than a typical Hallmark, Charlotte’s journey with grief culminates in an outlandish coincidence and a heartfelt goodbye, delivered with cheesy instrumental music.

Hallmark movies prove there can be a charm in situations too absurd to be plausible, and characters too hollow to feel like real people. This play may barely scratch the surface in exploring death and grief, but it’s likely to please those in the market for some feel-good, “everything will be okay” escapism.

"On the Market" runs at JCC CenterStage through Oct. 23. For more information and tickets, go to jccrochester.org/events/on-the-market.