June 05, 2018
The CenterStage at the Jewish Community Center has announced its upcoming season of plays and musicals, which provided information states, “is a celebration of people and events that left a lasting impact on the world we live in.” This is the CenterStage's 42nd season.

Highlights of the six-show 2018-19 season include four area premieres, including “Dogfight,” a musical adaptation of the 1991 film about three teens who, on the eve of their deployment to Vietnam, decide to play a cruel game to see who can seduce a local girl they’ve deemed ugly. 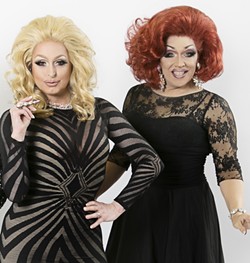 Other area premieres include “Becoming Dr. Ruth,” a celebration of America’s favorite radio and television  sex therapist who escaped the Nazis on the Kindertransport, became a sniper in Jerusalem, and struggled as a single mother in America; “The Legend of Georgia McBride,” about a down-on-his-luck Elvis impersonator who learns a thing or two from a pair of B-level drag queens (played by Mrs. Kasha Davis and Aggy Dune); and "Indecent," based on the true story of the first lesbian kiss on Broadway and the arrest of the cast for obscenity.

CenterStage will kick off the second half of its season with “The Hit Makers: The British Are Coming,” a jukebox musical that explores the cultural impact of the British Invasion, conceived by Artistic Director Ralph Meranto, written by Jack Garner, and with musical arrangements by Casey Filiaci. Songs by The Rolling Stones, The Who, The Beatles, The Hollies, The Kinks, and others are featured. The season ends with the Rodgers and Hammerstein classic "Oklahoma!"

All CenterStage performances take place in the Hart Theater at the JCC, which is equipped with an FM Hearing Assistance System, designated wheel chair seating, and ADA compliant bathroom, and at grade entrances. Select performances will feature Live Open Captioned performances for the deaf and hard of hearing. Individual tickets $33; $29 for JCC members; and $20 for students and youth. Subscription packages are available. 461-2000; jcccenterstage.org.

JCC CenterStage has also commissioned “Survivors,” an original new play by television and film screen writer and playwright Wendy Kout, based on the testimonies of 10 Rochester-based Holocaust survivors. After touring area schools and community groups, the play will make its world-premiere public performance on Tuesday, June 12 (also the birthdate of Anne Frank), at 7 p.m. in the JCC Hart Theater. Tickets are $18, and include a post-show talk-back with Kout and the production team. Premiere seating at $118 includes a pre-show meet-and-greet reception with Kout. 461-200; jccrochester.org.