Musician Jon Seiger returns from hearing loss, reclaims his own story of abuse

Jon Seiger was 32 years old when he lost his hearing to an infection. He calls the experience “surreal.”

“Just walking through the world and breathing and not hearing your own breath all of the sudden was very odd,” he says. “And it made life feel bizarre and surreal, and I was kind of separated from the world.”

Medical science — in his case, a cochlear implant in both ears — has allowed Seiger to return to his world: music. The Rochester musician plays trumpet and piano in the style of classic New Orleans jazz, and sings with the immediately recognizable gravel of Louis Armstrong. He’s been busy on the local club scene for years. And even with much of that shot down by the coronavirus pandemic, he still plays virtual gigs on his Facebook page every Saturday at 5 p.m.

The road to recovery was not easy to navigate. But the 59-year-old Seiger draws an interesting connection between the determination he had to call upon and an ongoing darkness throughout his life.


“The silver lining to having been abused by dozens, hundreds of adults growing up,” he says, “is I was pretty resilient.”

He had the best of music educations: the New England Conservatory of Music, and the nightclubs of New York City.

“I was very fortunate to still get to see and hear and work with a lot of the older first-wave jazz musicians who were around,” Seiger says. “And befriend some of them. All of the guys from Louis Armstrong’s band who survived when Louis died in ’71, I got to work with.

“It certainly brought it to life a lot more for me. I could look on TV and see The Beatles or, you know, Elvis Presley, or whatever. But I was there at Jimmy Ryan’s nightclub any night I wanted of the week to be there, listening to Roy Eldridge, and Sarah Vaughan would come in, or Earl Hines would come in, Dizzy would come in. So these were the legends of jazz and there they were; introduced to them, sitting down with them, and learning from them.” 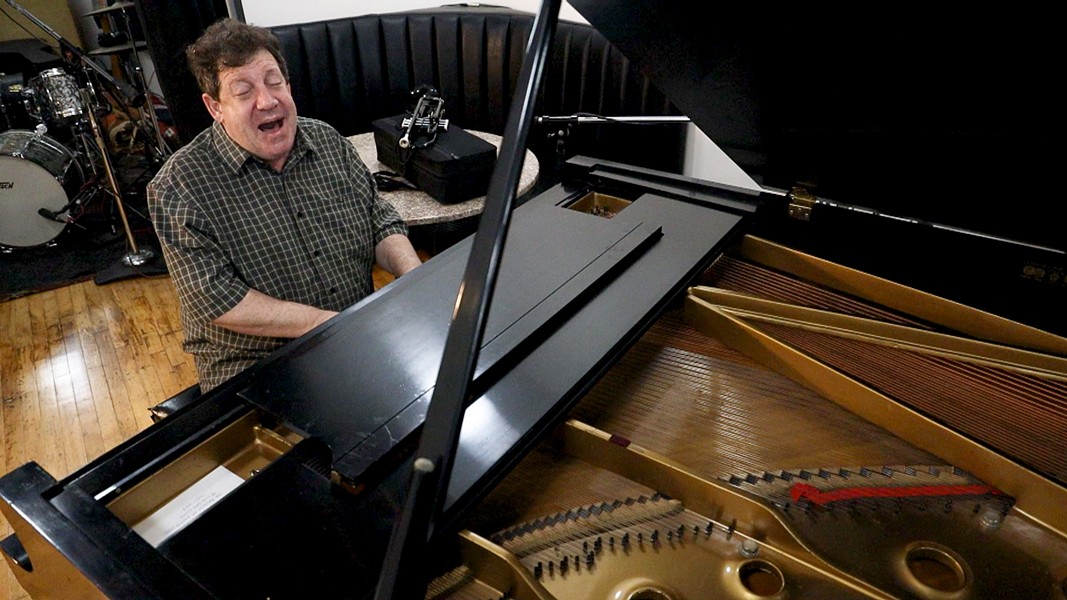 Seiger was a young music prodigy, but there was an early foreshadowing of what was to come. It was the Fourth of July, he fell and hit his head on a door frame and was taken to the emergency room. “There were lots of kids who were totally burned up from fireworks in the street,” he says. “I remember that vividly from 8 years old.”

Taking a back seat to more pressing cases, Seiger says careless treatment left him with an ear infection. He recovered. But much the same thing happened years later, while flying with his band to a gig in Columbus, Ohio. He felt pressure in his head and, “I did what you’re not supposed to do,” he says. “Hold your nose and blow.”

He popped both eardrums. With blood flowing out of his ears, he was taken to the hospital after the plane landed. “There was kind of a Doogie Howser kind of emergency room guy and again, people with, like, heart attacks and limbs missing got the A-list doctors. And I was not gonna die, so he’s, ‘Yeah, here, take some painkillers and you’ll be fine.’ ”

A fever and infection set in. Several operations couldn’t undo the damage. Seiger was a deaf musician.

“I had to stop playing music,” he says. “I didn’t know sign language and lip reading.” And New York City “was like a million nightclubs that I could and should be playing at.”

So he came to Rochester “for its high percentage of deaf people.”

He had resigned himself to the reality that, “I’ll be part of the deaf world at the time.”

The cochlear implant was a new reality. Electrical impulses carried to the brain by 22 tiny wires — plus two spares — replacing the 1,500 hair-like cilia of the middle ear.

"And the few people I know who were born deaf and got implants as adults hated them and it was an absolute cacophony of noise and they just never used them again. Or even went to the extent to have the implant removed, just because it was so terrible.”

That was Seiger’s initial experience.

“It was absolute electronic and noise and sounded like nothing I had ever heard before,” he says. “Everything, especially human voices, sounded like one of those larynx boxes.”

Yet Seiger persevered, and taught his brain how to interpret the electronic signals.

There was another challenge.

“The deaf culture, world, was not all that inviting to formerly hearing people,” he says. “If you weren’t born deaf and didn’t have deaf family members, you were not part of the club. Being physically deaf and not hearing was not the passkey to being in that thing.

"Does that mean all deaf people are like that? Of course not, I had and still have deaf friends," he says. "Then when I got the cochlear implant that was another like, you know, Dracula, you know, 'hold-the-cross-up moment against the vampire' thing. Because, at the time — this has changed a lot, this was 1999 — it was viewed as, people viewed the cochlear implants as a way to try to ruin, to kill deaf culture.

“Hey, it’s a personal choice for everybody.”

Seiger made his choice. But the traumas of his life had taken a serious toll.

“I kind of withdrew a little, I had to, because of the factor of it, made me withdraw a little,” he says. “And I was drinking and using drugs, and becoming depressed. Also the abuse stuff was coming back to me, so, that was when I had a ‘trying to kill myself’ moment. Not specifically about not playing music anymore, but just the limitations on my life, really in a larger sense.”

The abuse stuff. It first happened when Seiger was six years old, at the hands of an uncle who said he’d cut Seiger into pieces if he told. Like his hearing loss, it was a foreshadowing of what was to come. It caught up to him again at the Horace Mann School in the Bronx. A prestigious school whose graduates included U.S. Senator Jacob Javits, Governor Eliot Spitzer, U.S. Attorney General Bill Barr, and a pretty good football player for the school who would go on to write a little bit — Jack Kerouac.

In 2013, a group of former Horace Mann students, including Seiger, hired the high-profile attorney Gloria Allred to represent them in a suit against the school. But the statute of limitations had passed, and the suit went nowhere. But now, backed by the 2019 Child Victims Act, Seiger is currently involved in a lawsuit against a handful of New York City and New Jersey churches, where he alleges he was sexually abused while a member of the institutions’ choir and bands.

The details are horrifying. The story of a talented child, seeking approval, encouraged by elders, drawn behind closed doors, shamed into silence. His parents, divorced when Seiger was in the ninth grade, were disengaged, in another world; in fact, his mother wrote for the TV soap "Another World." Seiger’s story has been repeated in The New York Times, The New York Post, and People magazine. He talks about it freely now. It is his way of taking control of his own story.

It’s the abuse story that draws the attention. The music story is the one that moves Seiger forward.

“And whenever I am fortunate enough to play some of Louis’  music,” he says. “I hope and like and want to think that maybe I can keep just a little bit of the joy he wanted to give the world alive, and sometimes it works out. People say, ‘Man, I heard Louis live in 1954.' They’ll tell me about it, it was, ‘I closed my eyes and it was just like I was there.’