…and other Jazz Fest dispatches

Since the 5th Annual Rochester International Jazz Festival started on June 9, City Newspaper's music writers have been keeping tabs on the action at our Jazz Blog at www.rochester-citynews.com. The blog is updated daily with our critics' takes on what they saw the night before, and what they're looking forward to next. Below find a condensed, edited version of their notes from the first weekend of the festival. To get in on the action, make sure to check out the Jazz Blog every day for updates, and post your own comments.

I have to admit it, I was a little skeptical about Woody Allen before attending his band's concert at the Eastman Theatre. I love Broadway Danny Rose, but could this guy really play the clarinet?

I haven't seen Wild Man Blues (the documentary about his group, showing at 10 p.m. Wednesday, June 14, at the Little Theatre) so I didn't know him as a musician. I thought the band might just be a rich man's indulgence. It may very well be, but it's also a wonderful band with an uncanny New Orleans sound.

As for Woody: yes, the man can really play. He was capable of clear, gorgeous tone, but it was the upper and lower registers that proved most alluring. He often would stutter his notes in a manner reminiscent of those skinny, insecure characters wearing horn-rimmed glasses in Woody Allen movies. He was also capable of slithering around the great old melodies with the best of them.

Opening day and Mother Nature sucked...and she blew. People who lined up all the way down to East Avenue to get into Charlie Hunter's first show at Kilbourn Hall suffered the rain and wind for about two hours in order to suffer his long-winded soloing inside. He's good. Hell, he's great -- but entirely too technical for me. I mean, would hitting one wrong note really kill you?

Skated over to see Rachel Z at Max Of Eastman Place. She opened appropriately with "Autumn Leaves." She's beautiful but played the whole time with this expression like she smelled something sour. Hers was more conventional jazz than Hunter's and right up my alley.

Caught Duane Andrews Gypsy Jazz outside, where the beautifully rendered ghost of Django floated about in the Gibbs Street gale Then it was over to Montage where my pick of the night, Dr. Lonnie Smith with The Schonig /Henderson Trio, rocked the joint with velvety, lounge-y B-3. Chris Isaak once said the B-3 was like catsup 'cause it goes good with everything. The trio's drummer was hot too, opting to drum snare-less a few times and giving the drum decidedly bright toot and punch.

The Mahavishnu Project was in full swing when I got to Milestones. I don't really mean swing as in the style. These cats were relatively abstract and easily the loudest show of the night.

They say you never see it coming. Well, I never saw it coming. The microphone stand came sailing down like a machete threatening to part my skull. I instinctively dove to the side (Ron Netsky's lap to be exact) as it whizzed next to my ear. But as soon as it was on me it was snatched back up. The man at the other end laughing good-naturedly at me was James Brown. The Godfather of Soul then pulled me up apologetically, shook my hand and said "We're just havin' some fun up here." Man alive.

It was the best show I've ever seen. I could tell you how tight the band was, how deep the funk was, how hot the back up gals were, but I'm speechless. I'm still giddy. Didn't get to sleep til 5 a.m. I feel good. So I'll have to defer to Saby. Take it away....

I have never seen anything like what I witnessed last night. James Brown's band --- a funk orchestra, really --- was so tight it was scary.

The groove was so lethal, so potent, I almost got a kind of altitude sickness from it. I guess you get acclimated when you're exposed to super hi-octane soul for an hour and a half. From time to time it would hit me: how on earth does someone get a band to do this? I don't care how skilled the musicians are, it's obviously from James. He puts his foot to some invisible pedal and throttles bands to stratospheric heights.

He is obviously from another planet. This just isn't human. No, I'm not joking. This level of funk is something out of science fiction. It must come from an alien intelligence sent here to do our world some much-needed good. I'd bet James and his band travel around in a Death Star-like vehicle, cruising from galaxy to galaxy wherever they see a need. "Is there funk on other planets?" Don't dismiss the question --- as far as Brown and his band exist, I would wager that there is.

I chose to see JuanitoPascual, a guitarist whose mixture of flamenco, classical and jazz sounded intriguing in the sound clips on the RIJF web site (www.rochesterjazz.com). The set he played at Max's was heavily flamenco, with the exception of an unusual funk-inspired (but still flamenco) set closer. It was wonderful, one of the festival's finest concerts so far. 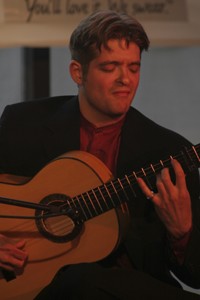 Pascual attended New England Conservatory and subscribes to former director GuntherSchuller's philosophy involving what he named Third Stream Music. Third Stream covers music in which cultural and genre boundaries become blurred or eliminated, allowing for the creation and expansion of forms. Pascual was a bit professorial himself, giving the audience lessons on the variety of flamenco styles in different areas of Spain. He also told funny stories about the reactions of Spaniards to an American who could really play flamenco. When he played the audience had no questions about that.

At first, during Rochester expatriates The Respect Sextet's first set outside on Gibbs, something felt off to me. As adventurous as I know Respect can be, the music sounded strangely...traditional to me. Ah, but soon the genius began to shine. Respect seems to do everything with a twist. As the set went on and gained in momentum, the band very cleverly unveiled its infectious sense of fun in layers. By the middle, they had the crowd in the palm of their hand, and it wasn't just made up of local fans who knew them from Eastman and Java's. A we-came, we-saw, we-conquered performance. Bravo!

Ended my night at Milestones with the tail end of the second set by Tim Posgate'sHornband, a quartet featuring tuba player Howard Johnson. The band plays with a dirty tone for an excellent balance against the horns' old-timey style. Posgate is excellent at adding color with off-notes and slightly askew chords. Together, the quartet made whimsical music that struck me for how groovin' it was without drums. Each player created a negative space for your mind to insert a groove. The latest album (self-titled) covers more varied moods than what I saw, achieving a somber beauty by the second track. You should check it out.

At the Billy Bang concert at Montage Grille, the place was packed to the rafters and in the crowd was Garth Fagan and a full table of dancers and associates. (Bang collaborated with him after his last RIJF appearance.) The crowd was excited based on the buzz from that previous performance. Throughout his set Bang expressed his amazement at the warmth of his Rochester reception. He was ecstatic.

So was the audience, because Bang and his band were absolutely thrilling. Rather than just play notes, Bang reinvents the violin. He approaches the instrument as a piece of wood with tight strings, capable of making myriad sounds depending on what you do with it. He strummed it, plucked it and bowed every inch of it in spiraling wails going up into the stratosphere.

On one piece, dedicated to the late Sun Ra, it was James Zollar, his excellent trumpet player, who took off first with a fiery solo on a par with Bang's innovations. Pianist Andrew Bemkey played in a percussive style reminiscent of the great Don Pullen. Like Bang, he treated his instrument as a textural collection of sounds to traverse. He would get so wound up in his solos, he was visibly shaken when he was finished with one.

Bang got so caught up in the performance, he got exhausted. At one point he turned things over to his group, left the stage, and passed by, heading to the bar, shaking his head and saying, "I'm gone, I'm gone." Toward the end of the tune, during Zollar's solo, he was headed back the other way, drink in hand, shouting, "Play it! Play it!"

At the end of his set, it was the audience's turn to shout. After sustained applause and a sincere standing ovation, a shout went up: "We want more! We want more!" I looked around the room. Fagan and his table were shouting the loudest. But nobody moved and Bang, totally exhausted, responded with a quieter, beautiful piece from a few decades ago. Finally satisfied, the audience began to leave. But not before half of them headed for the stage to thank the musicians.

Can it get any better than this?