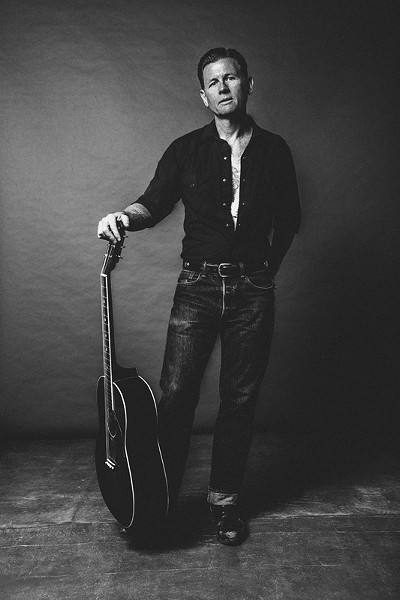 Jake La Botz found his music while searching for magic.

With JD McPherson and Woody Pines

There is a pervading darkness to Jake La Botz's music, a noirish narrative, haunting and hungry like a hellhound on his trail. His music is captivating; his words, prose. It's the blues on a cloudy night.

On his latest Hi-Style Records album, "Sunnyside," there is romance that leads to murder, inflatable ducks, and a positively mesmerizing account of life in a junky hotel. La Botz's guitar-playing is pure Piedmont, without it waxing too antique. He sticks in a nascent knife and gives it a twist.

"Sunnyside" isn't a museum piece. However, it does sound more yesterday than today. That's because of golden-eared producer Jimmy Sutton twiddlin' the knobs.

Just a week ago, "Sunnyside" won an Independent Music Award for Alternative Country Best Album along with Sutton who won the award for Best Producer in the Roots Country category.

"Some of the songs are just straight blues," La Botz says on the phone from his crib in Nashville. "There's a playfulness, too, but it's not so claustrophobic. You could be in the middle of Hell and still tell a joke."

La Botz is a fascinating individual. He learned to play the blues from Honeyboy Edwards, Homesick James, and "Maxwell Street" Jimmy Davis -- their influence slithers in and out of his guitar. Besides getting under the listener's skin with his music's epic simplicity, La Botz is an actor who you've no doubt seen playing roles in "Rambo," "Ghost World," and "On the Road," to name a few.

Somewhat of a factotum, this singer-songwriter has itchy feet. It's a transient wanderlust born of music, insight, and determination that was mired down in alcohol and drug addiction for a spell. Hell, he even used to write obituaries -- and still does in a way.

"Every song is an obituary to an experience that just happened," La Botz says. And while he has a wealth of stories to tell or obituaries to write, sometimes the man isn't sure who he is.

"Who am I?" he says. "This is a question I ask myself every day. I get up and feel so confused. I feel blurry."

La Botz says he starts to figure it out, "and honestly, I feel every single day this kind of coming together of all these elements in my life."

La Botz since 2001 has been practicing, studying, and teaching meditation within the Tibetan tradition of ChogyamTrungpa. He stumbled upon meditation while trying to rekindle his childlike fascination.

"Stumble is a pretty good word for it," he says. "I was a stumbling, falling down alcoholic and a nodding out heroin addict. And you know when you're a kid and things seem magical? When I was a kid growing up in Chicago, I felt there was kind of this magic and I wanted to get ahold of it. I wanted to know what it was. I wanted to follow it.

"So, like a lot of kids, I got a magic kit to perform tricks. But that wasn't quite magic enough. So I went to the occult bookstore down the street from my house to check out their groovy selection of spells and hypnotism and really whatever they had cooking in there."

La Botz remembers vividly a low point in his life that he's lucky to be here to tell: The night he overdosed on heroin in San Francisco at 21.

"My friend called the paramedics," he says. "And when they arrived I remember hearing them say, 'He's dead.' But I started to wake up as they were packing me up for the morgue." They checked him into the hospital, but he split in his hospital gown and got a cab back to the party where the OD occurred.

"I didn't want them shooting up my other bag of dope," he says.

According to La Botz, "The high point is now. I feel all of life, all that's happened up to now, has brought me to a point right here and it's kind of exciting."

La Botz finally cleaned up only to find he still faced the search for magic. It was still on. He found magic in literature and magic in music. But he wanted to know what underlies the guys that write the books and the music. What was beneath the whole thing?

So he tried what he calls a spiritual path. "I joined a black Baptist church and played guitar there in South Central Los Angeles. I checked out the whole Hindu guru scene. I started practicing Aikido -- a Japanese martial art. I tried a lot of stuff."

But it seemed whatever La Botz tried kept steering him back to meditation.

"This therapist I was seeing had a picture on the wall of this Tibetan guy in a Western-styled suit, and he looked so interesting to me. So finally I asked, 'Who is that guy?' And it was ChogyamTrungpa. So I started reading his books. I loved his sense of humor and directness and his point of view on life. I found a teacher, and now I teach it."

His music is dark and his life has had some overcast moments to say the least, and he musically conjures some dark characters, but La Botz doesn't consider himself a dark person. One wonders: Without his dark background, would his output be the same? He ponders the question for a moment.

"I don't know," he says. "But I'd certainly write different types of songs, that's for sure. I feel like now I write from the Hell realm of human experience. I feel like I relate to the depths of pain that go along with that."