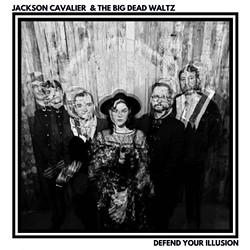 It takes boldness to incorporate a well-known Beatles lyric into your own song. But Jackson Cavalier’s got it in spades.

The rootsy singer-songwriter is widely known as a one-man band, strumming a Danelectro with a harmonica around his neck and stomping a kick drum. But his expansive fourth album, “Defend Your Illusion” — released Feb. 4 — finds him backed up by The Big Dead Waltz, a talented quartet that adds dimensionality to his bold playing.

On opener “Head Above Water,” he quotes an iconic line from “Help!” (“I was so much younger than today'') to evoke a sense of innocence, then twists it: “When I discovered exactly what it takes to break somebody’s heart.”


It helps that he delivers such sentiments in his croaky voice, which often finds a pretty counterpoint in the harmonies of band member Devon Rose. The pair’s vocals help the album’s Americana cuts come to twangy life, though Cavalier refers to “Defend Your Illusion” as “post-Americana” for the way it spans genres.

“Is this pearly cocaine heaven, man, or heroin hell?” he sings near the album’s close. “I’m just one bad Fentanyl trip from that graveyard bell.”


“Trying Times,” meanwhile, pairs the frustration and boredom in its lyrics with a languid backbeat and wide-open chords. “Miss going outside, yeah, I miss my friends,” he sings. “Wonder how everyone's doing these days.”

Cavalier doesn’t offer much optimism on the song, but his real-life actions have given plenty of reason for hope. He launched a quarantine cover-song challenge in 2020 and organized a local mini-festival last summer at Abilene Bar & Lounge.
It’s hard not to conjure memories of early pandemic-era malaise and uncertainty in his image of “sitting round the apartment doing nothing all day.” And yet, three tracks later, he’s offering a sunny reprieve over saloon piano: “Things will be better, I swear it's true.”

The Big Dead Waltz will make your feet move. A Beatles reference might perk up your ears. Ultimately, Cavalier’s sharp songwriting gives “Defend Your Illusion” its staying power.

Patrick Hosken is a freelance writer for CITY. Feedback on this article can be directed to dkushner@rochester-citynews.com.