It's the season for eating well 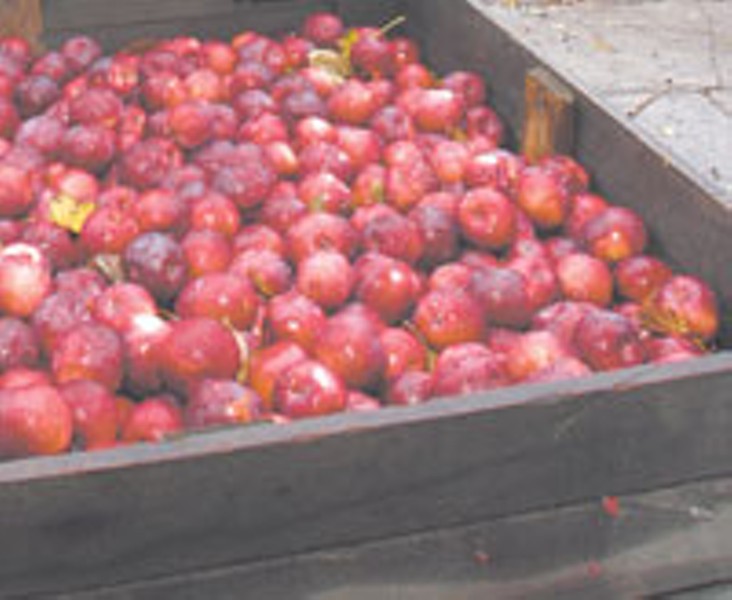 Kurt Brownell Schutts for cider! Apples from the fall harvest.

"It is a time when every cook wishes time could stand still and the bounty of the fall last forever." So says Max chef-owner Tony Gullace, and you'll get no argument from the dozens of food-loving friends who jumped to say what they like best about food in the fall. Tony sees a time for the slow cooking of meats: 7-hour leg of lamb, duck confit with plump white beans and sage, Guinness-braised Waygu short rib with creamy polenta, veal osso buccu.

Freelance arts reporter Isobel Neuberger concurs, saying, "the first hint of fall means lamb stew. Always has, always will. Must be something about a return to slow cooking: browning the meat, adding spices and herbs, and letting it get itself together for a couple of hours in the oven."

Foodie Gordon Anderson sent an enormous list of fall loves which included "steaming vats of choucroute" and slowly-braised short ribs. He also hit some of the responders' recurring themes: apples, fruit pies and tarts "fresh from the oven," and seasonal vegetables like beets.

"Hardly had to think two seconds," said Rev. Corey Keyes, a contributor to City's Family Valued. "My favorite activity is taking the family to the Apple Farm in Victor; grabbing a few big bags; climbing on the wagon and heading out into the orchards to pick a variety of the freshest, crispest apples around; then coming home to cook apple sauce, bake pies, and roast cored apples stuffed with brown sugar and raisins."

"CIDER!" says Karin Cross, one of the best cooks I know. "I've tried lots of recipes to doctor up cider: mulling spices, adding cinnamon or cinnamon candies, cranberry, maple, even hot buttered cider. Inevitably, I come back to cold cider in its purest form, straight from the jug. My choice has always been Schutts Farm Market in Webster. Bring your own jug, they fill it up!"

Transplanted upstate choreographer Randee Paufvee "freaks out" at the Berkeley Bowl apple selection. She tells me she "just ate a cold little red one with a Japanese name, somewhere between a Gala and a Fuji. Then I nearly ruined my apple happiness with a banana, stupid banana."

From hot Houston, my brother Nat welcomes a season "when outdoor cookery becomes thinkable again." He looks forward to local oysters, and wild dove breasts (if, as he says, you know the right rednecks).

My sister-in-law, Martha Terilli, has mixed emotions about the obligatory apple farm trips. "Getting into the harvest spirit this way," she explains, "can cost you quite a bit; the mazes, wagon rides, and those irresistible fresh pies can make for an expensive outing. Am I teaching my children that in order to experience the harvest tide, one simply buys it for an afternoon?"

She recounts a story of bringing her children and her mother on such an outing. "When the pumpkins were loaded and the pie stowed safely away, I helped my mother into the car, and sat back with a big sigh. I was sweaty, broke, and a little cranky, having done the Western New York fall ritual yet again."

"But what stands out in my mind," she goes on, "was our station wagon parked alone in a beautiful apple orchard, glorious Red Delicious apples pressing against the windshield. As I turned to point out the picture to my kids, I stopped short. There sat my mother, patiently waiting, silver hair and crimson sweater lovely against the green leaves and red apples. I vowed to remember that image of her."

City Newspaper contributor Craig Brownlie, like many, got nostalgic, though in his slightly sarcastic way. "As the sun heads south, I hearken back to the days of my youth and the county fair which marks my personal autumn," he writes. "Lo, these shortening days, I sip the sweet bitterness of the Lemon Shake. Aye, we must not forgo the corndog --- no we must not, for it is an unknowable meat within a mostly cooked batter. I am called home to eat these things and to see the 400 lb. pumpkin."

At Casa Wilcocki, fall is apples, munched copiously and turned into sauce by my daughter, Iris. It's the weekly roasting of beets, the cooking of richer greens, and looking forward to the first freeze that brings the best Brussels sprouts. It's our favorite season, beautiful, slightly sad, and poetic.

And so, summing up, an impromptu poem by my friend Sean Bahner-Guhin:

"Roadside produce stands
fresh soil sticking still
to the unwaxed skin of cucumbers
you smell uncut
Corn so sweet it qualifies as vegetable candy
No factory food this, but as it was for ages
No pricetags, just handwritten signs of "3 for $1"
and a payment box set on the corner
make your own change
honor systems that work
with those who live by the seasons."