If you get hungry while driving through the Finger Lakes, make a stop in Ithaca to fill up.

According to the all-too-true joke, 'round these parts there are only two seasons: winter and roadwork. But there's actually a third: leaf-peeping season. Watching the trees abandon their lush jewel tones in favor of a fleeting, fiery splendor is one of New York State's genuine pleasures, and the Finger Lakes set the perfect stage.

The ephemeral beauty of the morphing leaves also provides an airtight excuse for a trip to Ithaca at the southern end of Cayuga Lake, the longest of the glacier-etched digits. Beyond the changing leaves, other great reasons to make the roughly 2-hour drive this fall include Jeff Tweedy performing at the State Theater on September 24 and the mighty Tompkins County Library Book Sale in October as well as the chance to chomp your way through Ithaca's vibrant food scene like Pac-Man.

Keep reading for some tasty places to check out when you go. But first, a stop for lunch...

If you happen to travel down Seneca Lake's Route 14 on your way to Ithaca, you could do a winery tour — or you could go on a wienery tour, which would be quicker because there's really just the one. Opened in May, the FLX Wienery is a killer little roadside joint that offers nicely priced burgers, hots, sausages, toppings, and sides, with most of the menu components house-made or locally sourced. You'll find impressive builds like the K-Town burger, gilded with kimchi, fried egg, and Korean barbecue sauce; and anyone gone gluten-free should dig the corn-dog option in lieu of a bun. Want more? Buckwheat salad, cinnamon doughnuts, Oreo-stout milkshakes. You get the idea. (5090 Route 14, Dundee. 607-243-7100; flxwienery.com)

It goes down five days a week in various locations around town, but on weekends you'll find the Ithaca Farmers' Market on the waterfront at Steamboat Landing. There are, of course, many vendors selling fresh produce and handcrafted wares, but remember to bring your appetite so you can enjoy traditional flavors from far-flung locales like Sri Lanka, Cambodia, and Tibet. There's also baked goods, macrobiotic cooking, and Cuban Food You'll Never Forget, which is actually the very confident name of the place. (545 3rd Street, Ithaca. 607-273-7109; ithacamarket.com) 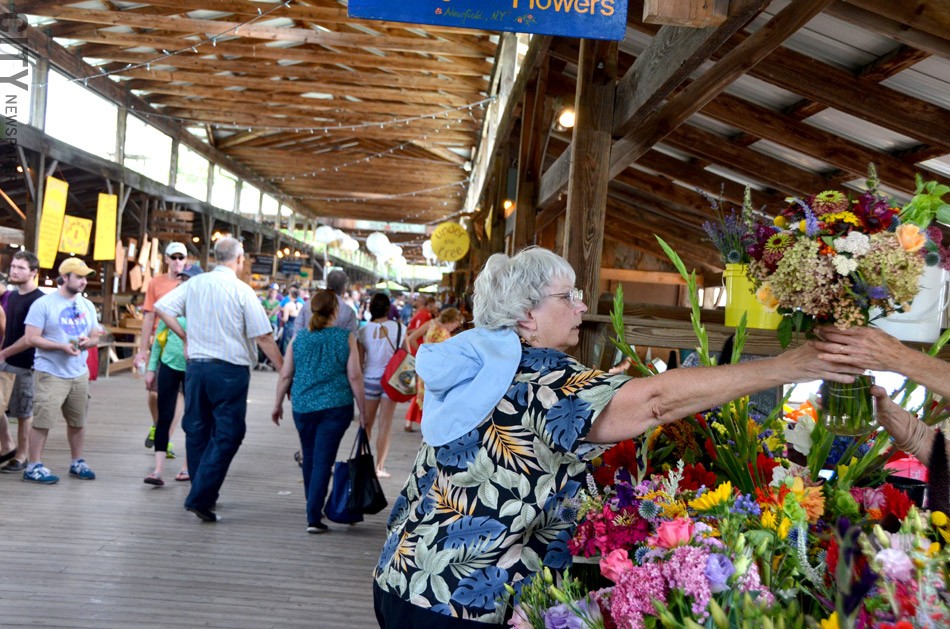 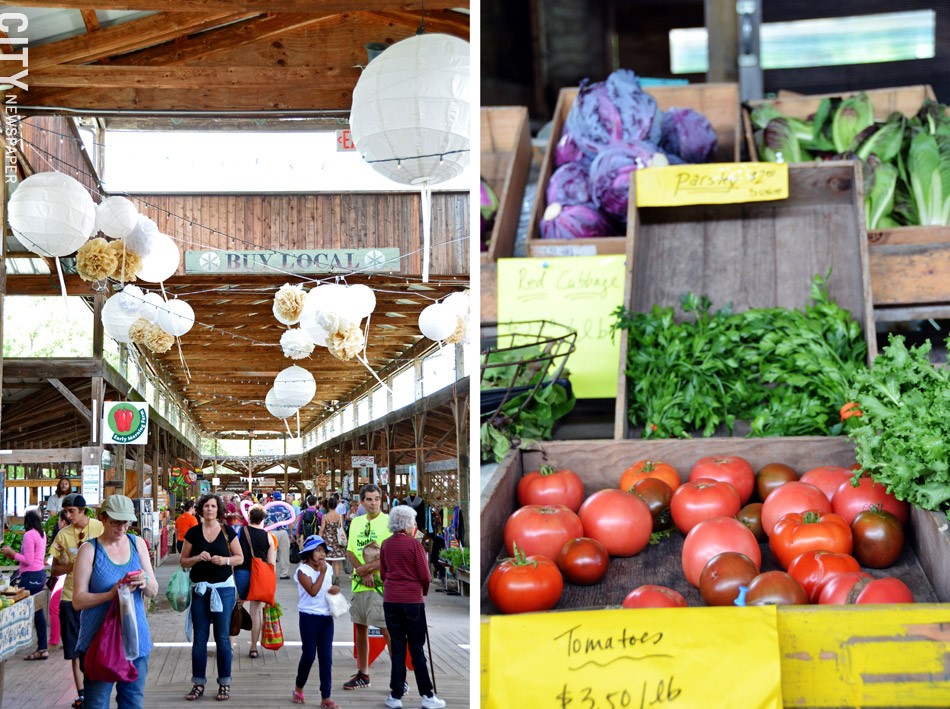 No trip to Ithaca is complete without a visit to the Commons. After you've had your way with Autumn Leaves Bookstore and Angry Mom Records, pop on over to Waffle Frolic for, you know, a waffle! Choose from four different bases, including a delicious vegan/gluten-free option, then customize to your heart's content with oodles of toppings, be they sweet or savory, snack or meal. There are smoothies and coffee drinks, too. (146 E. State Street, Ithaca. 607-319-0999; wafflefrolicking.com)

A nifty, stylish spot at which to chill during any Ithaca adventure, Felicia's Atomic Lounge serves up well-balanced craft cocktails, many of them mixed with house-made infusions like Earl Grey gin, raspberry brandy, and fig bourbon. (A recent seasonal favorite was the Sun Gold Zinger, made with gin, honey, lemon, and bartender-harvested cherry tomatoes.) Felicia's Atomic Lounge also serves vegetarian flatbread pizzas and vegan cupcakes, and it hosts a popular Sunday brunch with even more imaginative libations. (508 W. State Street, Ithaca. 607-273-2219; atomicloungeithaca.com)

Bandwagon Brew Pub is one of those subterranean watering holes in which you can't tell whether it's day or night — and sometimes that's exactly what you require. This cozy pub offers rotating craft drafts along with house-brewed selections, most of them making their way into affordable flights along with variously sized pours. Cocktails and wine are also available, as is a menu that combines bar-food favorites with salads, sandwiches, and entrées inspired by flavors from around the globe. (114 N. Cayuga Street, Ithaca. 607-319-0699; bandwagonbeer.com)


Seafood fans likely already know about Maxie's Supper Club, a New Orleans-style fish house smack-dab in the middle of Ithaca. It dishes up Southern staples like barbecue, jambalaya, and po' boys — keeping the vegetarians in mind with meatless versions of each. The daily happy hour, from 4 p.m. to 6 p.m., showcases freshly shucked oysters and clams for half-price, making it the ideal place for a pre-dinner pause. (635 W. State Street, Ithaca. 607-272-4136; maxies.com)

If you're anything like me, you don't want a big bowl of one thing at mealtime; you want tiny plates of many things. With the addition of some carefully chosen wines, that's tapas in a nutshell. Just A Taste is where Ithaca goes to get tapas done right. Like any restaurant worth its salt, the menu here is locally sourced whenever possible and evolves with the seasons. A recent incarnation featured bites like squash-blossom hush puppies, house-made jagerwurst with cherry-braised cabbage, Basque-style lamb, baby kale salad with goat cheese and tomato vinaigrette, and a traditional tortilla Española. (116 N. Aurora Street, Ithaca. 607-277-9463; Just-a-taste.com)

Yeah, Purity Ice Cream Co. carries cupcakes and pies and coffee, but who cares in the face of all that ice cream? Purity's signature flavor might be Finger Lakes Tourist, consisting of chocolate ice cream with white chocolate chunks and hazelnuts, but you'll also find sea-salt caramel, Gimme! Coffee mocha, Boomberry (that's vanilla ice cream with four different kinds of berries), and chocolate-dipped strawberry. Plus, there's sherbet and frozen yogurt, all waiting to be piled into a sundae, whipped into a shake, or nestled into a cone, even a gluten-free cone! (700 Cascadilla Street, Ithaca. 607-272-1545; purityicecream.com)

It's just such a rush, stepping into a gleaming pastry shop and gawking with saucer eyes at the gorgeous treats so meticulously displayed. Obviously you can't leave empty-handed, but even if you're not in the market for a towering cake, Sarah's Patisserie has got you covered. Among the more portable constructions are filled chocolates and a colorful array of macarons, available in flavors like peanut butter-banana, maple-rosemary, and blueberry-lavender. Plus, with a base consisting of ground almonds and egg whites, it's practically health food, right? (130 E. Seneca Street, Ithaca. 607-319-0272; sarahspatisserie.com)

What's your favorite Ithaca dining spot? Let us know in the comments section, below.