Irondequoit waives library fines on items for children and teens

PHOTO BY MAX SCHULTE Riona Thomas, 3, reads "Tickle Time!" at a window of the Irondequoit Public Library. The library is eliminating late fee charges on items geared toward children and young adults.
The Irondequoit Public Library is closing the book on charging fines for overdue materials geared toward children and teenagers, becoming the first suburban library in Monroe County to follow a trend sweeping libraries nationwide.

The reprieve, which is to begin Monday, is a two-year pilot program that the library expects to make permanent in time. The program would do away with late fees of 35 cents a day, but patrons would still be responsible for replacing items deemed lost.

Library Director Greg Benoit explained that the new policy is intended to promote access to books and other services the library offers to young people who cannot afford to pay the penalties for late returns.

“It’s actually very common for us to have a teenager come to the library . . . and then we find that when they go to check out items that they need for school or even for leisure reading that they have fines on their card from five, six, seven years ago that they are on the book to pay but are preventing them from checking items out,” Benoit said. “More often than not, these teenagers were small children when those fines were assessed to their account.” 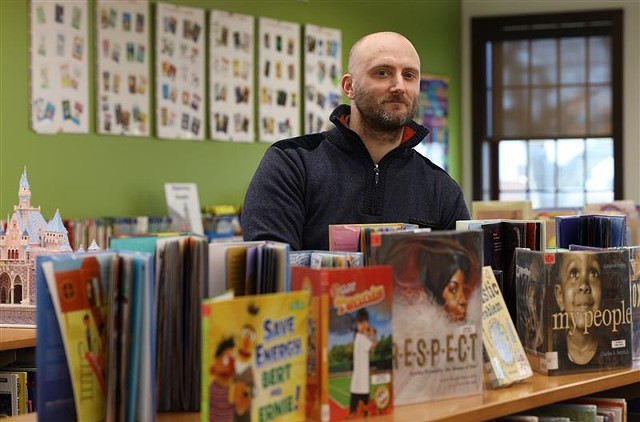 The average tab for a young patron with late fees is about $15, according to the library.

Libraries across the country have been eliminating fines to one degree or another since the American Library Association recommended doing so in 2012 as a way to remove barriers to access among the needy.

The association said outstanding fines not only prevented violators from borrowing books, but discouraged them from partaking in other services. A few years later, the Chicago Public Library instituted a one-time amnesty program that reportedly resulted in $800,000 in overdue materials being returned and 15,000 people either being added as new patrons or having their borrowing privileges reinstated.

Likewise, the Rochester Public Library permanently did away with fines for children’s items in 2017 after a one-year pilot program saw a 10-percent jump in library cards being issued. The move also led to more materials being checked out after two years of decline.

The Fairport Public Library has temporarily waived fines on children's materials during construction on the village's lift bridge that has closed the main arterial though town.

Eliminating overdue fines has generated some controversy. Critics complain that penalties serve as an incentive, a tangible reminder of a patron’s civic duty to return borrowed materials.

Rei Thomas, who was visiting the Irondequoit Public Library with her 3-year-old daughter Riona on a recent weekday, said she understood the argument, but believed that dropping fines would help the library further its mission.

At the Irondequoit Public Library, fines and replacement charges on materials geared toward children and teenagers total between $30,000 and $40,000 annually, out of an operating budget of $2.6 million, according to the library.

Benoit said eliminating fines during the pilot program will be covered by a $25,000 state grant and a 5-cent increase in the cost of photocopies. But ultimately, he said, the library expects to phase out the fines for young patrons altogether.

“Truthfully,” Benoit said, “we don’t need that 35 cents as much as we need our children to enjoy the process of learning.”