January 12, 2021
Irondequoit Supervisor Dave Seeley announced Tuesday the he would not seek re-election later this year, saying that he hoped to further his career in a role that helps advance the public good for his town and the broader community.

Seeley, a Democrat, ascended to the position of supervisor through a series of trickle-down appointments in 2016. That year, the governor appointed then Supervisor Adam Bello to the role of Monroe County Clerk to fill a vacancy, and Seeley, then a town council member, was appointed by the council to fill the supervisor role.

He won a special election later that year and then was re-elected to two consecutive two-year terms in 2017 and 2019. 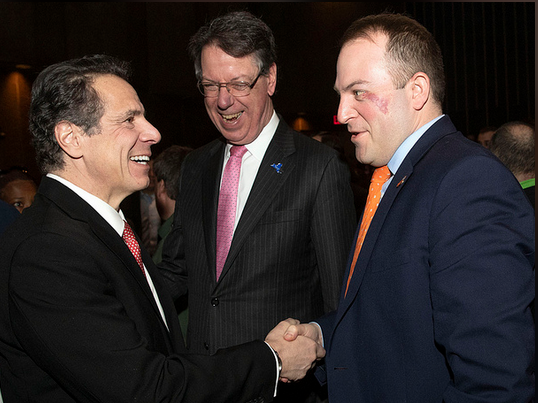 In a prepared statement, Seeley, 39, called the supervisor job "the best job I have ever held, and likely ever will."

He said in a subsequent phone interview that he had no work lined up, but alluded to wanting to continue serving his town and community in some government or public capacity.

"That's my hope, I was raised by two school teachers, I'm married to a school teacher, I I really do believe in public service," Seeley said. "Whatever is next on the horizon for me, I do hope it's a role where I am able to just impact the community. That can come through a variety of ways, the public sector, the not-for-profit sector, any host of ways."

Seeley said he was announcing his intentions now because of New York's recently revamped political calendar, which expedited the process for candidates getting on the ballot.

"I wanted to make sure that I was being upfront with the members of my party so that it would afford other people time to pursue the office if they wanted," he said.

It is with a heavy heart that I announce today I am not seeking re-election as @irondequoit_NY Supervisor.

Serving my beloved hometown, and its wonderful residents, has been the most rewarding experience of my life.

Seeley has worked in government nearly his entire life and has been an adviser to both Bello, now county executive, and Rep. Joe Morelle.

During his tenure in office, Seeley oversaw the rebuilding of the town's Public Works Department after its physical plant was destroyed by fire, managed the town's response to flooding along Lake Ontario, and helped orchestrate new uses for what had become perhaps the town's biggest blight — the moribund Medley Centre mall, which has been renamed Skyview on the Ridge.

"I can be proud of what we accomplished and what we're still accomplishing," Seeley said. "There was a time when Irondequoit was more synonymous with adversity and the dark cloud that kind of lingered over us."

"Now I think when people, especially on the outside looking, see Irondequoit they're reminded of the good things happening here and the progress we're making."