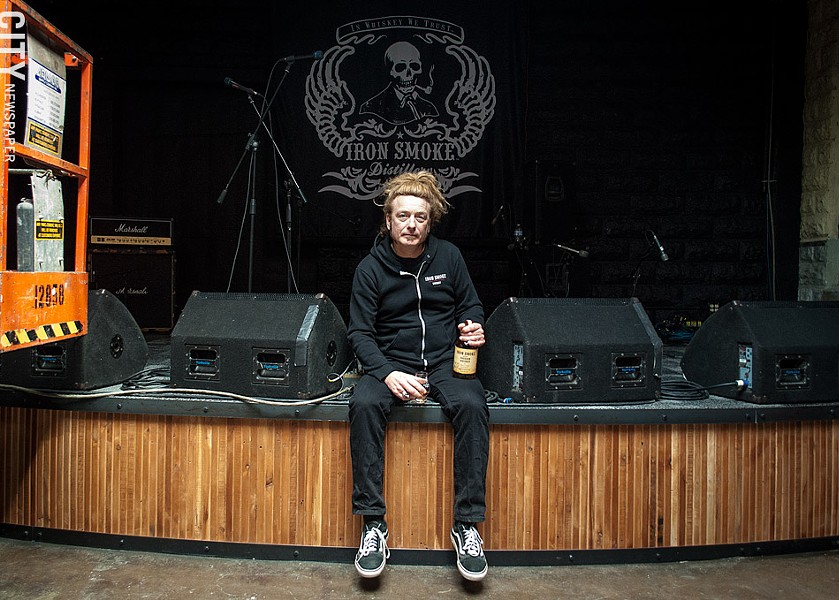 Rock and roll and whiskey were Tommy Brunett's lifestyle. Now they're his business.

With just a few shopping days remaining before Saturday's International Whiskey Day, Brunett and his co-conspirators in the Fairport-based Iron Smoke Distillery are preparing for a three-day celebration. The festivities will mark the opening of Iron Smoke Distillery's World Famous Spirit Factory, Watering Room and Side Show, a 4,000-square-foot tasting room, event space, and stage connected to the distillery space that Iron Smoke has occupied since 2014.

Iron Smoke Whiskey produces Iron Smoke Straight Bourbon Whiskey and Rattlesnake Rosie's Apple Pie Whiskey. It is one of the businesses making its home in what's known as the old American Can Factory at 111 Parce Avenue, off of Main Street in Fairport. Some portions of the rambling set of buildings date back to the Civil War, and were used in the manufacture of boots for Union soldiers.

Iron Smoke is riding the tsunami of craft distilleries and breweries that have opened not only in this area, but nationally over the past few years. From a modest start of six employees in 2012, by next month Iron Smoke Distillery will employ 30 people as it slowly expands, one state at a time. According to Brunett, Iron Smoke is currently available in seven states, with two more to be added this month.

"This came out of a backyard, now we're getting bootlegged on shelves in London," Brunett says. The distillery has won 56 awards — some for packaging, even — with a big honor coming from Jim Murray, the author of the popular annual "Whiskey Bible" guide.

"Out of 46,000 whiskeys and bourbons, we came out in the top six percent," Brunett says.

Friday's 5 to 8 p.m. grand opening will feature food trucks and a solo performance by Brunett, who first began playing out in the 1980's with Immaculate Mary, a rock band that knew how to market itself: It made national news by handing out condoms at shows and made the Guinness Book of World Records as the world's loudest band. Throughout the 90's and into the next decade, Brunett also led a band called Space Trucker, and even did a tour playing guitar with the English rockers Modern English. He now heads The Tommy Brunett Band, which has released one album and would probably have another one out if it weren't for the hold whiskey has taken on Brunett.

"I'm sure it took a year off my life," he says of Iron Smoke's move from the Finger Lakes to Fairport. "When they first heard we were interested in coming to town to open a distillery, they were carrying their torches."

But Fairport officials soon warmed to the idea, he says, and were supportive of the effort, which proved to be a complex and risky process. "We found out you have to build the distillery before you get the license," Brunett says.

The whiskey weekend also includes Saturday's noon to 10 p.m. World Whiskey Celebration, with food trucks, live radio broadcasts, and a special limited release of Master Distiller Drew Westcott's Single Barrel Bourbon Select. And on Sunday is the "Four Horsemen Resurrection," a 1 to 5 p.m. festival of bourbon, meat, and music. It's led by Brunett, Kevin McCann of McCann's Local Meats, and Josh Miles of The Revelry, with guest Horseman Zack Mikida of Bitter Honey. The Tommy Brunett Band and Pia Mata will play, and the $10 donation will benefit the Rochester Police Foundation and Friends of the Roc City Skatepark.

Related Three chords and the proof

Iron Smoke co-founders Brunett and Steve Brown's link to music was forged (literally) over the city's top indie-music venue. Brown, now a high-wealth management advisor, was one of the original owners of The Bug Jar, and lived in a third-floor apartment above the club. Brunett sometimes performed at the Bug Jar and recorded shows there for his syndicated radio concert series Universal Buzz, and lived in the apartment just below Brown.

Iron Smoke is obsessively local. "We're taking the high road and the hard road," Brunett says. It only uses ingredients harvested from within a 50-mile radius of the Finger Lakes, with the grains smoked on site. "Just a hint of smoke, a whisper," Brunett says. And the Watering Room will feature only New York spirits distilled from New York ingredients, as well as local beer.

Sustainability is also a key consideration. The stripped mash used in the distilling is returned to the farms to be used as livestock feed. Barrels made of American white oak have been used by local breweries such as Genesee and Three Heads to create whiskey barrel-tempered brews.

"We want the music to be special events," Brunett says. "We'll ask artists to play something different than they usually do, so it's not just another venue. It's about artist freedom. We create the space, we give them artistic license to do whatever they want."

The venue's room is spirits in all senses of the word. "Weird stuff happens here," Brunett says. "Maybe a chair moved. Or we just forgot someone put it there."

As the hundreds of washing machines and dryers that were being stored in the building were being removed, the work crews found items like an old pewter snuff spoon. Vents, pipes, and wood beams and ceiling rafters were left exposed. Period reproduction light fixtures were added, including a "gasolier" — a chandelier that operated on gas — although this one is on a 21st-century electrical grid. The room also features an impressive wood back bar and Victorian-influenced furniture.

And left behind is the building's large, riveted boiler. "It's part of the history of the building," Brunett says. "It's a work of art, if you look at it."

McCann was at a pre-opening event last weekend at the distillery, and noted how the Iron Smoke facility's look is a match for Brunett's guitar rock with deep American roots. "It's all so Tommy," he says. "A mix of the old and the new."

"How do you keep the spirit of the building?" Brunett muses. "Why would you want to erase the history?

"It's authentic, like us. In whiskey we trust. Trust is a giant word."

Jeff Spevak is a Rochester-based writer. His website is at jeffspevak.com.