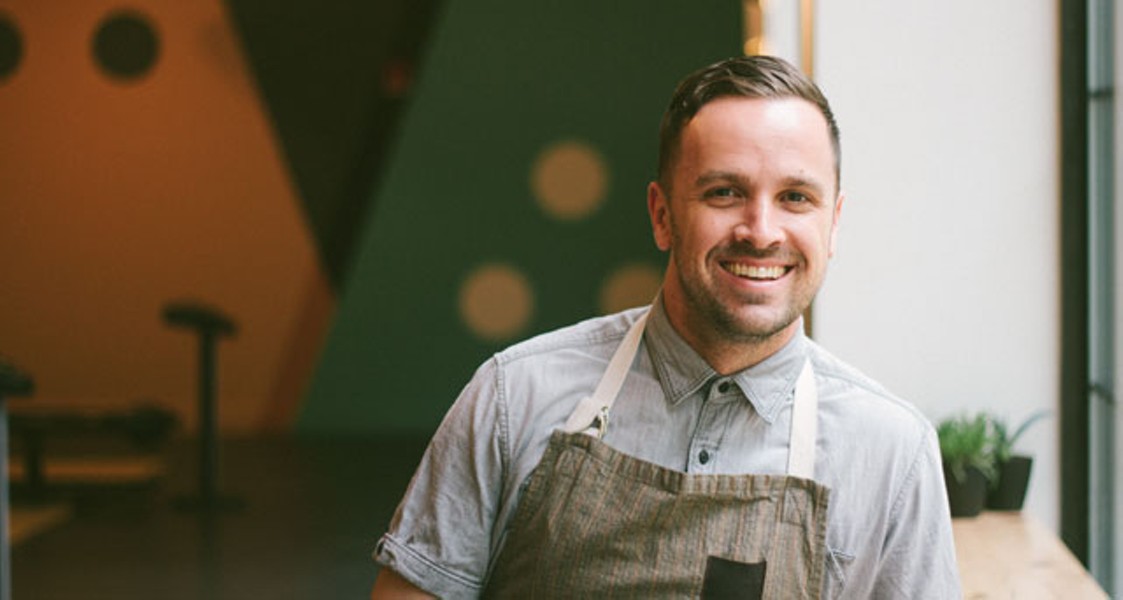 Radio Social is something different. The 42,000-square-foot space in the North Winton area was a former radio factory, and it now houses a new kind of social hub. Thirty-four bowling lanes; ping-pong, billiards, skee ball, and other games; furniture designed by Staach; a back lawn; and a full bar directed by Chuck Cerankosky — the co-owner of Good Luck and Cure, two of the best cocktail bars in Rochester. And then, a step further into unexpected territory, there's the 80-seat restaurant serving an Israeli-inspired menu created by Steven Eakins.

Eakins, a Fairport native, most recently worked for Marc Murphy's Benchmarc Restaurants in New York City, as executive chef for Ditch Plains, Landmarc, and Kingside. He also competed on the Food Network show "Chopped" in 2013. The 34-year-old was lured back to Rochester at the beginning of this year to become Radio Social's executive chef.

For the Israeli-influenced menu, Eakins says he found inspiration in the history of Radio Social owner Dan Morgenstern and his family. The Morgensterns came to the US from Israel in 1957, and Dan's father was hired as a mechanic — and then manager, a few years later — at Clover Lanes on Monroe Avenue. Dan purchased the Clover Lanes business in 2014 when the Monroe Avenue property was sold — Daniele Family Companies plans to build a Whole Foods at that spot. Radio Social is something of a rebirth for Clover Lanes.

CITY wanted to know more about Eakins' plans for his Radio Social menu, so we asked a few questions over coffee back in early April. An edited transcript of that conversation follows. CITY: How did you get involved with Radio Social? I'm sure that's a crucial part of you coming back to Rochester.

Steven Eakins: When I left, there was always an idea to make my way back at some point. It was just a matter of timing, feeling fulfilled going away and coming back with the right tools — mastering my craft, and being able to travel and enjoying myself while I was away. Living in New York City, it's not that far away. I've been able to make trips back quite often in the past five years, and was able to build relationships in the hospitality industry here and get to know the scene in general.

With that, I was able to build a relationship with Chuck Cerankosky, one of the owners of Good Luck and Cure. He's the food and beverage operator for Radio Social. A couple of years back, we did a pop-up night at Cure where we did dim sum and a dance party, and it packed the house. We had a good time. I always told him, "When there's an opportunity, let's talk." So when this came about, he brought it to me in the fall, and I signed on in January.

Through the process of understanding what the concept in general was going to be, and getting to know the Morgenstern family, and appreciating the history of their experience and their desire to evolve and create something that's unprecedented for the area and would bring so many different people together in one big place, that drove the idea that we didn't want to do something that was expected from a restaurant standpoint. We wanted to stand out.

We took a trip to Israel over last month, and that was obviously an inspiring trip from all points of view. But traveling there and eating the food reminded me a lot of what New American cuisine is: it's a crossroads or a melting pot of so many cultures. The idea of the Mediterranean, Middle Eastern flavor profiles fall hand-in-hand with what New American cooking is. Having the freedom to use a lot of different ingredients and techniques is something I'm really excited about.

We're going to do some things as far as different avenues, like we'll have the gaming experience, so we're going to have a snack-inspired menu that will have some things that you might have expected, whether it be chicken wings, but the flavor profiles will be completely different — not your average Buffalo chicken wing with blue cheese.

What are the mechanics of putting together this menu? You have this concept, then what happens?

Conceptually, I've been working on this really since the fall, engulfing myself in the flavors and the culture, educating myself on different parts of the Mediterranean. The trip to Israel was really fundamental in telling the story — and interacting with people while I was there. The Morgensterns, they were able to take me into one of their family members' home — it was an aunt of theirs — and we cooked all day long in her home. She lives in a Yemenite neighborhood right outside of Tel Aviv. So that day was fundamental in understanding dishes from start to finish. Now is the time we really start to get our hands dirty: we have a kitchen to work with, and I've started engulfing myself in the farms and the products that make up the Western New York area.

Are you working with a lot of local farms?

Absolutely. I want to have a focus on everything that we can possibly use locally and seasonally. Today, I met with Eat Me Ice Cream. We're going to be working with them, and all of the food hubs within the area — we're going to be keeping things as fresh and exciting and elevated as we can. So are any Morgenstern family recipes going to make it into the menu?

Absolutely. We're going to come from a genuine place. But we still want to have a modern, accessible, approachable style to what we're doing. Israeli, and Mediterranean cuisine in general, is pretty vegetable-forward, plant-based dishes, and then moving into meats and fishes that are roasted over coals. So there's still an American-style of eating, where you're starting the meal with appetizers and vegetables, and then moving into meat or seafood entrees — grilled meat and grilled fish.

Whenever you're bringing a non-American cuisine to American diners, how do you keep a balance to it all?

I think that falls hand-in-hand with the idea of coming back and engulfing myself in all of the farms in the area and the product and the ingredients that people are so familiar with. It could be something as simple as local tomatoes in the summer, that everyone knows — instead of dressing them with black pepper, maybe it's a red chili from Turkey or a sumac from Israel, which adds a little brightness and acidity to the tomato. So using a sense of ingredients that are very familiar and seasonal and local so that people have a strong awareness of these things, but mixing in the flavor profiles that we're working with on the way.

In the back of your mind do you have to say, "OK maybe this dish will actually turn people off"?

You said you were inspired by the Morgenstern family's history. What is it about them or about Israeli cuisine that clicked?

Dan and his family are trying to do amazing things for the city in general, from many different points of view. So being a part of that was a natural no-brainer for me. Chuck made it much easier. I'm just blessed by the opportunity.