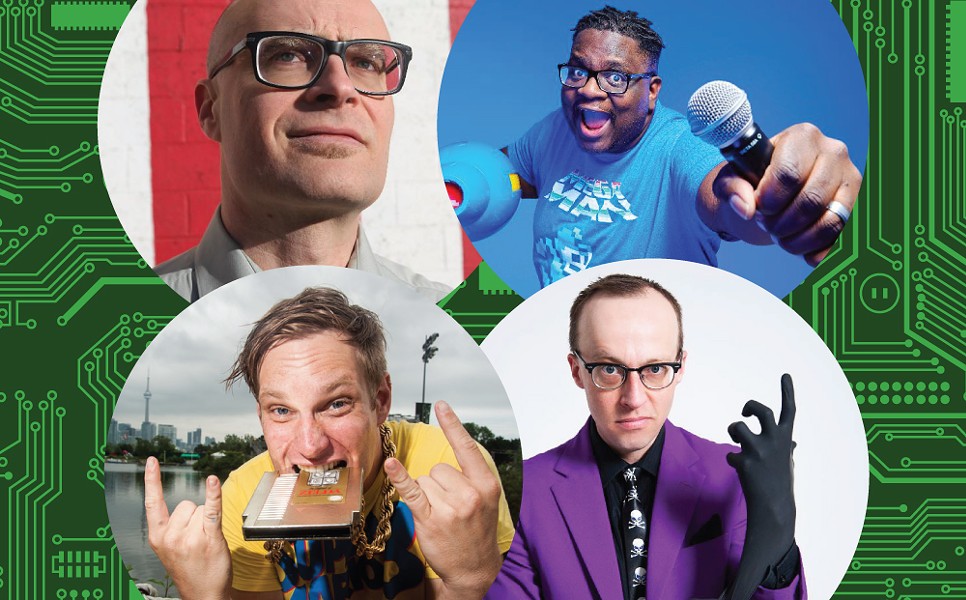 Nerdcore hip-hop is a niche genre. While mainstream hip-hop channels my inner alpha dog, nerdcore makes me want to collect action figures at the library. It’s the musical equivalent of “Napoleon Dynamite” — not necessarily the coolest kid in school, but an endearing one, with a group of devoted supporters.

Since 2017, nerdcore’s biggest names have toured together, rocking club stages from coast to coast and beyond. The lineup spills out like a fantasy squad of brainy emcees, uniting the godfather MC Frontalot, the graduate MC Lars, the gamer Mega Ran, and the goblin Schäffer the Darklord.

All four rappers were down for a conversation via email, in advance of bringing the Mount Nerdcore tour to Rochester. An edited version of that interview follows.

CITY: Who is the funniest guy on this tour?

MC Lars: Probably Mark [Schäffer], because he doesn’t talk too much, and everything he says is gold.

MC Frontalot: Schäffer has the quickest wit of the crew. But it's his slow burns that get me. I still think about him in the back seat, saying, "Mom! Hey, Mom. Mom, guess what? Guess, what, Mom," over and over for five minutes. I finally got annoyed and turned around and said, "What, Mark?" And then he did the perfect five-year-old's smile and said "I'm Batman."

Any plans to form a nerdcore supergroup?

Mega Ran: We kind of have, with us doing this tour yearly. It's done a lot to bring our fan bases together. We all guest on each other's tunes.

Schäffer the Darklord: In addition to being a part of the Mount Nerdcore Tour, I am also a founding member of The Department of Darkness, a collaborative project with nerdcore producer Vince Vandal and a host of nerdcore emcees, including all of my tour mates.

MC Frontalot: I wonder if the four of us teaming up can somehow transcend the traditional supergroup, and we can call ourselves an ultragroup. Or a mega-hyperteam.

Describe Nerdcore as if you were writing a haiku or a personal ad.

MC Lars: Are you making rap? / Long after our subgenre / Was still relevant?

How have you shaped this genre?

MC Lars: I never considered myself “nerdcore,” but when I met Frontalot, I realized it fit into a mold of stuff like he and MC Chris were doing. The term was actually coined by Nerf Herder, but we need to give Frontalot props for coining “nerdcore hip-hop” and bringing the nerdy rappers together in 2006. My contribution was sampling emo and punk bands and doing a lot of literary raps, including a lit-hop album with Mega Ran.

MC Frontalot: I've done a number of shows with the Nerf Herder guys and they never mentioned that. More power to them. When I came up with “nerdcore” in early 2000, I googled it and could only find a blog about jumping into hedges. So I will continue claiming that term until Parry Gripp texts me and tells me to stop.

Mega Ran: I think my contribution has been one of the view of the “nerd” from a kid who grew up learning how things ticked, then getting into video games, comics, anime and more, and continuing to make that a large part of your adult life.

Schäffer the Darklord: I released a concept album in 2013 that eschewed pop culture references for a candid exploration of my experiences in therapy. I don't think this shaped the genre; I just wanted you to know that I did that.

Why do you make music?

MC Frontalot: I always loved music, but my interest in making any myself grew out of the tech. I loved my four-track until the late 90’s, and then I loved that my computer suddenly had a high-res recording studio in it. My passion was fueled by wanting to make things that sounded more and more like professional studio recordings, at home, by myself, for free.

MC Lars: It’s something I couldn’t help doing. It was a hobby I was fortunate enough to monetize right out of college. My life would be very different if I hadn’t started rapping, I’d probably have money and a house and a graduate degree or two, but no Beavis & Butt-head parody shirts for sale in small, dark clubs.

Mega Ran: It's cheaper than therapy, most times.

What’s the weirdest thing that influences your music?

MC Lars: Gravity. Without it, I would have trouble dropping the rhymes. They’d float up.

Mega Ran: These days, the news.

Where is the most unusual place a song of yours has been played?

MC Lars: My anti-Hot Topic song was often played in Hot Topics 13 years ago. They wanted to show that they were edgy and in on the joke.

Schäffer the Darklord: A sex party.

Which song should everyone hear?

MC Frontalot: Dr. Awkward's "Joystick" is an excellent ode to the intersection of gaming obsession and sex misery.

Years from now, how will they remember you?

Mega Ran: Hopefully as a guy who did what he loved, his own way, and was moderately decent at it. Maybe as a footnote and brief mention when the first nerdy rapper wins a Grammy, 50 years from now.