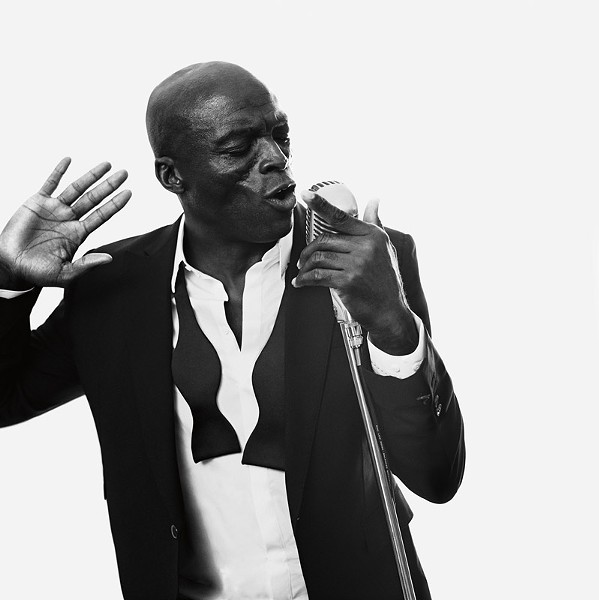 There is a certain amount of class and caution that's required when an artist takes on standards. Not only are people hearing the interpretation, they also hear the original version dancing in their head. It's a precarious position for an artist to be in: somewhere between honoring a tune's legacy and putting just the right amount of personal spin on it.

Soul singer Seal's latest album, "Standards," released last year, is a study in reserve and elegance. Songs like Johnny Mercer's "Autumn Leaves," Cole Porter's "Love For Sale," and Screamin' Jay Hawkins' "I Put a Spell on You" get Seal's referential and reverential twist without traveling too far outside the original goalposts.

Maybe most widely known for his international hit "Kiss from a Rose," Seal has won three Brit Awards and four Grammy Awards. You put this man's sandy, soulful croon over this fine selection of songs found on "Standards" and they'll be swooning in the aisles.

CITY chatted with Seal about learning and unlearning songs, no longer putting out albums, and what's on the horizon. An edited transcript follows.

CITY: What made you want to record an album of standards?

Seal: It's a genre of music that I've always had a great deal of admiration and appreciation for because they are simply great songs. The reason I became a musician in the first place is that I just loved great songs and I loved the impact that great songs could have on people emotionally.

When recording this album, how did you make the songs your own?

What was the hardest song to do?

"It Was a Very Good Year," because it had the strongest narrative and those songs are all about narrative.

You told Billboard Magazine you probably won't release any more albums, stating the concept is no longer relevant. What will you do instead for those who love and want to hear your music still?

Oh, I'll make albums, I'll always be an album recording artist, but to make albums as a means of surviving and getting my music out there is not necessarily the most effective way to do it.

There's no reason why it can't go back to how the 50's were and just keep putting great music out. So, I will be putting out EPs and songs and music — there will be plenty of music coming from me, don't get me wrong. It will just be really good music and it won't necessarily be in the way of an album. I've always been focused on quality over quantity, so whatever I put out will have a level of integrity, and it won't be just so I can quickly put an album out in order to stay relevant. I have no interest in that.

What is your earliest musical memory?

Singing "I Can See Clearly Now" on stage when I was 11.

When did you realize you could really sing?

When I was 11, and my teacher whom I idolized put me on stage in front of parents and teachers at the PTA ceremony.

Will you do another standards album?

I never say never. I love doing a standards album because it's discipline — it's much harder than my own material. Because there I have songs which are bigger than me, which are iconic, which I have to uphold and respect and approach with a level of discipline and integrity that is at the highest level. And so I will never say never, but that's not on my agenda right now. What's on my agenda right now is my own music, which in fact the standards album inspired.

What are you listening to now?

Compromise. I will never compromise my integrity as an artist, ever. Ever.

What's on your immediate horizon?