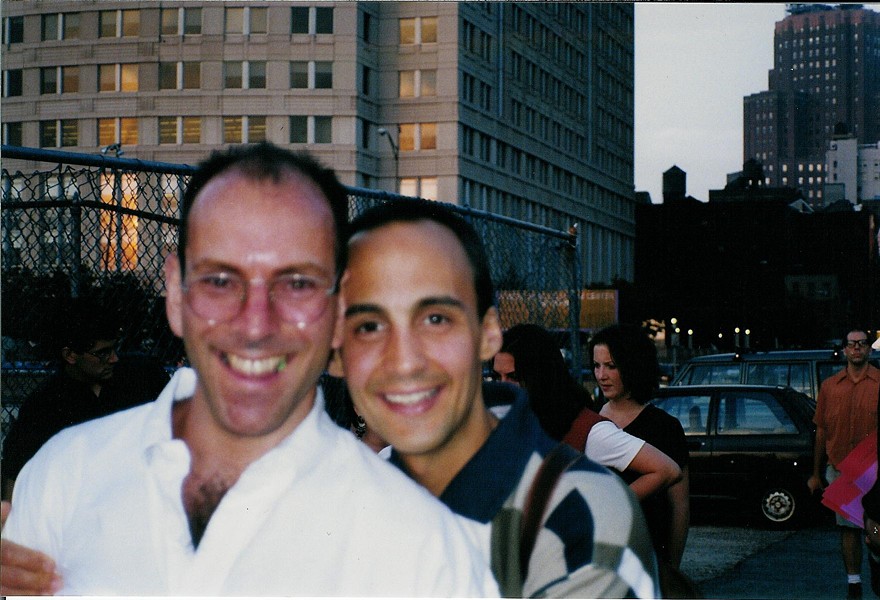 'The Tibetan Book of the Dead'

Composer Ricky Ian Gordon's opera-oratorio "The Tibetan Book of the Dead" had its world premiere at Houston Grand Opera in May 1996. A literal interpretation of the Buddhist text of the same name, with libretto by Jean-Claude Van Itallie, the composition process was intensely personal for Gordon. Written for the composer's partner Jeffrey Michael Grossi as he was dying of AIDS, "The Tibetan Book of the Dead" became the means through which Gordon and Grossi came to terms with death.

The piece is the enduring legacy of that journey, and now - more than 20 years later - it's being revived by Eastman Opera Theatre, in a production staged by EOT's director Steven Daigle, with music direction by Timothy Long. The opera features alternating casts and runs from November 1 through 4 at Kilbourn Hall. Gordon recently spoke over the phone about revisiting the harrowing times in which "The Tibetan Book of the Dead" was written and what has changed for him since then.

CITY: How did this collaboration with Eastman Opera Theatre come to be?

Ricky Ian Gordon: The director Steven Daigle ended up calling me and saying, "We'd love to do 'Tibetan Book of the Dead,'" and I loved the idea because it hasn't been done since its premiere in 1996, because it was written under very unusual and painful circumstances. So I sort of put the piece away for a long time. And it was sort of good timing. I was ready to look at it again, and deal with it again.

In working on the opera again, you must have returned to what the writing process was like. Was it important to separate the personal feelings you were having about the loss of your partner and the larger message of the work? Or are they inextricably linked?

Now I see it as more connected to the world, more connected to subject matter, more connected to the people performing it, and to the content of the piece, to what it says. At the time it was very inextricably linked, and it was written in sort of a fever, and quickly. It was practically in competition with Jeffrey staying alive. I mean, he died like two months after the premiere. So it had to be written, it had to exist, and it had to help him. But now it's just a piece in the world, and it's actually very sort of pleasant to revisit it and to see what I had done - just to see what you did in such a sort of emergency situation.

It sounds like you wrote this piece out of absolute necessity, emotionally, perhaps not only for your well-being but for your partner's well-being as well. Maybe as a sense of closure?

It's not closure. I had to write the opera for Houston. I needed the money, and they wanted me to write an opera. The artistic director, David Gockley, saw what I was reading, which was "The Tibetan Book of Living and Dying," and I told him, "I'm trying to learn the teachings because Jeffrey wants to die as a Buddhist." He said, "Why don't you make an opera out of that?" And that suddenly felt like an incredible way to sort of include what was happening to me, that not only would I be learning the teachings, but I would be setting them to music so Jeffrey's entire life would be inundated with them, you know? It was like the teachings became our life at that point.

The second section of the piece is called "The Moment of Death," and it's after the person who's dying has died, and a sort of angelic character sings, "My friend, now is the moment of death. The time has come for you to start out. You are going home." And it was literally the aria. Jeffrey wanted to hear it when he died, and we had like a recorder set up so that if at the moment he was dying, we could get to it and turn it on, that would be what he was listening to. But the moment he died, he was sitting on me, and there was no way to go to the stereo, so I just sang it to him myself.

I can't think of a more thorough integration of art and spiritual teaching into one's life. It's such a confluence of these different facets of your life.

It's unlike anything that's ever happened to me. It was so surreal, you know what I mean? To have been away from that piece for so long and that period, and to go back to Rochester, it was like the minute they started, it really conjured up Jeffrey. But it didn't necessarily conjure up the unbearable pain of that time. It conjured up the sort of fever of creativity in the atmosphere of enormous need.

Has your perspective on death and the grieving process changed since you wrote the opera?

It was a very traumatic time for me, but most of the comfort I was given was, Jeffrey showed me in a million ways after he died that he wasn't gone. And it's the first time I really had my only experience of "We don't die. I don't know what happens, it's a mystery, but it's clear to me that we don't just end." It was as if someone was constantly showing me, from the world behind the world, that he was still here.