December 17, 2018
While nearly 100 people attended the December 14 meeting on arts funding, for the most part, people of color stayed away. One was Reenah Golden, owner of The Avenue Blackbox Theatre on Joseph Avenue.

Before the meeting, she had posted information online, to expand the arts audience notified about the meeting. But Golden herself didn’t go.

“For me the question becomes, what is the agenda?” she said in an interview the day after the meeting. “That agenda and how it’s set needs a lot of work still in this city. I’m not interested in PR stunts and damage control, but I am very interested in working toward positive change for our city. I’m not always comfortable with the idea that the fix is that simple.”

One of the big questions that many are asking, Golden said, “is why do the cultural demographics of the city matter so little in these discussions of allocations of funding, especially in the arts, but definitely across industries?” 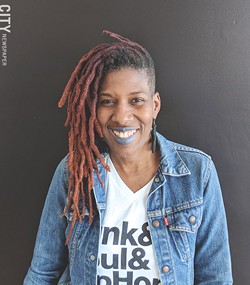 “There’s a lot of inequity,” Golden said, a lot of barriers that keep small grassroots arts organizations and artists of color from even accessing funding. “And yet,” she said, “even though these folks are often under-resourced,” they are still huge contributors to Rochester’s creative capital, a fact she says “rarely enters the studies, heat maps, and data charts.”

In addition to owning and running The Avenue, Golden 20 years ago founded the arts and education business Kuumba Consultants, which provides arts services in schools and after-school programs. Through her work, she said, she’s noticed that a big concern with how funding distribution is decided, is that it does not often reflect the cultural demographics of the city.

The fact that some artists and arts leaders decided not to attend the meeting doesn’t mean they aren’t having funding discussions and working together to create funding opportunities for one another, Golden said. Work is being done all over the city, and officials and decision-makers should “step back and say: ‘Am I at the right table,’ not ‘Who else needs to come to my table.’”

It’s not that she isn’t interested in working with City Hall or anyone else, Golden said, “if we have common goals and folks are open to looking at some other methodology in terms of solutions. I’m a collaborator.”

Golden said she doesn’t have the solution for making Rochester’s arts funding more equitable. “I don’t know if the solution is a 1 percent tax,” she said, “but I do know that taxation without representation is never good. As a taxpayer in this city and county, I know that more people need to be able to weigh in on what these solutions should look like.”

There are elements that the arts funding discussion doesn’t take into account, “like compensation for the artists with the least amount of resources, and improving the livelihood of under-resourced artists who are residents of this city and county,” she said.

“That includes barriers to things like housing for artists of color and other marginalized groups,” she said. “As we talk about ourselves as a ‘city of the arts,’ we need to actually think about the people who make the arts and how we can make the city more conducive to them being able to create in it.”

Participation in art shouldn’t be treated as a luxury, Golden said. “How do we continue to contribute our creative capital here in this city, and make it a robust city of the arts, if our needs – basic and otherwise – aren’t being met? How do we think outside of just those areas where people are already okay? How are we making sure that those who are not doing okay here in this city are still able to contribute to the arts?”

“I also serve an audience that can’t help me pay the theater’s bills because they’re struggling to pay their own,” Golden said. “My neighborhood volunteers and contributing artists don’t make enough money to volunteer any hours, yet they are there dedicated to building this place with me.”

“Raising your own salary alone in a space like this while serving a community in need shapes your idea of what are the most critical funding areas,” Golden said. “When you’re organizing studies or making decisions while collecting a livable salary, you miss these important pieces to the puzzle.”