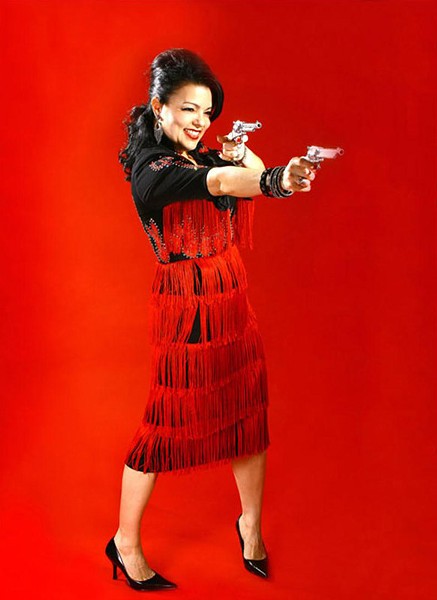 There's a spot in certain female voices — a transitional spot, if you will — between sweet vibrato and growl. Texas rockabilly songstress Marti Brom traverses this vocal twilight beautifully, leaving a slew of broken hearts in her wake. Brom's voice and overall persona is classic and way beyond your typical rootsy twang and tribute. Marti Brom is the genuine article, and rockabilly royalty.

Most artists list a moment, an event, or artist responsible for opening their ears to music. But for Brom, it just always was that way.

Born in St. Louis in 1962, Brom grew up listening to singers like Petula Clark and Dusty Springfield. But it was when she heard Patsy Cline, and then the rocking Janis Martin, that she knew she was onto something.

I collected records," she says. "And I always liked older music. I started off singing more country stuff — you know, Patsy Cline, Brenda Lee. I was also into New Wave music. But my sound still gravitated toward older stuff."

In 1990 Brom and her family moved to Austin, Texas, where Brom, now cured of her stage fright, fell in with the burgeoning rockabilly scene. She initially sat in with cats like High Noon's Shaun Young and Kevin Smith (who incidentally will be performing at this year's XRIJF as bassist in Willie Nelson's band) and Todd Wolfmeyer. She rapidly grew a following inspired by her femme-fatale purr, hillbilly hiccup boogie, and out-and-out wail. But she also pushed the limits of the tradition. Artists like Suzi Quatro, Blondie, and The Pretenders still lit her fuse as well.

"I covered a song Ray Davies wrote, 'I Go To Sleep,' that The Pretenders covered. Luckily I had Nick Curran and Lisa Pankratz in the band at the time so nobody looked at me weird," Brom says.

No, they actually look at her adoringly from all corners of the world. Brom has followings in Europe, Australia, Scandinavia, and Japan. Brom has recently put out two singles. One is a duet with Boston blues-shouting madman Barrence Whitfield, and the other is a tribute she recorded for Martin. These will go on the pile of releases that stand six CDs high.

But you've really got to dig this rockabilly filly live. Thousands of Marti Brom fans can't be wrong.

"There's always been a huge following," she says. "Especially in Finland, where my record label [Goofin' Records] is. It's nice, because I get to travel all over the world and play music." This touring has included sharing the stage with legends like Ronnie Dawson and Rosie Flores, and memorable moments like the night her hero Janis Martin was in the audience.

"There she was," Brom says. "Front and center. I was so thrilled."