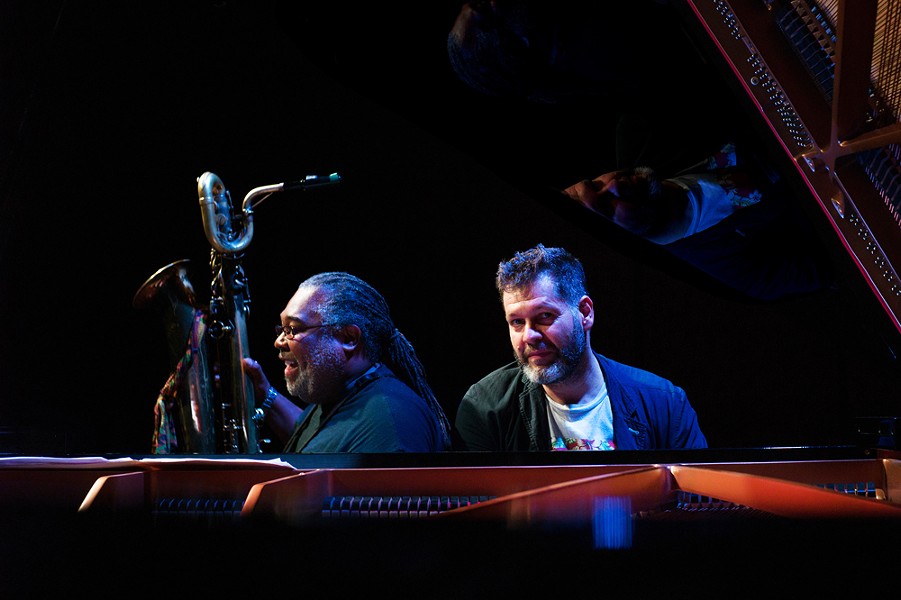 Every year at the end of June, Rochester jazz fans can head downtown to the Lutheran Church or Christ Church to hear some of the world’s most adventurous music. But the jazz festival lasts only nine days. For the rest of the year, only one local destination has consistently offered encounters with the avant-garde: Bop Shop Records.

Next week the record store and concert venue hosts a prime example of the experimental when pianist Lucian Ban and baritone saxophonist Alex Harding come to Rochester on October 8. Ban is from the Transylvania region of Romania; Harding grew up in Detroit. Their diverse influences converge beautifully on their new album, “Dark Blue,” and they’ll be bringing some of that music and more to Bop Shop Tuesday evening.

We recently spoke to the two musicians in a conference call. The following is an edited version of our conversation.

CITY: What factors in both of your pasts brought you to this music?

Lucian Ban: I discovered jazz and piano at the same time in the mid-80’s by listening to the South African pianist Dollar Brand, now known as Abdullah Ibrahim. Immediately, I met a pianist in my hometown who knew a lot about jazz and had a tremendous collection of LP’s. He got me into Monk, Bud Powell, and the whole canon.

The best-known musician from Romania is Béla Bartók. Did he have any impact?

Ban: I am doing a multi-year project on Bartók. He was born 250 miles away from my hometown. He collected over 3,000 folk songs from the area and recorded them on wax cylinders. I am now re-imagining these folk tunes from 100 years ago.

Alex, how did you begin on bari sax?

Harding: I started on drums. I had doting parents. I showed interest in music in elementary school; the next Christmas I had a drum set. I played drums for two years and then I heard Grover Washington Jr.’s “Mr. Magic.” I said, “Wow, what is that?” The following Christmas I had a saxophone.

In ninth grade, I was playing tenor. Tenth grade, I was ready to go, but James Carter shows up at my high school and he’s a tenor player, so my band director switched me to baritone. I hated it. But after I while I thought, wow, this horn is kind of nice.

What attracts you musically to each other?

Harding: This is black music. When I first met Lucian, he was very curious about it. So, I was doing what I was told to do — share it.

Ban: There are a lot of saxophone players, but there’s only one baritone player like Alex, so deeply rooted in raw blues. From Alex, I got an insight into the blues that I never grasped before. This music, regardless of the genre, it’s really coming out of blues expression, and Alex really has that down. I still marvel at it.

How do you handle improvising whole tunes? Do you ever throw each other off?

Harding: We discuss a little bit, but not much. We open it up and see where it goes. There’s always some magic in what’s happening, because if it ain’t living and moving, it’s dying.

Ban: There are strategies in how you build this music, and we’ve both developed them over the years. The first note is very important. How you play it speaks a universe about it. Some people misunderstand playing free and playing completely improvised. There’s a whole tradition, from playing intense to playing more spacey. Each note is important so the way you start contains almost everything.

If Alex starts very intense, very low, raspy, or whispery, it already sets a mood that I have to react to. So the fact that we’ve been playing so long with each other and with some masters contributes to our strategies.

Which of those masters made an impression on you?

Harding: Hamiet Bluiett and the members of the World Saxophone Quartet: Julius Hemphill, Oliver Lake, David Murray. I saw the possibilities of what four creative guys could do, where they could go. It was wonderful.

Ban: I had the honor of working for 10 years with the great Mat Maneri. He’s one of the masters of improvisation. I worked with great drummers like Nasheet Waits and Eric McPherson. When Alex and I were playing with Bob Stewart and the great drummer Willard Dyson, many times I wanted to stop playing and just hear this amazing way of playing this music.

Your music now is a long way from Grover Washington Jr. What’s the state of jazz today?

Harding: That was a gateway into me exploring who I was. I grew up hearing Muddy Waters, John Lee Hooker.

My father loved Jimmy Smith. My mom loved Aretha and the James Cleveland Choir. All of this music was my foundation.

I’m always playing the blues. One thing people don’t realize about Lester [Bowie] and AACM and all the people I grew up admiring: it’s all the blues.

Ban: Even though the album is not Grover Washington, there’s a ballad, “Chakra,” where you can hear Alex loving Grover Washington. I’m going on the road soon with an opera with two singers, but I’m still Lucian Ban. The goal is to put my stamp on it. What touches us stays with us for the rest of our lives. Abdullah Ibrahim — I still channel some of that through me.

The music is very much alive and tremendously creative. I live in New York. I go out and listen. It’s happening. I would say as long as cats maintain a lineage and a knowledge of the music that was done before them, the music is in healthy shape.