Interview: Local performer Evan Harrington returns to Rochester in "Once"

Evan Harrington can probably count on a round of applause whenever he takes the Auditorium Theatre stage this week, as a member of the touring company of the hit Broadway musical "Once." Harrington is returning home, one of many ambitious young people who got the opportunity to perform in school and in local theater groups in Rochester, and moved on to bigger things.

In Harrington's case, the big things have been replacement parts in three long-running Broadway hits. But his current job is probably his biggest yet: a meaty supporting role in the first national tour of another Broadway hit, a role that requires him to sing, act, dance, and even play the ukulele.

Like many other actors, Harrington got the acting bug while in high school; his first role was in a West Irondequoit High School production of "The Music Man." His teacher Todd Lilly encouraged to him continue with music and acting studies, and he played bigger and bigger parts, as well as taking part in performances outside school in the Monroe County Shakespeare Festival and in Buffalo's West Seneca Youth Theatre.

Harrington had a good example to follow. His father, Ken Harrington, has been a versatile leading man in local musical-theater productions for many years; his recent roles include "Zorbà" for Blackfriars, Daddy Warbucks in "Annie," and Captain Von Trapp in "The Sound of Music" for Pittsford Musicals. Next he'll play Max in Blackfriars' upcoming "Sunset Boulevard." 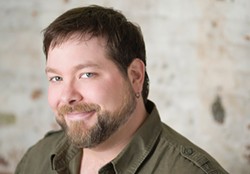 "So when I got a little older and decided that maybe being a professional lacrosse player wasn't for me, I had plenty of encouragement and support for going into musical theater," says Evan Harrington. After his high-school graduation in 1994, he did exactly that at SUNY Fredonia, where he received a degree in musical theater — and then had to decide which step to take next. He decided to take a year-long apprenticeship at Philadelphia's Walnut Street Theatre, the oldest continuously running professional theater in the United States. He calls that period his "training wheels."

"Working in the theater requires talent, of course," he says, "but it also requires lots of work and lots of luck. And your progress in the business is always tied to who you've met."

When Harrington's year in Philadelphia was up and he was wondering where to go next, he got a lucky break. "Eight of us graduated together from Fredonia with musical-theater degrees," he says, "and one went to New York immediately. When my time in Philadelphia was over, I called my friend in New York, and it turned out his roommate was leaving and he needed a new one." Harrington moved to New York in January 1999, and has made it his base for the past 15 years.

"When people ask me what my first job in New York was, I tell them Virgil's Barbecue — for six years," says Harrington. At this point his story matches that of hundreds of other aspiring actors: talented young guy in the competitive world of New York theater, waiting tables to pay the bills and spending his spare time taking classes and auditioning, auditioning, auditioning.

The auditioning paid off a few years later, with national tours of "The Music Man," "Camelot," and other shows. This created a schedule of eight months of touring, several months off for auditions and other work, then eight more months of touring, etc. It was non-union work, but Harrington gradually built up a resume. (He has also had small roles in a couple of movies, and what he calls a "blink and you'll miss it" role in an episode of "30 Rock" — no "Law & Order" appearances, though.)

Harrington's close-up opportunity arrived in 2008, when he was chosen as a replacement in the role of Brian in the long-running musical "Avenue Q" (the one with the dirty-mouthed, if hilarious, puppets). Since then, he has seldom been off the stage. Harrington's Broadway resume is brief but choice: besides "Avenue Q", it includes a long run in "The Phantom of the Opera" as Piangi, and a stint as Alf the pirate in the play "Peter and the Starcatcher" (a prequel to "Peter Pan"), all long-running award-winners.

"When I think of the shows I've done on Broadway," says Harrington, "I realize how lucky I've been. Three shows and three Tony Award winners, including two Best Musicals."

Harrington's current project is also a multiple award-winner, based on a popular recent movie. After it opened on Broadway in 2012, "Once" won eight Tony Awards (among lots of others), and is still running strong. The show's pedigree also includes an Oscar for Best Song, for the original film (the tune "Falling Slowly"), and a Grammy. It is definitely a high-profile project and a beloved show, and Harrington is excited to be part of its first national tour. 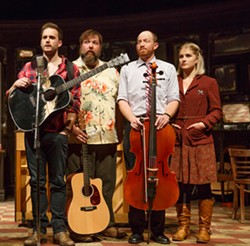 He plays Billy, a music-shop owner who brings together the show's romantic leads (simply named Guy and Girl) together, even though he has feelings for the Girl himself. "Billy really has a crush on the Girl," says Harrington. "He's a passionate character. He plays music with her and wants to take care of her, but the Guy throws a monkey wrench into those plans."

Music is indeed a large part of the characters' lives. The Guy is a songwriter, and most of the major characters in the show are musicians. In fact, director John Tiffany's conception of the show requires all of the characters to sing, dance, and play instruments, often all at once. Harrington is called on to play guitar, mandolin, and ukulele, while negotiating some fancy footwork.

"It sounded impossible to me," says Harrington, "But after a couple of weeks of hard rehearsals I found I could move around and play music. There are some great musicians in this show, and I am getting a lot of free lessons. And I'd always wanted to play the ukulele!"

The "Once" tour is a long one, covering 29 cities in the United States and Canada. It opened in Providence on October 1, 2013, and winds up on October 1 of this year in Charlotte, North Carolina. After his experiences on non-union tours early in his career, Harrington is enjoying the relative luxury of a high-end national tour. But he is most excited about returning to audiences in his hometown. In fact, this is his first performance in Rochester since he left in for college in 1994.

Besides seeing family and friends, he'll do some giving back while he is here. He'll revisit West Irondequoit High School to meet with students and hold a master class, as well as other classes at high schools here and in Buffalo, the next stop on the tour.

A big, friendly, bearded man, Harrington is a natural for what he calls the "funny guy roles" — like the three he has played on Broadway, which range from a would-be comedian to an egotistical opera singer to a wacky pirate. (A visit to his website will confirm that he has the vocal chops not only to play an operatic tenor convincingly, but also to sing Meat Loaf and Paul Simon.)

It's not the kind of character you can play forever, though, and "Once" gives him a chance to show what he can do in a more serious role. And Evan Harrington definitely has serious roles in mind for his future. When asked about his dream musical-theater roles, he goes right to the top: he'd love to play Jean Valjean in "Les Misérables," musical theater's saintliest character, but he'd also like to try Sweeney Todd — probably its most devilish. Until then, there are many other roles to explore, or perhaps create.

"I think the life of every actor is about the same," he says. "Often things are tough and nothing seems to be coming your way. But when things are going good, well, you're living the dream. All told, I know I have been a very lucky actor."