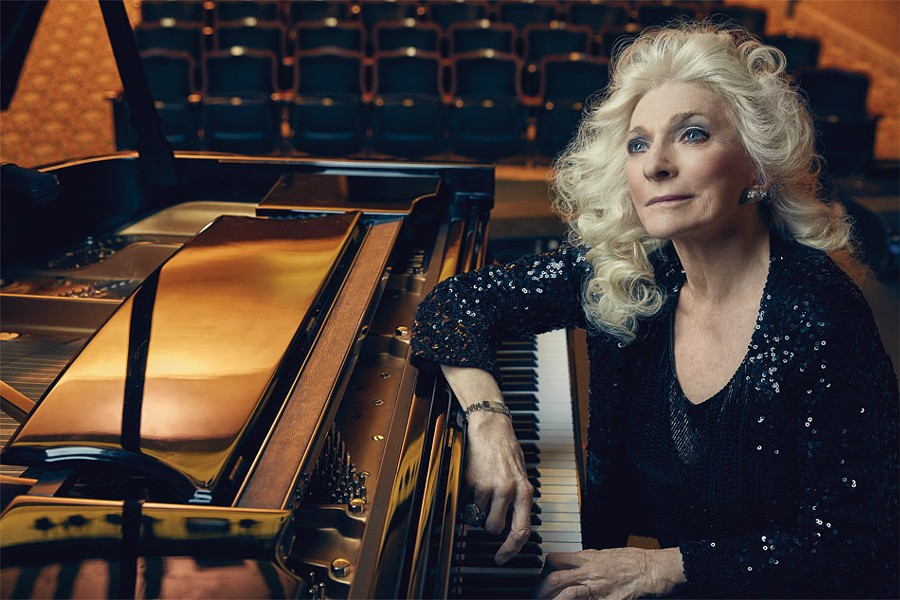 When you phone Judy Collins, if you’re lucky she will not answer.

“Hi, this is Judy,” a voice will say, and then sing: “I’ll be seeing you in all the old familiar places...”

Then: “Leave your name and number and I’ll call you back.”

It’s that unmistakable soprano voice, still gorgeous after all these years.

Collins released her first album in 1961. By the late 1960’s she was a ubiquitous radio presence with songs like Joni Mitchell’s “Both Sides Now,” The Beatles' “In My Life” and Leonard Cohen’s “Suzanne.” Fans who attend her Golden Link Folk Singing Society concert at Hochstein Performance Hall Saturday will hear that she’s still going strong with her latest, timely, a cappella song, “Dreamers.”

Collins did call back, and the following is an edited version of our conversation.

CITY: In your early years you were a concert pianist. What made you turn to folk music?

Judy Collins: After playing the piano, playing with symphonies and learning all the songs of Rodgers and Hart, singing with choirs and choruses and singing with my own group, at 15 I was struck by two folk songs: “Barbara Allen” and “The Gypsy Rover.” That was it. I knew that was the kind of music I had to do.

In the 1960’s and throughout your career, you had an ear for great songwriters: Eric Anderson, Phil Ochs, Gordon Lightfoot. You introduced the world to Joni Mitchell and Leonard Cohen.

I was very lucky because I didn’t write my own songs. The first couple of albums I did traditional songs, but when I moved to Greenwich Village, it was time to do the songs of the singer-songwriters who were swarming around me.

I learned to how to pick a song from my father, who had a radio show for 30 years, and played and sang beautifully all the songs of the Great American Songbook. So I knew what to listen for in a great song. It was probably in my DNA.

When did you first hear “Both Sides Now”?

Oh my god, I heard it on the telephone in the middle of the night in the spring of 1967. Joni Mitchell had been hanging out at a club with Al Kooper and Blood, Sweat & Tears. He knew what I did with other people’s songs. He said, "We’re going to call Judy right now, you’re going to sing her that song, and she’s going to record it."

How did you discover Leonard Cohen?

We had a mutual friend who talked to me about Leonard when he was writing obscure poetry. One day she called and said, “Guess what? He’s writing songs. He wants to come and see you.” In 1966 he came to my door. He sang me “Suzanne,” “Dress Rehearsal Rag,” and “The Stranger Song,” and that was it.

What made you do the interspecies collaboration, “Farewell to Tarwathie”?

I was acting that summer in the Delacorte Theatre, “Peer Gynt” with Stacy Keach. One night a man came backstage after the show. He said, “You don’t know me, but I’ve got this tape. I just recorded the humpback whales in Bermuda. It has never been recorded before. I want you to take it home and listen to it and figure out what to do with it.”

I’d listened to a lot of sea shanties. I was engrossed with English, Irish and Scottish whaling songs, so I knew “Farewell to Tarwathie,” and when I heard the whales singing I thought, that will be a perfect match.”

I know you’ve recently been touring with Stephen Stills, but what was it like in 1969 to have “Suite: Judy Blue Eyes,” his song about you, all over the radio?

I couldn’t get away from it. It was perpetual Stephen Stills all the time. We remained friends after our affair. We had a good friendship to the point where we, somewhat nervously on both of our parts, decided to do some shows together. We ended up doing 115 shows over the past year and a half.

On your 1968 album, “Who Knows Where the Time Goes,” you showed that you also could write, with songs like “My Father.”

Thank you. I’m very proud of my writing. I was encouraged to write by Leonard Cohen. He encouraged me to write my own songs, and I encouraged him to sing his own songs, so we did each other big favors.

In 1975, what made you record Stephen Sondheim’s “Send in the Clowns”?

An old friend of Leonard’s found it. She said, “You have to do this.” I put the needle on the cut and I immediately called [Broadway producer] Hal Prince and said, “This is an amazing song.” He said, “Yes it is, and about 200 people have already recorded it.” I said, “Who cares?”

There are few artists who began in the 1960’s and are still recording today. Why do you think you’ve endured?

I had a great teacher. In 1965, I was on the road and losing my voice all the time.  I called this teacher and he asked, “What kind of music do you sing?” I told him and he said, “I’m not interested. You people are not serious.” I said, “I’m very serious. I’d like to have a long career.”

I studied with Max Margulis for 32 years, until he died. Last time I saw him in the hospital, he said, “Don’t worry. All you have to think about is clarity and phrasing.”The method he taught is called Bel canto. It’s very simple, but it takes 32 years to learn it.