Mark Bray, author of "Antifa: The Anti-Fascist Handbook," will give a talk at 6:30 p.m. Saturday, October 7, at the Gay Alliance of the Genesee Valley, 100 College Avenue. The event is open to the public; suggested donation, $5.

It's 2017 in the United States, and not only does the country have a growing anti-fascist movement, it may very well need it.

That's not to say that the US is hurtling toward fascism, the exact definition of which is somewhat fluid. In broad terms, fascism is a social and political ideology that melds authoritarian government; the squelching of political dissent and a free, independent press; and pervasive nationalism that often has racial elements.

"I'm not someone who thinks that we're going to see an explicitly fascist government or anything of the like, but we can see that white nationalist perspectives have had a disproportionate influence on public discourse," says Mark Bray, a Dartmouth College history lecturer who recently released a book on anti-fascist movements, "Antifa: the Anti-Fascist Handbook." Bray, a former Occupy Wall Street activist, takes a historical view of the anti-fascist movement in his book, though he is clearly sympathetic to the cause. 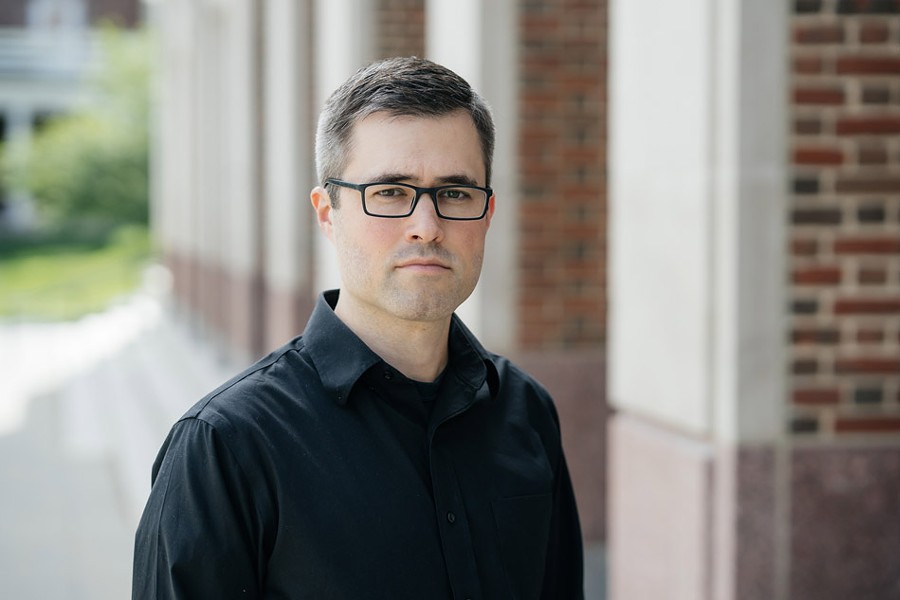 Donald Trump and some of his key advisers flirt with fascism through elements of white nationalism, including xenophobia and fear mongering. They fan the flames of Islamophobia, scapegoat immigrants, and discuss walling off – figuratively and physically – the country's borders.

But recently, a more blatant display of fascist elements happened in Charlottesville, Virginia. The Unite the Right rally brought together neo-Nazis, Ku Klux Klan members, white nationalists, and other far-right groups, in the name of protecting a symbol of racial oppression: a statue of Confederate army general Robert E. Lee.

Counter-protesters showed up to drown out the protesters' chants of "Blood and soil" – an old German nationalist slogan – and "White lives matter." Tensions escalated to the point that people from each side fought in the streets. A Nazi sympathizer drove his car into a crowd, injuring 19 people and killing a counter-protester, 32-year-old Heather Heyer.

And yet, a good bit of the national media coverage wasn't about the violent potential of white supremacists, or even the fact that they were glorifying an awful chapter of American history. It was that antifa, a movement that's been around in several iterations for decades, is violent. The movement received similar treatment after anti-fascist and alt-right protesters clashed in Berkeley, California.

Now, the right has made antifa activists its new bogeyman, and its talking heads characterize them as radicals – sometimes they're all called communists, sometimes anarchists – who want to beat people up and suppress speech.

Antifa groups have pressured colleges – sometimes unsuccessfully – to disinvite right-wing speakers from events on their campuses. Critics have also criticized the movement's strategy of outing people aligned with right-wing groups and causes.

Local antifa drew media and public scrutiny after outing a Honeoye Falls man who attended the Unite the Right rally; the man said he wasn't there with hate groups but to protest removal of the Lee statue. Some critics suggested that identifying the man was a call for violence against him.

But Eastside Antifascists volunteer Peter Berkman told CITY that the group wasn't calling for violence against the man.

"I think the way that we address this is by simply informing the community of who these people are," Berkman said – to bring them "out of the shadows." (Members of local antifa groups have since be unresponsive to CITY interview requests; antifa activists in general tend toward anonymity.)

Antifa's critics on the left, especially those in big media organizations such as the Atlantic or the New Republic, have also criticized antifa over its use of intimidation and physical force during far-right demonstrations,

But Bray defends individuals' use of force, whether in self-defense or as a means to shut down the rallies. And he says the focus on that one, small aspect of the anti-fascism movement ignores important context and the movement's century-long history.

Fascism can't be fought solely through conventional debate and politics, Bray says. It's an ideology that rejects reasoned argument and is instead based on emotional, irrational appeals, he says. It needs to be stopped before it gets a foothold, he says, and that includes denying white nationalist, white supremacist, and far right groups any platform at all. The groups and their philosophies are that objectionable, he says.

"Militant anti-fascists subsequently have argued that the struggle against fascism is not a conversation or debate," Bray says. "They don't view fascism as a difference of opinion," he says.

Physical confrontation is just a small part of what anti-fascist groups do, he says. Different groups in the movement take on different functions, though many are multi-purpose. Some are devoted just to researching fascist groups, as well as their leaders and members; others focus on community organizing; others are centered on responding to far-right rallies, events, and gatherings.

Bray will speak at 6:30 p.m. on Saturday, October 7, at the Gay Alliance of the Genesee Valley, 100 College Avenue. In a recent interview, he talked about the nuances of, and misunderstanding around, the modern anti-fascist movement. He also talked about its historic roots. What follows is an edited version of that conversation.

CITY: What exactly is antifa?

BRAY: Anti-fascism as a political tradition goes back 100 years, but it changed significantly after World War II. In continental Europe, they passed laws against Nazi parties, against fascist parties, and sought to prevent these kinds of politics from rearing their heads again through legislation and censorship.

Where this story picks up is that in the 70's and 80's and 90's, depending on where we're talking about, there was a resurgence of far-right activity. Part of that was spurred by the growth of a neo-Nazi skinhead movement exported from Britain. There was an increased xenophobia in response to waves of migration from elsewhere around the world.

Militant anti-fascism, which is the tendency that we're talking about here, developed in part out of punk and alternative scenes to defend themselves against the far-right; emerged out of immigrant communities to defend themselves when they were under attack; and is a rejection of the argument that the way to fight fascism is to pass legislation.

It's a pan-radical left politics. It's a way for anarchists and communists and socialists of different stripes, who disagree with the official left parties, to fight back. And then it's also a direct-action politics. That's sort of the specific tendency of militant anti-fascism as it developed in Europe in the 70's and 80's, as it came to the United States really in the late 80's into the 90's with Anti-Racist Action.

It's really sort of a politics or an activity. It's not one specific organization. It's a strategic tactical argument for how to resist the far right.

Who is part of this movement, generally speaking?

They're different kinds of leftists and anti-racists, most of whom, in my experience, also do other kinds of political activities. Some are environmentalists, some are trade unionists. In terms of professions, there are people that work at retail jobs, who are professors, who are students, who are nurses. It's hard to draw a profile, because a lot of this work is done out of the public eye. Anti-fascists don't want to be identified often because of the repression that can come from the police and doxing that can come from the right.

What does the public get wrong or misunderstand about the antifa movement?

There are a few things that have been sort of fed by the media. One is that it's entirely about punching Nazis. Certainly, anti-fascists advocate for self-defense, broadly construed. But when it gets reduced to sort of a Nazi-punching activity, the complexity and the historically informed nature of the politics get lost, and it's portrayed as being exclusively about confrontation. But that's sort of a small part of it.

Anti-fascists have historically handed out information; have done research on the far right, tracking them – especially in the internet age across multiple social media platforms – figuring out who their leaders are, where they hold events, contacting venue owners to cancel white-power punk shows or boycotting hotels who have conferences for Holocaust deniers. And in that way, it's a much broader politics, most of which is really acting, to some extent, like private investigators, doing a lot of drudgery, and publicizing this information.

Obviously right-wing groups and their sympathizers aren't going to respond well to antifa tactics. But the broader public doesn't seem to either. Why publicly identify people with potential links to right-wing groups or use physical force?

When it comes into the realm of direct action, of taking it upon ourselves, or our communities acting to go beyond the official channels to make a political change, that's when you get debate, whether it's about anti-fascism, whether it's about Occupy Wall Street, Black Lives Matter, or what have you.

Protest movements are never neat and clean. They always involve a variety of tactics and debates about them. Part of the takeaway is to understand that politics are messy and disruptive when they're working well, and you're never going to get complete unanimity over how to do anything on the mass scale politically. But I think it's incumbent on us, even if we disagree about how to fight back against the far right, to all find our own way to do so and focus on the common enemy and not get caught up in intra-left conflict.

How real is this threat of fascism in the US? What do Americans need to take very seriously, at least from a historical perspective?

Anti-fascists argue that even in small doses, fascism and white supremacist groups can be dangerous. Obviously we can see with the murders that have been committed that that's true: in Portland, Oregon, in Maryland, in Charlottesville, and elsewhere. From their perspective, those murders are sufficient to take these groups seriously.

Beyond that, they make a sort of historical argument pointing out that historical fascist regimes and movements have often started out really small. I talk about that in the book. But one example is that Mussolini's initial fascist nucleus was 100 men in 1919 before it became 250,000 two years later. But beyond that is a sort of institutional question.

And even just seeing the presence of, for a while, Steve Bannon and Sebastian Gorka in the White House and the fact that Trump retweets a lot of these accounts.... I think that there is a clear connection between certain white nationalist perspectives and individuals in the White House, which is very alarming.