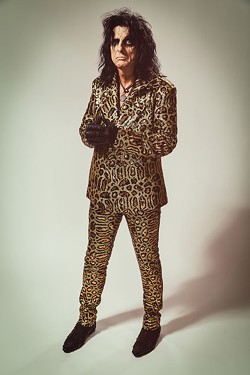 Alice Cooper’s life has been a strange journey that almost parallels a biblical story. The rock icon grew up in the church, abandoned it, almost died, and came back to embrace Christianity. Along the way, Cooper picked up a serious golf habit, established a nonprofit foundation for at–risk teenagers, and crossed paths with a host of famous people. Even at 71 years old, Alice Cooper still means business.

Cooper sounded matter-of-fact during a recent phone conversation, a few minutes before rehearsing with his band for a show in Dubuque, Iowa. He’ll be rolling in to Greater Rochester area on August 7 for a show at CMAC. An edited version of the interview follows.

CITY: When I was a boy, I read your autobiography, “Me, Alice.” It’s probably one of my favorite rock and roll books ever.

Alice Cooper: It’s so funny, because that was a great work of fiction. When we were doing “Me, Alice,” we were literally drinking and making things up as we went along. “Alice Cooper, Golf Monster” actually is the real story.

Will you be golfing in Rochester?

Very rarely do I get to a city where I don’t play nine holes. So I will be playing somewhere in Rochester. It’s weird that a character like Alice Cooper would be a two handicap.

How did you develop such a great knack for storytelling?

My dad was a wordsmith. He was a pastor. He couldn’t do a sermon without telling at least three jokes, but they were all appropriate to what the stories were. My dad kept me very sharp. We would challenge each other when I was a kid. He was very sharp and very funny, and I always wanted to be as funny as my dad. So he was sort of my hero when it came to that.

What keeps you going?

I never get tired of it. I’ve never sat there and said, “Maybe I should mellow out.” I think my lifestyle has changed a whole bunch, being married for 43 years with three kids and three grandsons, but that has never watered down Alice Cooper.

Everyone knows about my Christianity, the Solid Rock Foundation — that’s my lifestyle. When it comes to getting onstage and being Alice Cooper, Alice Cooper is still Alice Cooper. When you come to see the show, it’s like going to the carnival and going on that ride you’re not supposed to go on.

What is something you would never do onstage?

You shouldn’t do anything that would get anybody hurt. If anybody got hurt in my show, it was me. They always cut Alice Cooper’s head off. It was never anybody else getting skewered up there, unless it was a baby doll or something like that, which is an inanimate object.

Is creativity something you can turn off, or is it always running in the back of your mind?

When I start an album, my whole idea is that this is going to be the best album I’ve ever written. I don’t think I’ve written my best songs yet. I don’t think I’ve done my best shows yet. I think if you ask Paul McCartney, the same thing: he would say, “No, I haven’t written my best songs yet.” A real artist wants to do something better than the last time. I’ve always felt the next thing is more important than what we’ve done before.

What is at the heart of your appeal?

There was a huge change in my lifestyle when I quit drinking and everything like that. If I had kept doing it, I would have been gone in 1978. I could have easily joined the 27 gang, but I didn’t. God had different plans for me.

The fact that the show has always been the very foremost thing in my mind is that we’ve got to be the best touring band out there and we’ve got to put on the best show of anyone. That has never changed. So when people come to see Alice, we’ve never let them down.

You’ve maintained a sober lifestyle, but as cannabis is being legalized state by state, do you think there is any place for it in the creation or enjoyment of music?

If I were to make one thing illegal, it would be alcohol, not marijuana. If you’re walking down a dark alley, and there are five guys drinking on one side and five guys smoking on the other side, the guys drinking are going to give you hell. They are the ones that are going to beat you up. The guys smoking want to know if you have any Doritos, or “Where did you get those shoes?”

Where is the most unusual place one of your songs has been played?

When the “Trash” album came out, we had never been to Greece, and it was number one there for 26 weeks. You go to Iceland, and you find out your album is number one in Iceland and in places you never thought people even knew who you are. I guess hard rock translates to everybody. Hard rock will never go away, I think there is something primal about guitar rock, the way we play it.

The movie “Rumble: The Indians Who Rocked the World” references Native American contributions to rock. You have some Native American ancestry. Do you feel a link to that legacy?

I think there is something extremely tribal about rock. Think of it: it’s all drums. You have an audience that is waiting for you to give them the cue of what to rock to. All rock is based on drum beats, so if you want to take it back to the tribes — the real tribes where we all come from — that’s probably one of the most important things.

I totally believe in sensationalism. You can’t just get up and rock; and you know, bands like The Yardbirds and The Who, they were great at that. But to me, it was “Why not give them a visual show as much as an auditory show?” If you’re going to say, “Welcome to my nightmare,” give them the nightmare. To me it was important to bring the visual to it.

What is the best thing about being Alice Cooper?

I’m starting to think that the longevity of the career is amazing. I’ve got it down so much — being a frontman and a rock singer — that as long as the band is there and I’m healthy, to me it’s the easiest thing in the world.