"Aaah!" one woman shouts, running full-speed at another player.

"Woah!" the other yelps, flipping over backwards as she falls to the ground, taking a graceful bounce before coming to rest on the grass. But the scene is anything but graceful. About a dozen players, each encased in their own giant plastic bubble and dripping with sweat, stand on the field for a weekly game of bubble ball, a quirky, quickly-emerging sport across the country, with a growing fan base here in Rochester.

Bubble ball most closely resembles soccer. But instead of running around freely, players scramble about the field, encased in their own personal greenhouse — a giant, plastic inflatable bubble — while other players hurl themselves directly at you, flipping you head-over-heels. The fast-paced, bumper car-like sport reportedly started as a joke between Norwegian TV hosts Henrik Elvestad and Johan Gold on their show "Golden Goal" in 2011. After the episode aired, leagues started cropping up across Europe, and it eventually spread to the U.S.

"My brother showed me the YouTube video, and I said, 'How can we do this?!'" says Mark Constantino, who helped form Bubble Ball Extreme in Rochester last year. Constantino, who has a background in public relations, posted it to his professional Facebook page and said the requests flooded in. "All of a sudden people were asking, 'Hey, where can I sign up?'"

Constantino estimates there were roughly 450 players in Rochester playing in Bubble Ball Extreme's spring league during its first year. This year's summer league has about 600 players registered. 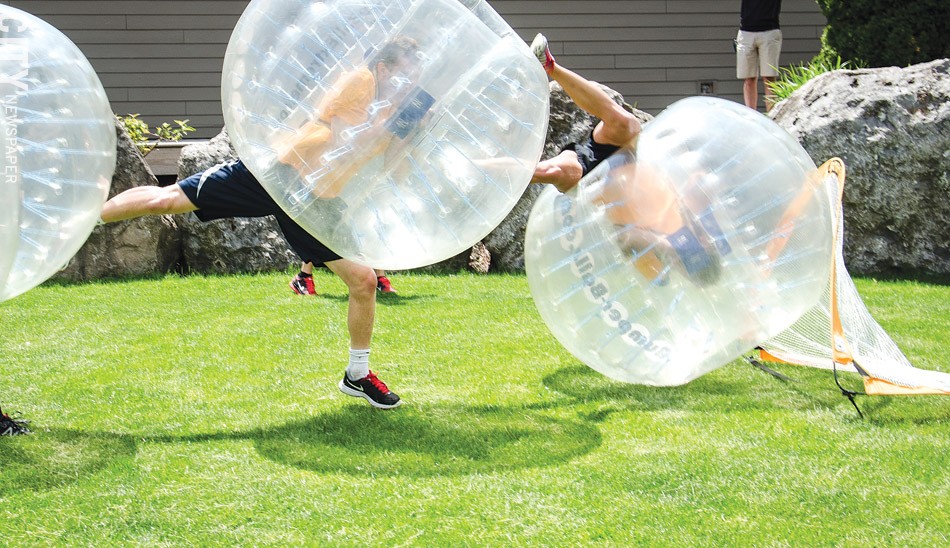 One of the returning players is Adam Mutch, who has been playing regularly for about a year. He heard about the league from a friend. "It looked like something I had never seen before," he says. "It was completely different than any other sport than I've ever tried."

Games are played with co-ed teams of four on four. At least two players on each team must be female. On top of trying to move around with a big balloon-like contraption on your upper body, teams are also trying to kick a soccer ball into the other team's goal. There are no goalies, so the nets are smaller than in soccer. "We've got to make it at least a little challenging," Constantino says.

The bubble straps on like a backpack, and while that part of it is relatively comfortable, things don't always stay that way once you're out on the field. "Especially during the summer, it gets pretty freakin' hot in those bubbles," Mutch says. "It's like a little green house on your body. Plus there's the added weight while you're sprinting around and try to smash into people. That's part of why it's so much fun, but after a few minutes, you have to catch your breath."

The folks at Bubble Ball Extreme really do try to stick to the idea of "anybody can play" — with or without athletic ability. "The people that have soccer skills obviously have better ball control and whatever, but at the end of the day, it turns out to be the type of sport where you're just taking as many shots at the goal no matter where you are on the field and you're gonna get lucky some of the time," Constantino says. "It's really funny to try and see people set up plays."

But with the free-for-all attitude, that pretty much goes right out the window, Mutch says. "There's only so much you can do. Once you get the ball, you have about three seconds before someone is running full-speed at you and knocking you over."

To add to the chaos, players can score a bonus goal, but it's tricky. If the ball gets kicked into the air and you catch it in the top of your bubble, you become the ball. All you have to do is run into the goal (without getting knocked over first) and your team gets two points instead of just one. "When that happens, the place just goes crazy," Constantino says.

The whole idea of the sport is to hit other players, but obviously safety has to come into play too. "This is supposed to be fun and casual and carefree — not a blood sport," Constantino says. When it comes to hitting other players, you cannot hit another player from behind. "We want people to be able to see that hit coming and anticipate it a little." Break this rule and you could get a warning or kicked out of the game.

Mutch says taking a hit can be intimidating. "That's like the scariest part, but once you do it, it's not so bad at all," he says. "If you've ever been jumping on a bed or a trampoline and then just let yourself fall, that's kind of what it feels like. It's very cushion-y, very soft. You feel it, you're gonna get shaken, but it doesn't hurt."

Despite how hard some of the hits look, Constantino says bubbles don't really pop. "Sometimes if people fall on the inflation valve, that will cause the bubble to deflate pretty rapidly," he says. In Bubble Ball Extreme's first year, they haven't had to replace any of their original bubbles.

And aside from a few rolled or twisted ankles, they haven't had any major injuries. That was something that was important to the team at Bubble Ball Extreme. "The first person I used as a test subject was my 65-year-old mother because I figured if she could do it, anyone could do it," Constantino says.

The response to bubble ball has been pretty universal, too, Constantino says. "They see us pull 'em out of the van, they watch us blow 'em up and immediately there's some sort of childlike enthusiasm — I think everybody had a dream at one point of being a bubble boy or bubble girl and just being safe and protected and have fun and laughing."

And that's part of the appeal, Mutch says. "You don't necessarily have to be the most athletic person — I mean, it doesn't hurt, but anybody can strap on a bubble and play." Mutch, who is 27 years old, says he's played against teams of 20-, 30-, 40-, and even 50-somethings. "I figure if they can keep doing it, I can keep doing it too."

After their first year's success, Bubble Ball Extreme set up a franchise and wants to launch leagues across New York state in Buffalo, Syracuse, Albany, and Charlotte, as well as Washington, D.C., next year. Constantino says they're getting calls every week from other cities looking to start a Bubble Ball Extreme league in their area.