In the modern beer landscape, tradition and innovation clash

Once a defining beverage of the craft beer scene, it’s not a style that draws much attention anymore. The same can be said about much of Sager’s roster, which includes traditional styles like the English dark mild and other time-tested varieties that are rare nowadays.

“As a brewer, I’m looking at barley, hops, water, and yeast,” Guarracini said. “The challenge for me is to see what kind of new flavors I can get out of just those four ingredients.”

In today’s craft beer scene, excess is king. Sour ales, for example, have burst into the mainstream through pioneering breweries like Pennsylvania’s Imprint, Avon’s Mortalis, and Indiana’s 450 North, with takes defined by being less beer and more alcoholic fruit puree. Meanwhile, IPAs have turned as murky as swamp water, juicy sweet, and in a constant fight to pack as much hop flavor as possible into each glass.

There is merit to those opulent styles, but for brewers like Guarracini, there is something lost in translation. He dubs himself “a classicist,” the sort of brewer who cherishes traditional formulas, some of them centuries-old mainstays from Europe.
The trouble is, they don’t always sell.

He’s not alone. Many brewers find themselves at a crossroads of what they want to brew and what is going to keep the lights on.

At Fifth Frame Brewing, owner Jon Mervine has made a name for himself with his decadent lemonade IPA series “Rural Minutes,” as well as with ultra-hazy IPAs.
But among the beers he treasures most are his light lager “Classic,” his Italian Pilsner “Dolo,” and his Franconian Lager “Autograft.” Those beers are not flying off shelves, however, and taking the leap on more time-intensive traditional beers like farmhouse ales is often a risk.

“During COVID especially, you can’t be spending your time on something that might work, or might sell, you have to go for the sure shot,” Mervine said. “2020 is the year of the cashflow.”

There’s myriad reasons traditional beer styles do not get as much attention in the craft beer world as the newer styles, not the least of which is social media. Ultra-fruited sours are vibrant in color, perfect for an Instagram post. Their often fleeting nature, with breweries constantly tweaking fruits and other additions, also make for a bit of exclusivity. You either buy it, or you miss out on the fun.

“Sex sells, you have to look good, you have to have good labels, you have to make a beer that’s thicker than another,” Mervine said. “There’s this sense of beer superiority, where people are now trying to cram as much fruit into a beer as possible.”

That culture of excess is deeply ingrained in American brewing. In the bygone heyday of West Coast IPAs, breweries found themselves in a bit of an arms race to create the most bitter beer possible. The same is now happening with fruit.

The difference between then and now is that the bitter IPAs of old turned some casual beer drinkers off, while the addition of excess fruit has attracted non-beer drinkers. In business, more is good, and therefore, those fruited sours are a near requirement for the modern brewery.

The head brewer at Irondequoit Beer Company, Nate Kester, found that out first hand. When Irondequoit opened last year, Kester had no plans to make a fruited sour, and hoped to produce mostly traditional styles. 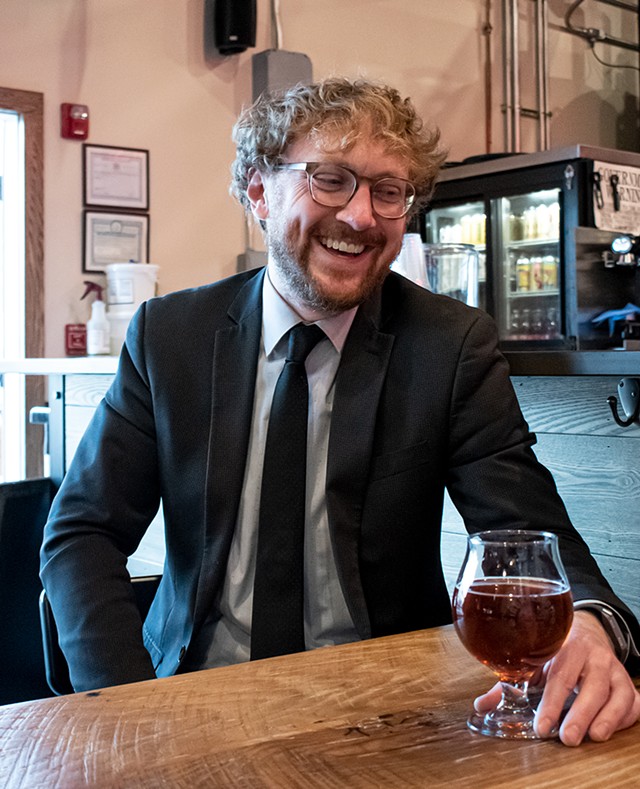 The brewery now has two fruited sours on tap. His personal favorite beer, a Belgian dark ale dubbed Fantome, is also among the brewery’s least popular.

“I think it’s important that the industry continues to progress and push ourselves forward and try things,” Kester said. “But I think it’s funny that what was once ‘trying something new’ has become the standard.”

Kester, Mervine, and Guarracini don’t want to see the new style of beers vanish. Rather, they hope that there is room for everything on the table, and the traditional styles don’t fall on the wayside to new innovation.

“I’m not sure if it takes education, or it takes curiosity,” Guarracini said. “But I think people need to be willing to try things, to explore new flavors, and be open to new experiences.”

At a modest 3.5-percent alcohol, this English dark mild packs a stunning amount of flavor. Easy-drinking and fit for a full day of liberal sipping, expect notes of cocoa, toffee, caramel, and a touch of roast.

This twist on a traditional German Marzen adds a heftier dose of caramel malt, pushing it close to an amber lager. Not overly bready with a wealth of malt sweetness, this beer finishes with a lovely herbal hop bitterness which leaves your palate yearning for more.

Crickets from Other Half Brewing Company
6621 State Rte 5 And 20, Bloomfield, NY

While known for their decadent IPAs, Other Half’s brewing team has shown a talent for masterfully brewing many different styles. Crickets is no exception — a light, nuanced, and endlessly crushable pilsner.

Brewmaster Dean Jones is a devotee of traditional German beers, and his take on a Dunkel is nothing short of a love letter to Bavarian brewing. Slightly dark, this beer packs malt sweetness with balanced hop bitterness.