In Rochester’s red-hot housing market, it's cheaper to rent 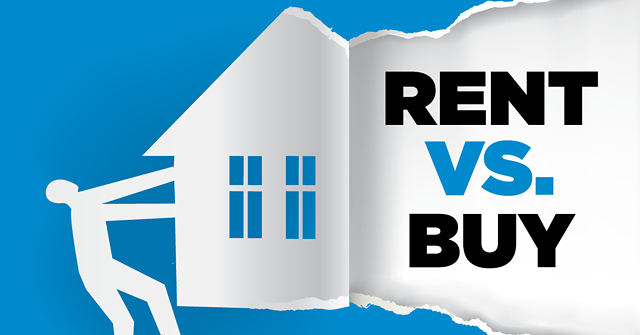 A raging seller’s housing market in and around Rochester has made it harder than ever for anyone looking to buy a home to get the one they want. Buyers with deep pockets are swooping in to outbid the competition, paying many tens of thousands of dollars over asking prices.

If you’re one of the countless aspiring homeowners who have been scrimping and saving for that down payment only to be stymied by skyrocketing demand, you can take comfort in knowing that you’re saving more than you might think — almost no matter where you live. 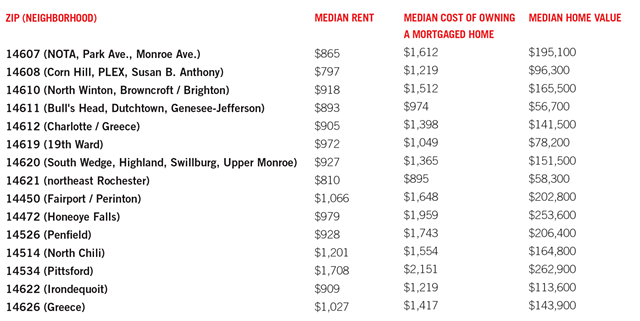 A CITY analysis of median monthly housing costs shows that across every ZIP code in Monroe County, renters spend less each month on housing than homeowners with a mortgage. How much less? About $450, for a difference of roughly $5,400 a year. 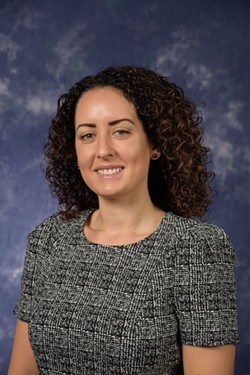 The analysis was inspired by a recent report from the online mortgage marketplace LendingTree that showed renting is cheaper than buying in all 50 of the largest metro areas in the country. Rochester didn’t make that cut, so CITY examined the same U.S. Census Bureau data that provided the basis for that study and found the trend held true here.

“Not everyone wants to own a home and have all the maintenance and do the yard work and long-term budgeting to save for a roof and for a furnace and all that other stuff,” said Mary Leo, executive director of The Housing Council at Pathstone, which provides services to homeowners, renters, and landlords in Monroe County and surrounding areas, including a first-time homebuyer course. “Renting is a great and important option.”

In the city, the greatest difference between the median rent and the median cost of owning a home with a mortgage was in southeast Rochester, specifically the 14607 ZIP code that covers portions of the Neighborhood of the Arts and Park Avenue, among other neighborhoods, at $747 a month. 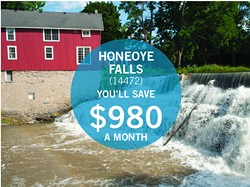 In the immediate suburbs, the gap between renting and owning was greatest in the 14472 ZIP code that encompasses Honeoye Falls, with the difference being about $980 a month.

The pattern held regardless of how poor or wealthy the ZIP code.

For example, take the 14621 ZIP code that spans northeast Rochester through Clinton and Joseph avenues and 14620, which covers the South Wedge and Highland Park areas.

The annual savings fell in favor of renting in the suburbs, too.

It may be tempting for renters reading these statistics to wipe the thought of buying a home out of their minds for now, or maybe forever.

After all, owning a home is not for everyone. Some people don’t want to be tied down. Others have trouble saving for a down payment. Empty-nesters may not want to deal with the expenses of maintaining a home. Younger people may want to live in an area where housing stock for sale is hard to come by, such as the heart of downtown Rochester.

But buying has its benefits, too — some quantifiable, some immeasurable.
For many people, owning a home is part of the American dream. When people buy houses, they have assets that typically appreciate in value over time and can be passed down to loved ones.

Home ownership also comes with tax benefits, a peace of mind knowing your landlord won’t change their mind about your living situation, and, for many, a sense of pride.

That’s conventional wisdom and the reason why everyone from your parents to government leaders have extolled the virtues of home ownership. 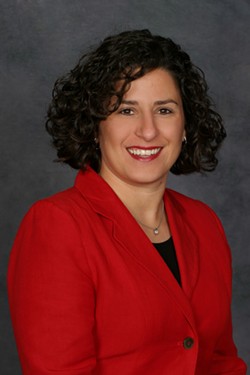 “I personally am a big proponent of owning if you can own just because . . . I truly believe it does build wealth over the long term,” said Lanie Bittner, president of the Greater Rochester Association of Realtors.

Then there are the monthly savings that come with having paid off the mortgage, when the median costs of renters versus owners flip across the board and, with few exceptions, land squarely in favor of owners.

Consider Pittsford, for instance, where renters saved $443 more a month on average in housing costs than owners with a mortgage. When that mortgage is paid, the data shows that owners save on average $774 a month more than renters.

In Rochester’s 14621 ZIP code, where renting was $85 cheaper a month than owning a home with a mortgage, owning a home outright yielded almost $400 in savings over the cost of renting, according to the data.

The only place in the immediate Rochester area where monthly housing costs for renters and homeowners without a mortgage was even close, according to the data, was in Honeoye Falls.

There, monthly housing costs for homeowners without a mortgage was $942, which was $37 less than the median rent of $979. At the same time, the median home value of $253,600 was the second highest among area ZIP codes, trailing only Pittsford.

NOT A COMPLETE PICTURE

What the census data does not reflect is how renters in and around Rochester are increasingly finding themselves in a position similar to would-be homebuyers who are priced out of the market.

That is to say that rents are rising in conjunction with home prices, and those increases are not evident in the data, which was taken from the 2019 American Community Survey, the most recent data available.

The metro’s rising rents are linked to the area’s rising home prices, which have been steadily climbing for the past five years, but shot up sharply during the past year.

The average home in Monroe County sold for $195,975 as of June, according to the real estate site Zillow, an increase of 18.5 percent from a year ago. According to the Greater Rochester Association of Realtors, the median sales price in the region, which extends beyond Monroe County, was 14.4-percent higher in the first quarter of 2021 than a year earlier.

In New York, a home’s assessed value is by law supposed to reflect its approximate market value. When homes sell above their assessed value, the value of nearby properties tends to go up, too. That usually means homeowners will pay more in property taxes, and if they’re landlords they may pass those additional costs on to tenants.

“We’ve seen certainly both rents and home prices go up recently, which may not be great for people who are getting into those markets to rent or to purchase, but I personally believe it’s good for Rochester” because people’s properties are gaining value, Bittner said.

Bittner added that even though the seller’s market has driven up home prices in Monroe County, house prices here remain below the national average, which the St. Louis Federal Reserve Bank pegged at roughly $400,000 in the first quarter of 2021.

Leo, of the Greater Rochester Association of Realtors, said that looking forward, the region needs to think about the overall inventory of affordable units for both renters and homeowners.

“We have some long-term planning to do in terms of making sure that we have enough affordable, quality housing at all income levels,” Leo said.