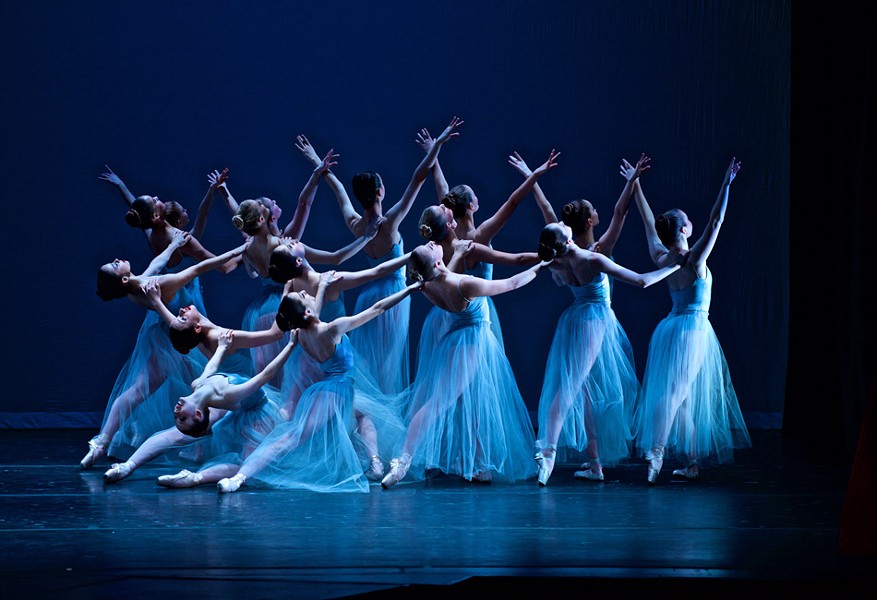 Next event is Thursday, February 5

A large dance studio lined with ballet barres and mirrors at Rochester City Ballet's University Avenue home was filled with spectators Tuesday night as the company rehearsed "Serenade," choreographed by George Balanchine and set to the music of Tchaikovsky. The well-attended event was part of the company's In Studio Series, now in its fourth year.

"The dancers say it's more nerve-wracking than being on stage," Artistic Director Jamey Leverett told City. "Having to share their performance of this piece in such a raw state can be a little stressful. They've only been working on it for five days."

Leslie Peck, a former Balanchine dancer appointed by the Balanchine Trust to teach select companies the master choreographer's ballets, was on hand at the event to explain the history of the ballet and to answer questions.

"Of course, when they perform it on stage, all the girls will be in a sea of blue," she told the audience in regards to the costumes.

For the open rehearsal the dancers wore practice clothes -- a wide array of variously colored leotards, short dance skirts, and leg warmers. The three principal dancers -- Jessica Tretter, Megan Kamler, and Lauren Tenney -- wore long practice skirts of pale blue tulle. Watching those three, it was difficult to believe they had just started rehearsals for "Serenade." Tretter especially seemed to embrace the joy and reverence of the piece; Kamler and Tenney more the grief and mystique.

The company will perform "Serenade" at Kodak Hall at Eastman Theatre on March 12 and March 14 along with a new four-act ballet by Leverett set to American composer Michael Daugherty's "Le Tombeau de Liberace." The Rochester Philharmonic Orchestra will accompany.

"The new piece will be a nice complement to 'Serenade,'" Leverett said. "'Serenade' is serene with some complicated pattern work, but its most simplistic moments seem the most beautiful. My new piece is fun, upbeat, high-energy, and elaborate. It's set in the style of Liberace."

On Thursday, February 5, RCB's In Studio Series will offer a first peek at that new piece. Come April 30, another new Leverett work, "Images: Musical Impressions of an Art Museum," will be the focus of an open rehearsal. This full-company, 50-minute piece is set to music by the RPO's Principal Pops Conductor Jeff Tyzik. After the performance, Leverett and Tyzik will offer insight into their collaboration.

Finally, in June (date to be determined), the open rehearsal series will close with Dancers as Choreographers, when Rochester City Ballet dancers are given the opportunity to create dance works on their fellow dancers.

Tickets for each evening of the series are $10 and include a glass of wine, a soda, or a water. Reservations are required, through info@rochestercityballet.com, or by calling 461-5850.