FILE PHOTO Liz Pritchard calls herself an autistic artist and advocate.
Liz Pritchard has been working from home during the pandemic in a home office, surrounded by her favorite things: posters of the comics she creates, original artwork, collectibles, and costumes she’s worn to Comic Con over the years.

Pritchard calls herself an autistic artist and advocate. While comic books are her primary focus, she’s also a painter, a poet, and a teacher.

“It’s good to surround yourself with things that make you feel good,” she said over Zoom. “Create an awesome environment for you to create.”

Pritchard said she wasn’t always good at expressing herself. Ten years ago, she was in high school, getting bullied. She transferred three times. On top of social anxiety, she was finding it hard to keep up with school work.

Even writing a simple journal exercise was a challenge.

“I would just scribble on the paper,” she said. “Not to be disrespectful; because I didn't know what to say.”

But a few good teachers helped her express herself and get her grades up, and even helped her develop as an artist. It made her want to be a teacher to help other students like her.

Her comics, she said, also changed her life.

“Over the years, I've learned that words did not always come easy, at all,” she said. “But through my art, I find a unique outlet in channeling my voice to help connect with others in amazing ways.” 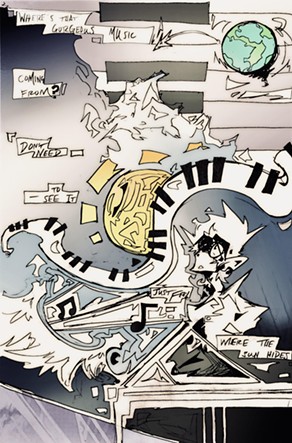 Pritchard based her comics on her own insecurities and anxieties. It helped her cope. The main character in her comic, Paper Bag Comic, was modeled after her, right down to the collections of sunglasses she wore.

Now, she said, she doesn’t focus as much on labels.

“I don't do that anymore,” she said. “I don't mention this character is autistic, and bipolar, and has this eating disorder — no, I don't. I focus on the human component a bit more.”

During the coronavirus pandemic, her work has evolved even more. Shutdowns affected her schedules and routines, which she said can cause a lot of anxiety and uncertainty.

The biggest change came to her teaching. Pritchard is an instructor with Spectrum Creative Arts — an art therapy collaborative in Rochester. She’s providing instruction exclusively over Zoom, but said she still hopes she’s making the connections with her students that her teachers made with her.

The shutdowns have also encouraged her to expand her own work and experiment with different media.

In the 10 months since COVID changed the world, Pritchard has created 80 paintings. She’s self-published a book of poetry. She even broke into video editing and edited a documentary series about disability rights in the workplace called "The Employables."

On her continued motivation, she said, “You can still create. The pandemic did not stop us from being creative.”

Some of this, she said, wouldn’t be possible if shutdowns hadn’t pushed her outside her comfort zone, and forced her to expand a virtual network of support and work opportunities.

“To all people out there who may be going through a difficult time, just keep expanding your mindset," Pritchard advised. "Keep finding that passion that works for you. You are more than your label. You've just got to find the right balance that works for you. Everyone is human, everyone deserves love, whether they realize it or not, and that's what I want people to know.”

This story is part of Dialogue on Disability Week — a partnership between WXXI and Al Sigl Community of Agencies — in conjunction with the Herman and Margaret Schwartz Community Series.