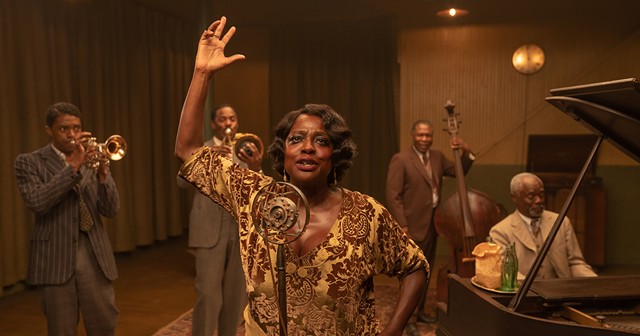 It’s all but impossible to watch “Ma Rainey’s Black Bottom” — the film adaptation of August Wilson’s 1982 stage play, inspired by the titular, pioneering real-life blues singer — without forgetting that at its center is the final performance of actor Chadwick Boseman.

The tragedy of Boseman’s death adds an additional poignancy to the film, but his work is powerful enough on its own. Playing Levee, the ambitious, showboating trumpeter in Ma Rainey’s band, the actor is positively electric, giving the performance of a lifetime.

Set on a sweltering day in 1927, when Ma (played by a nearly unrecognizable Viola Davis under heavy padding, gold teeth, and a thick layer of slathered-on makeup and sweat) and her band assemble at a Chicago studio to record a new album. The session has been arranged by Ma’s white manager Irvin (Jeremy Shamos) and bankrolled by producer Sturdyvant (Jonny Coyne), and they’re eager to get things started.

Ma’s running late, and while they wait for her, Levee and the rest of Ma’s band shoot the breeze. The group’s rounded out by Cutler (Colman Domingo), level-headed trombonist and bandleader; pianist Toledo (Glynn Turman), and bassist Slow Drag (Michael Potts). The narrative begins with the air of a hangout film, but there’s an edge to their conversations, and there’s some resentments obviously simmering under the surface of the lively banter.

Levee has talent to burn, and the younger musician has aspirations far beyond playing backup for Ma. He knows what he wants and intends to get it. Sturdyvant has promised Levee a chance to record his flashier, more modern song arrangements, but the band’s more veteran members know that Ma has a tendency to demand things be done her way or not at all.

Once Ma finally arrives, the session faces further delays due to her insistence that the intro to the first song be recorded by her stuttering nephew Sylvester (Dusan Brown). And then Levee starts making eyes at Ma’s pretty young girlfriend, Dussie Mae (Taylour Paige). Over the course of this long day, the stage is set for the various ideological, creative, and generational tensions between these characters to come to a head as temperatures rise and tempers flare.

Director George C. Wolfe is known largely for his stage work, winning Tony Awards for his direction of “Angels in America,” and “Bring in 'da Noise, Bring in 'da Funk,” a musical revue of Black history, which he conceived and directed.

Working from a screenplay sharply adapted by Ruben Santiago-Hudson, Wolfe retains much of the original play's theatricality. The majority of the film's fleet-footed 94 minutes remains confined to two rooms, in the recording studio and basement rehearsal room. And the filmmaker opens things up just enough that the story doesn’t feel trapped by its origins on the stage. He keeps his camera moving, and cinematographer Tobias Schliessler fills the frame with rich shades of gold and teal.

The loose atmosphere of the story grows tighter by the minute, centering more serious ideas about the exploitation of Black musicians by white record producers and how the musicians navigate — or fail to navigate — those waters. The film and the play it's based on both highlight the vital contributions Black Americans have made to this country and its culture, and how little the country seems to value them in return.

Central to the film are the towering performances of its actors, and every member of the ensemble takes the opportunity to dig into the play’s impassioned monologues. Davis is unsurprisingly good as the domineering Ma, but despite the film’s title, she winds up being more of a supporting character. This is Chadwick Boseman’s show all the way. Levee is ultimately a tragic figure, but it’s a treat to watch Boseman tear into the part with a fiery energy and swagger. It makes a sharp contrast for those who know him best for the stoic side he displayed in his roles as Jackie Robinson and as T’Challa in Marvel’s “Black Panther.”

When Boseman died in August at the age of 43 following a four-year battle with colon cancer, his death came as a shock. He kept his battle private, and no one expected to lose one of our finest performers, especially when he was seemingly in his prime. It’s only a slight comfort that his performance in “Ma Rainey’s Black Bottom” is at least a fitting swan song, showing off the full breadth of Boseman’s talents. Even as we mourn what was lost when he passed, he’s left behind a legacy and body of work that’s sure to inspire generations to come.

Adam Lubitow is a freelance writer for CITY. Feedback on this review can be directed to Rebecca Rafferty, CITY's arts & entertainment editor, at becca@rochester-citynews.com.