In 'Constellations,' one couple connects across many universes 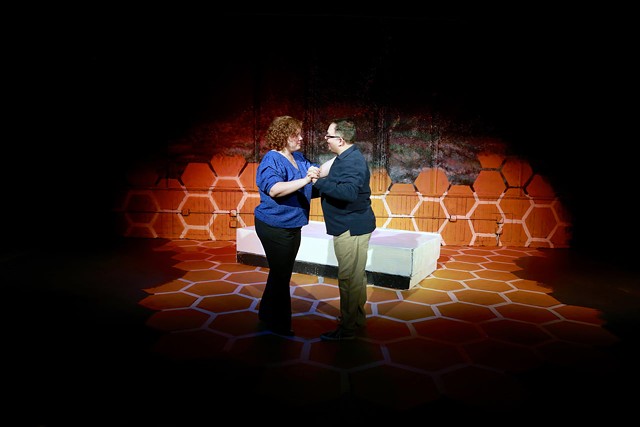 “Constellations,” written by Nick Payne, mostly operates on a gimmick: Roland and Marianne meet each other, date, break up, get back together. Sometimes. The play jumps through parallel universes where a beat gets played out in several different, usually contradictory, ways.

Because the Out of Pocket, Inc production is staged in our universe — that is, the one with the pandemic — it is physically performed and recorded (by Anthony Carter) at the MuCCC, but streams on ShowTix4U through March 6. The limited laughter and applause for actors (and real-life married couple) Jeff and Stephanie Siuda, was a reminder of the realities of theater in the age of COVID.

The script, which consists of abrupt stops and starts as it stutters through universes, presents an almost insurmountable challenge to any production. It’s hard to keep an audience engaged when anytime they start to understand a scene, the situation and emotional stakes disappear and new ones begin.

One moment, Roland is cheating on Marianne. Ten seconds later, Marianne is cheating on Roland. In one universe, Roland is physically abusive. In another, the characters communicate through ASL. Despite wildly different life experiences, choices, and desires, the play expects audiences to accept that each scene is showing some version of the same two people — a feat the Siudas miraculously pull off.

Even when the same dialogue repeats in different universes, without much new context provided by the script, the actors are able to make the words sound emotionally distinct — from romantic to angry, indifferent, or hurt. 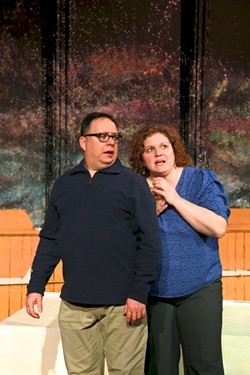 One of the only continuities across universes is the characters’ occupations: Roland is a beekeeper and Marianne an astrophysicist. The painted background combines these careers to create an abstract setting of beehive and cosmos. Though aesthetically pleasing and appropriate to the play, the scenes go so fast that it would help to have a few more clues in the design to ground the constantly shifting times and places.

Likewise, the costumes — business casual attire — are generic enough to match any given timeline, but don’t give the audience additional insight to the characters or story. But it’s hard to be overly critical when the script places an unfair burden on designers to fill in the gaps of the story.

The production finds its appeal through the real-life chemistry the Siudas bring to their roles. Even when the characters are first meeting each other, or broken up, the actors share a warm familiarity that hints at the inevitability of Roland and Marianne’s relationship.

The thoughtfulness the actors give to making each universe feel distinct and equally rich, aided by director Kevin Indovino (a producer, director, and editor at WXXI), carries the show.

The production runs for just under an hour, which is just about as long as the premise can withstand. A late reveal attempts to justify the play’s fractured structure. Stephanie Siuda delivers this shift with just enough gravitas, and successfully lands an emotional punch.

The script hints at intriguing questions about multiple universes, but fails to provide the characters or story to explore these questions in a compelling way. But it does invite the audience to contemplate mortality and the way small changes can have drastic impacts on our lives. And though this story is presented through the narrow scope of a white heterosexual couple, the fear of losing a loved one has broader resonance.

It also feels decadent, in the age of COVID, to experience a production fully-staged by local actors, especially one with several moments of physical intimacy through touching.

“Constellations” ends on a bittersweet note. Although things look bleak on the larger scale, the final scene offers a moment of comfort and hope — much like streaming this production during a pandemic.

"Constellations"
Continues Friday and Saturday, March 5 and 6, at 7:30 p.m.
Virtual performance available for view on Showtix4u
$15 for individual ticket, $25 for a family pass

Katherine Varga is a freelance writer for CITY. Feedback on this article can be directed to Rebecca Rafferty, CITY's life editor, at becca@rochester-citynews.com.