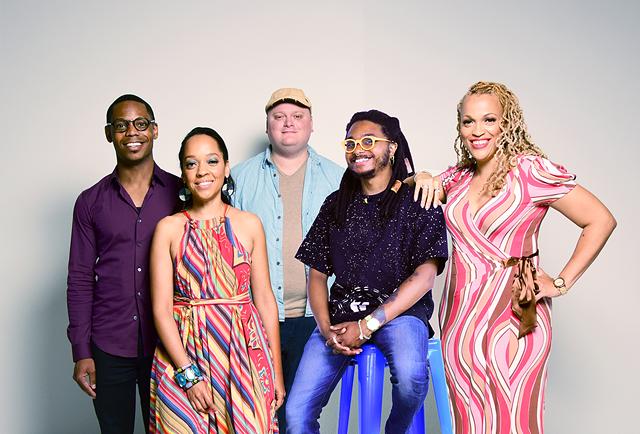 The wind quintet has a relatively short history, and its literature might seem limited as well. But Imani Winds has spent a quarter of a century pushing those limits.

The Kilbourn Hall concert celebrates composers of color — Black, Indian American, and Latin American — all living and almost all with connections to the quintet: Former Imani Winds members Jeff Scott and Valerie Coleman are represented with “Titilayo” and “Rubispheres No. 1,” respectively, as are Imani-commissioned works by Reena Esmail, Paquito D’Rivera, and Wayne Shorter. Concluding with Brazilian composer-conductor Júlio Medaglia’s “Belle Epoque en Sud-America,” the concert is a sampler of some of the things Imani Winds does best — Latin dance rhythms, North Indian ragas, and jazz harmonies.

Imani Winds has played at Eastman several times, and this visit will be a typically multitasking one. Ellis will give a bassoon master class and members of the group will give a chamber music class and a session on the business of music and entrepreneurial opportunities.


Imani – meaning “faith” in Swahili – was founded in 1997 by flutist and composer Valerie Coleman to promote and commission music from underrepresented communities in collaboration with composers and performers. Imani’s initial members were all of Black or Latino heritage. One of those founding members is bassoonist Monica Ellis, who is also the ensemble’s executive manager and tour manager. She met Coleman and the other musicians who collectively became the Imani Winds while studying for her graduate degree at Manhattan School of Music.

“We enjoyed ourselves so much, we decided to stay together,” Ellis said. “We had no sense that we were trying something monumental. When you don’t know that you can’t do something, it doesn’t seem so hard. We had safety in numbers. We had each other’s backs.

“And we also had a heck of a lot of luck – and chemistry.”

After putting on a short concert series of their own and placing in several competitions, Imani Winds performed at Carnegie Hall in 2001 and was signed by Concert Artists Guild as an “educational residency ensemble” – a very new idea then. “That changed everything for us,” Ellis said.

And it eventually changed the music business. “Everybody does outreach concerts now,” she added.

Success as an educational ensemble led to commercial management, and a demo recording led to a first CD release, “Classical Underground,” which received a Grammy nomination. The group is currently the faculty woodwind quintet at the Curtis School of Music.

Imani Winds’ “classical music” background is extensive, but the quintet has put its
faith in music of the here and now, by composers who comfortably straddle the
worlds of classical music and jazz — such as Paquito D’Rivera and Wayne Shorter
— as well as composers whose work uncomfortably reflects current realities:
immigrant detention, social inequities, violence, and the status of minorities.


Among their current projects, composer Jessie Montgomery’s “Sergeant McCauley” was inspired by her family’s participation in the Great Migration, in which 20th century Black southerners moved to northern and midwestern cities, and Fairport native Vijay Iyer addresses the 2012 killing of Trayvon Martin in “Bruits,” from their current, Grammy-nominated album. The word, pronounced “broots,” is a medical term referring to the noise of obstructed blood flow in a blocked vein. Imani Winds’ description of “Bruits” makes the metaphor clear: “We are already connected. We are just blocked. Bruited. Speaking our truths can help clear the pathways of unity.”

Any kind of music, and most any subject matter, is fair game. The quintet’s programs have highlighted immigrant composers of color, the Parisian Jazz-Age sensation Josephine Baker, and Coleman’s musical portraits of notable women of color. In one of their most audacious programs, Jeff Scott’s “Passions,” the music of J.S. Bach’s “Goldberg Variations" and John Coltrane’s “A Love Supreme” meet on an equal footing.


“Obviously there will always be contemporary music,” said Ellis. “But in the past 10 or 20 years I think there is more appreciation of new music, and the possibility has increased that an emerging group can specialize in contemporary music.

“When the status quo notices you – the powerhouse schools and organizations, and the big stages – then you know that the ivory tower status of classical music is not really there now.”

David Raymond is a freelancer for CITY. Feedback on this article can be directed to dkushner@rochester-citynews.com.