PHOTO BY PETER PARTS FOR THE CGI ROCHESTER INTERNATIONAL JAZZ FESTIVAL The 2019 CGI Rochester International Jazz Festival features nine nights of concerts on Parcel 5.
Mayor Lovely Warren is launching an “If I Were Mayor” essay contest that asks eighth-graders to describe how they would create more jobs, safer and more vibrant neighborhoods, and better educational opportunities in Rochester if they were in her seat.

I’m not an eighth-grader, but I have a kid that age at home, so here goes nothing:

If I were mayor, I would concede defeat to Parcel 5 and admit that no developer who isn’t under indictment wants eight acres of shovel-ready prime real estate in the heart of my city.

My concession speech would be a public affair on location, delivered against the backdrop of hundreds of pallets of sod. The entire city would be invited to cry “Uncle!” in unison and lay down a strip of 2-feet-by-5-feet grass for a suggested donation of $2.

Proceeds would go toward a contract with the artists Shawn Dunwoody, who devised the piano crosswalk at Main and Gibbs streets, and Mike Dellaria, famous for his wheat-paste murals of Mr. Rogers and Spock on I-490 overpasses. I wouldn’t commission anything from them. I’d just let them do their thing and trust they’d make the city cooler. 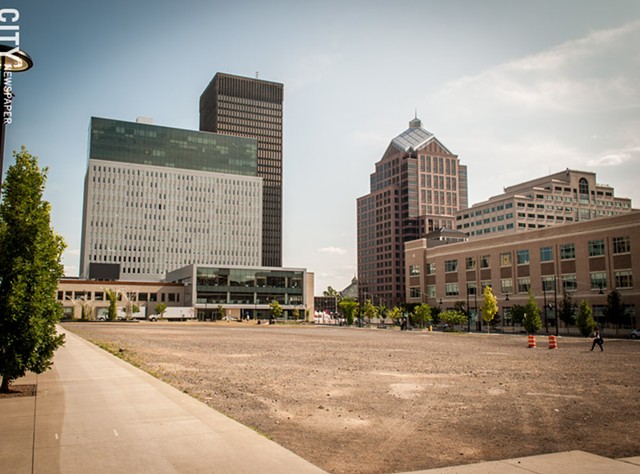 Count me among those people who wanted Parcel 5 developed vertically. But after six years of staring at that grim and depressing gravel patch that only comes to life intermittently for festivals and impromptu Wiffle ball games, the need to beautify it has become obvious.

The parcel seems destined to be a year-round entertainment space and the city is pursuing state funding to make that happen. Considering how long it has taken to get nothing done there, however, a facelift is in order while we’re waiting for money to materialize.

Speaking of facelifts, as mayor I would rally federal, state, and business leaders to secure grants to fill in the rest of the Inner Loop. That stretch of sunken highway is a relic of antiquated urban planning that’s choking off city neighborhoods from easy access to downtown. Lose the cars and set aside a few square blocks for a pedestrian mall.

While we’re on the subject of downtown, let’s drop this “center city” nonsense already and call downtown what it is — downtown. Officials have tried shoehorning “center city” into our lexicon for two decades now, and it isn’t sticking. It’s like “The College at Brockport” and “The Artist Formerly Known as Prince.” Everyone knew they were SUNY Brockport and Prince.

Rochester should stick to its roots, but not dwell on them. The city has an unhealthy relationship with nostalgia. We live in a paradox of perpetually awaiting change while stubbornly refusing to let go of yesteryear. That’s got to stop.

What also must be stopped are those motorcyclists who ride their crotch-rockets full throttle in the wee hours of the morning. I haven’t devised a fitting punishment for them yet, but it would be such that they would only offend once.

Perhaps the answer is an old-fashioned public shaming. We could perp-walk them onto the remade Parcel 5, where they would be put into stockades alongside landlords who don’t provide their tenants with adequate heat.

Marketed properly, the spectacle would be a huge draw. With the influx of tourists, we could convince Monroe County to allocate a portion of hotel-motel tax revenue to the arts, for which permanent funding is sorely needed.

Spectators could picnic on the new lawn and pelt the guilty with their lunch leftovers. No need to clean up afterward; the 25,000 crows that roost downtown will take care of that.

Those birds are part of our city now. We ought to embrace them. The yearly fruitless attempts to scare them off would end under my mayoralty, and the crow would become the official bird, replacing the eagle holding the “Flower City” ribbon on the city seal.

Unscrupulous landlords are the worst. Too many city residents pay too much to live in squalid conditions. The new housing court should help keep bad-apple landlords in check, but what’s really needed is rent control.

The city has embarked on a vacancy survey of certain housing stock that could lead to limits on rent hikes if the vacancy rate is found to be below 5 percent. My administration would make sure that happens, even if it meant hiring developer Bob Morgan’s son and nephew to stage apartments to appear occupied. They could place shoes outside doors like they did at their other properties to trick banks into lending them money they didn’t need.

Because you know who needs money? Poor people. A third of all city residents live in poverty.

If I were mayor, I would give poor people money. No strings attached. Public assistance benefits are administered through the county, but any chance I get to dispense funding for needy people, I would see to it that the money went directly to them.

On that note, I would relentlessly pursue state legislation to blow up the Board of Education and put the district under City Hall. The buck would stop with me and not a board of incessant micromanagers who can’t stop driving superintendents out of town and running up deficits.

Of course, none of this would be easy to accomplish. Then again, neither is becoming mayor.