"I claim my birthright! ... Joy reborn after the vast sadness of War Gods! A lone man talking to myself, no house in the brown vastness to hear, imagining the throng of Selves that make this nation one body of Prophecy languaged by Declaration as Pursuit of Happiness!" 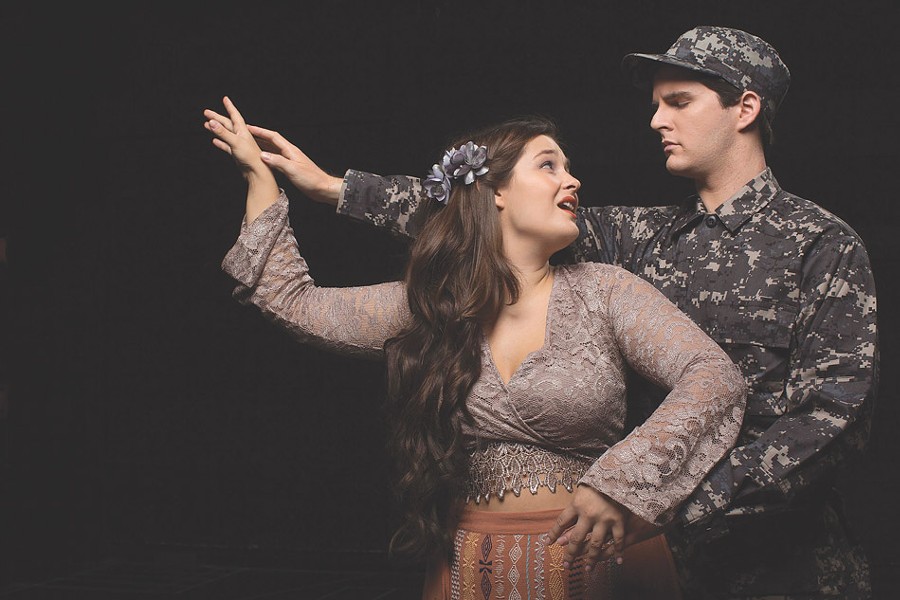 The Beat poet and counterculture icon was staking claim to something elemental. And though the words are somewhat stilted, they still endure, in part through the 1990 opera "Hydrogen Jukebox," written by Minimalist composer Philip Glass.

The opera emerged out of a one-off collaboration between Ginsberg and Glass for a Vietnam Veterans Ensemble Theatre Company benefit, in which "Wichita Vortex Sutra" was set to Glass's hypnotic solo piano music. The work eventually became the poignant end to Part 1 of the opera. Ultimately, a complete libretto was crafted from selections of Ginsberg's poetry — most notably the masterpiece "Howl" — and the resulting collection of songs were shaped by director-choreographer Ann Carlson into a story following six American archetypes: a priest, waitress, businessman, cheerleader, policewoman, and mechanic, respectively.

"Hydrogen Jukebox" had been on Daigle's radar for a decade, but the director says he was waiting for the optimal moment to present the unconventional, dramatically pliable opera.

The score contains no plot cues, and there are no detailed descriptions of scenes. The only indications given are for the required voice types: two sopranos, a mezzo-soprano, tenor, bass-baritone, and bass. With this "tabula rasa" in place, Daigle began to conceive of an original drama in which the six characters are members of an unusual kind of church devoted to the worship of the modern American capitalist war machine, identified by Ginsberg in the libretto as Moloch.

"Moloch, yes, it is a god," Daigle explains, "but it's symbolizing something much greater than that. It is identifying a lot of different things that, in god's name — being different gods — there has been war, there has been death, there has been destruction. And of course, governments have been built on that in a lot of ways, so it allows us to kind of reflect and look at what our sort of world has become."

Apocalyptic deities aside, the most intriguing adjustment to the opera is Daigle's expansion of character development from six archetypes to 18, in which each singer portrays three separate archetypes in a single character who changes over time. The singers themselves were intimately involved in the construction of their own characters, creating monologues that unified the three archetypes in one cohesive narrative, among other thought exercises.

"We had to actually come up with these backstories and consider how these different archetypes at different periods in American history, how they are related, and how one of them might become another one even if you wouldn't expect them to be related at first glance," says bass-baritone Isaac Assor, who plays the triune role of the church preacher-turned-Beat poet-turned-class nerd.

The twist is that the chronologies of these characters' lives unfold in reverse, beginning at the church in the 1990's before returning to 1960's and early-70's culture and ultimately settling on their former selves amid the Americana of the 1950's.

"Much of the time in our opera actually does go back in time, and I envision that we are seeing how we got to this state, how we got to this world in which individuality is crushed and we're all part of this bigger government machine," Assor says.

In the process of working through the plot, the singer also noticed a compelling paradox at work. "By exploring all of these different themes in the poetry, that we're getting out of this state where individuality is so restricted, into a more enlightened state," Assor continues.  "And yet the way that the archetypes progress, we are actually going back in time. So I think that that will be a little bit open to interpretation, but you can see that the way that we find our way out of this dystopia in the beginning is actually through exploring the past."

Musically, the singers faced other distinctive challenges particular to Philip Glass's music. Soprano Celeste Pellegrino, who plays a businesswoman-hippie-fashionable high schooler, found that the memorization of the score's bulky Minimalism was daunting, but relied on Eastman's extensive aural skills training to learn the music. Ultimately, Pellegrino found that the opera transcended her preconceptions about the composer's style.

Assor is quick to note the difficulties of tackling Glass's complex sense of rhythm, though he credits Spencer Reese's choreography with helping to master this musical element. He also marvels at the strange chemistry between the music and Ginsberg's words.

"It's interesting to have that music set by Philip Glass because Philip Glass's music is extremely rhythmic," Assor says. "And it almost uses the voice as if it is another instrument, as if it's another rhythmic instrument. You're using the consonants as if they're drums. And so I think it's an interesting pair, because here you have this music that is very repetitive and almost trance-inducing, using text that is so free and so unrestricted. And you wouldn't think that they would be the most obvious pair for one another, and yet the product of the two together is really unlike anything I've ever heard before."

EDITOR'S NOTE: This article has been updated to correct and error in Allen Ginsberg's quote.