November 05, 2020
Hundreds of businesses and organizations that have contracts with Monroe County have received letters with dueling messages in recent weeks from the two most prominent officials in county government.

An Oct. 20 letter from Democratic County Executive Adam Bello contends that their contracts could be affected by a power grab being made by the Monroe County Legislature.

A subsequent letter dated Oct. 29 from the Republican-controlled Legislature’s president, Joe Carbone, contends that Bello is trying to “gaslight” them into believing their contract is in jeopardy.

“That is not true, and his letter is borderline extortion,” Carbone wrote. “This letter will set the record straight and reassure you the county will function despite County Executive Bello’s ineptitude.”

Carbone’s letter was signed by the Republican Majority Leader Steve Brew, and two Democratic legislators, Vincent Felder, whose position as the minority leader is in dispute, and Ernest Flagler-Mitchell, the head of the newly formed Black and Asian Caucus.

The conflicting letters are the latest growing pains of the first divided county government in almost 30 years, whose divisions have been widened by a breakaway faction of Democrats that has formed a bloc with the Republican majority. 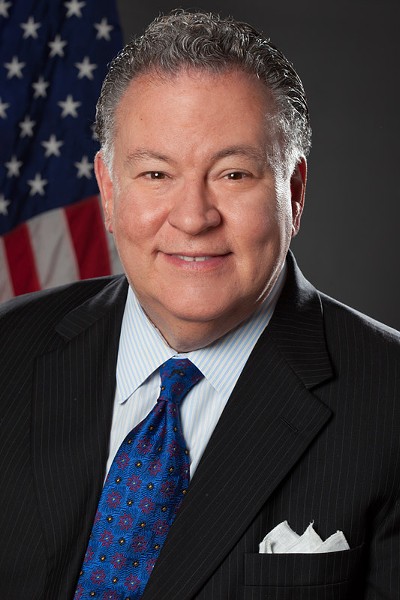 At issue is the county executive’s authority to modify contracts without approval by the Legislature — an ability the executive has had since at least 1988. The modifications could include small tweaks carried out for the sake of expediency, like signing a change order, or more significant alterations, like terminating a contract altogether if the funding for it dries up.

Early last month, Majority Leader Steve Brew informed Bello in writing that, upon reviewing these practices, the Legislature viewed the authority as “troublesome and contrary to the fundamental principles of checks and balances.”

Moving forward, Brew wrote, the Republican majority would no longer support contracts that authorize the county executive to make modifications to them “beyond what is necessary to carry out the fundamental purpose of the legislation.”

Republicans lost a 27-year hold on both branches of county government last year when Bello became the first Democrat elected county executive since 1987.

In response, Bello fired off a letter to upward of 200 businesses and organizations with county contracts, according to his administration, informing them of the Legislature’s move and calling in a “drastic change in county operations” that “could impact our contract with your organization.”

His letter did not outline how any specific contract could be affected, but explained that the move could delay projects and cost taxpayers more. 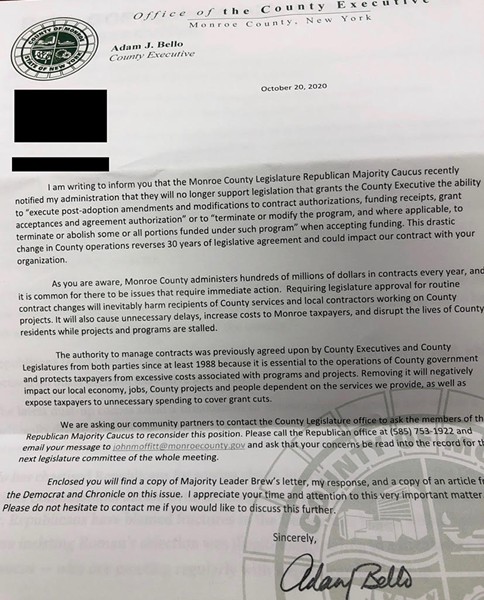 “Requiring Legislature approval for routine contract changes will inevitably harm recipients of county services and local contractors working on county projects,” Bello wrote. “It will also cause unnecessary delays, increase costs to Monroe taxpayers, and disrupt the lives of county residents while projects and programs are stalled.”

Carbone countered in his letter to many of the same businesses and organizations that his Republicans, bolstered by a band of Democratic legislators, “are trying to protect your business dealings with the county, not stall projects by micromanaging change orders and contract amendments.”

His letter went on to accuse Bello of being “hyper-partisan” and assert that legislators have had to rectify contracts gone awry due to Bello’s inability to answer basic questions.

A spokesperson for the Republican majority specified that Carbone was referring to questions about whether minority- and women-owned businesses were considered when procuring some county contracts.

Republicans hold a slim majority in the Legislature, occupying 15 of the 29 seats. But five Democrats, led by Felder and Flagler-Mitchell, have joined with the Republicans on most legislative matters of late, forming a veto-proof majority.

The Democrats in question broke away after losing a months-long and bitter fight to confirm the county’s newest Democratic elections commissioner.

“This bipartisan group of 20 legislators strong represents a veto-proof majority that controls nearly all facets of county operations,” Carbone wrote. “It takes 18 votes to override a county executive veto — we have 20.”