Hundreds gather outside the Monroe County Office Building in protest

The rally, which began around 1 p.m., was orderly and mostly confined mostly to one city block along West Main Street between State and Fitzhugh streets, with protesters milling about carrying signs of "End Police Brutality," "Power To The People," and "Equity, Justice, Systematic Change."

At one point, protesters laid down in the street in silence for eight minutes and 46 seconds, the length of time Police Officer Derek Chauvin kneeled on the neck of George Floyd, whose ultimate death sparked the series of demonstrations.

It was a gesture that demonstrators repeated hourly in solidarity with Floyd and other victims of police brutality.


Some protesters who were bellied up to the barricade chided police officers, who remained silent.

"Please don't tear gas us" one protester said. "Don't make us talk, there's still a pandemic going on," another said. For a while, demonstrators chanted, "RPD, take a knee!"

Later in the afternoon, however, the chiding grew antagonistic, as some protesters taunted officers with expletives in an effort to get the officers to speak. The officers did not bite.


With intense focus on police actions against protesters around the country, it is perhaps noteworthy that the troopers are not wearing badges on their uniforms and that this is a standard practice for state police in New York.

Shortly before the start of the protest, Mayor Lovely Warren released a video message in which she urged residents to work together to address structural racism.

"Any discussion of a path forward must first begin with us as a city, county, state, and nation accepting the undeniable truth that our nation’s history was built on a foundation of inequality and racism—including the original sins of colonization and slavery," Warren said. "What we are witnessing and living through at this moment and the countless times before are the direct results of these historic atrocities." 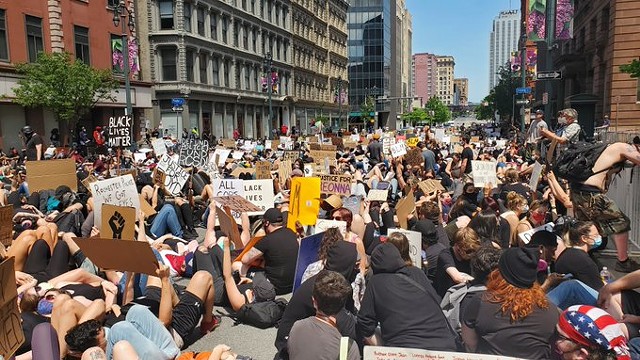 Parts of Warren’s message also felt like a veiled plea for protesters to refrain from destructive acts, like those that enveloped Rochester over the previous weekend. The Black Lives Matter protest staged on May 30 was followed by chaos and looting throughout pockets of the city.

"So while we must — and we will — rebuild, repair, and restore our city’s business sector, we must meet the immediate needs of our citizens. I heard you. I heard you before and I hear you now," Warren said. "We will not stop at merely treating the symptoms of violence and its aftermath. We will dedicate ourselves to fundamentally changing our institutions, our economy, and our government in order to eradicate systemic inequality and racism."

This is a developing story. Check back for more details and follow @GinoFanelli on Twitter for a real-time rundown of events.