How the pool table that shaped Martin Luther King Jr. came to Rochester 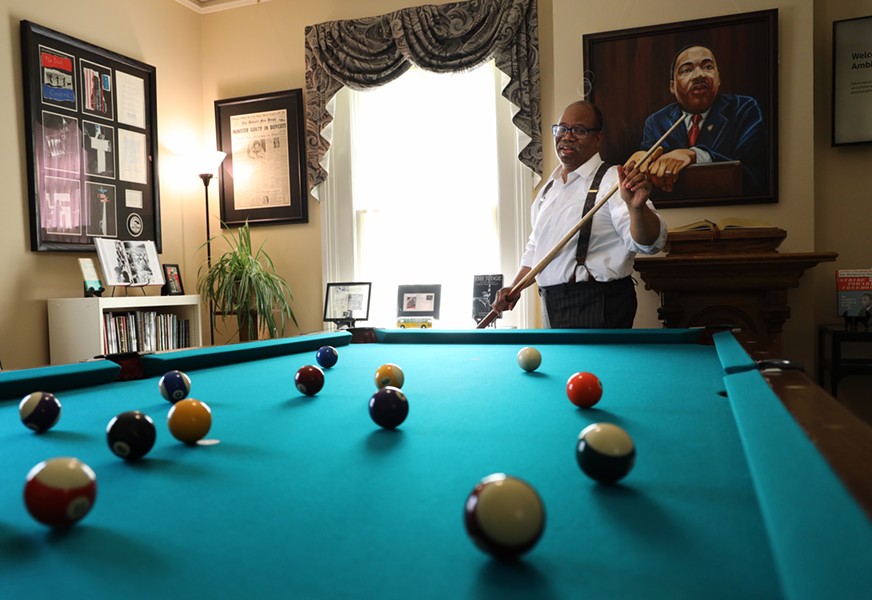 PHOTO BY MAX SCHULTE Van White plays pool on the table that Martin Luther King Jr. played on while a student at Crozer Theological Seminary. White had the pool table restored and placed it in a room in his law office dedicate to King's legacy.
Many people might be surprised to learn that before he led the Montgomery bus boycott or March on Washington, Martin Luther King Jr. honed his passion for social justice and genius for connecting with the common man around a pool table as a student at Crozer Theological Seminary.

Still more might be surprised to learn that that pool table spent the better part of the last 50 years in and around Rochester and is today on the second floor of a civil rights lawyer’s office in the Grove Place Historic District near the Eastman School of Music.

“I do get goosebumps when I play on the table or touch the table,” said Van White, who recently acquired the table, had it restored, and placed it in a room dedicated to King’s memory in his law office.

White is perhaps best known in Rochester as the longtime president of the city’s Board of Education. But he wears many hats, including that of a lawyer and, currently, candidate for Monroe County Court judge.

He is also, though, a collector of artifacts of the civil rights movement. Most of his law office, which not coincidentally is housed in a 19th-century Italianate mansion with ties to Susan B. Anthony’s lawyer Henry Selden, has been turned into a museum called the Center for the Study of Civil and Human Rights Law.

The center is a labor of love, both intriguing for the pieces it holds — from leg irons used on enslaved Black people to a monogrammed shirt and hat owned by President Lyndon Johnson — and endearing for the aspirations it doesn’t quite reach. One room is filled with a hodgepodge of Woolworth’s paraphernalia that White hopes one day to use to recreate the lunch counter where four Black students sat in defiance of segregation in 1960.

He calls the center “the house bigots built,” a nod to the discrimination and neglect cases he has won that enabled him to amass his collection, which includes a 1950s-style bus that is the same model as the one in which Rosa Parks refused to give up her seat. The bus, White said, was recently broken into by vandals.

The latest item to be added to the collection, and perhaps the most historically significant for its contribution to shaping a man known the world over, is the pool table traced to King. 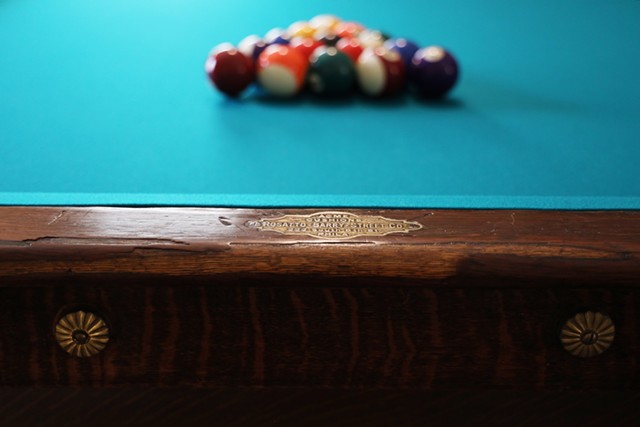 At that table King is said to have played eight ball until the wee hours of the morning, philosophized with fellow seminarians, and emerged from the shadow of his disciplinarian father to become his own man.

The table had sat for decades in the basement of the central dormitory of what was Crozer Theological Seminary in southeastern Pennsylvania. The three-story, stucco-coated stone building was known as Old Main and had been used as a hospital during the Civil War. When King took up residence there in 1948, he was assigned to a room on the second floor that had once been occupied by a Confederate soldier.

By most historical accounts, there wasn’t much for entertainment on the campus, so after their evening meal, students often congregated around the one pool table in the basement.

“We played pool until sometimes three o’clock in the morning,” King’s late close friend, Walter McCall, once recalled of his time with King at Crozer in an interview after his assassination.

In his 2018 biography of King, “The Seminarian: Martin Luther King Jr. Comes of Age,” author Patrick Parr described how King, who earned a bachelor of divinity degree from Crozer in 1951 at the age of 22, became proficient at eight ball despite an initial reluctance to partake in the game due in part to his strict upbringing.

Sometime in 1950, Parr reported, King’s father and uncle, Joel King, visited the campus and King took them to the basement to show off his pool skills. His uncle was stunned when King lit up a cigarette and got to playing.

“Daddy King had never had any patience for smoking, drinking, cursing, or even pool,” Parr wrote. “But as they watched King knock in a few pool balls, puffing away like a natural, Daddy King did nothing.

“Later, Uncle Joel asked his brother why he didn’t try to discipline King there in the basement. Daddy King remained silent,” he wrote. “‘Never got an answer,’ said Joel King. Martin Sr. must have realized that his son had outgrown such heavy-handed parenting.”
James Beshai, 94, who studied with King at Crozer and figures prominently in Parr’s book, was one of several people who authenticated the table for White. The table has diamond ivory inlays on the rails and decorative brass caps dot the sides.

“Because I spent so much time in the basement of Old Main playing pool and talking, I could never forget that table,” Beshai wrote in an affidavit confirming the table’s provenance.

Beshai, a retired psychology professor, recalled in a phone interview from his home in Lebanon, Pennsylvania, how King taught him to play eight ball on the table and how they whiled away the hours around the table philosophizing, parsing international affairs, and discussing their favorite authors, particularly the work of American theologian Reinhold Niebuhr.

“Although he studied philosophy and religion, he was able to communicate to the average person using the pool table as a medium to explain things to them,” Beshai said.

That King used the game of pool to connect with people and advance the struggle for civil rights is well documented.

In 1962, amid a desegregation campaign in Albany, Georgia, that turned violent, King pledged on television to “go to the pool rooms” to urge people to remain peaceful. The cameras followed him to Dick’s Cue Room, where he preached his message. 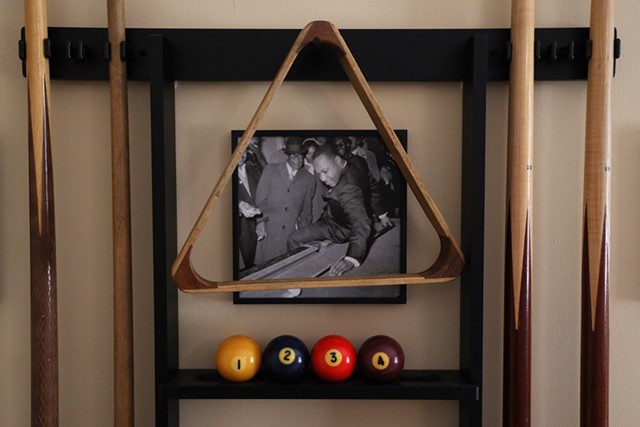 Perhaps the best known image of King playing pool was taken in 1966 during a stop in Chicago for an “anti-slum” campaign, when he was photographed sitting on the rail of a table about to execute a behind-the-back shot.

A few years later, in 1970, the table on which King mastered the clean break and his knack for talking to everyday people at their level was up for grabs.

Smith was a seasoned applied Christianity professor at Crozer who began teaching there shortly after graduating from the school in 1948. He was so young at the time that he chose to live in Old Main with the seminarians and resided just a few doors down from King.

He would eventually become an early mentor to King and, like everyone else who was close to King in his seminary days, he spent time with him around the pool table, according to Parr’s biography and Smith’s daughter, Meredith Ann Nichols. 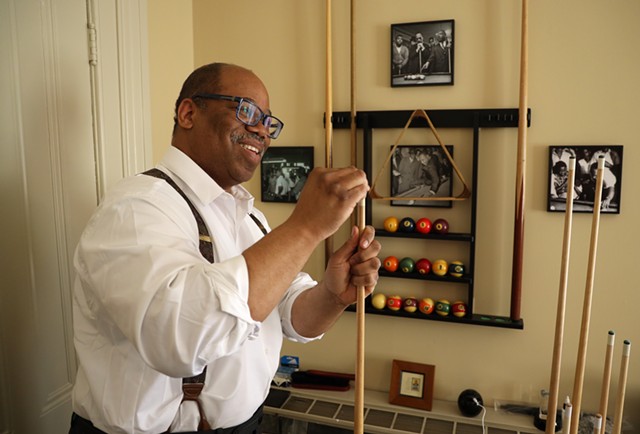 “At the time (of the merger), professors were asked if they would like the pool table,” Nichols wrote in an affidavit verifying the provenance of the table. “One of the professors, the Reverend Theodore J. Weeden, took possession of the pool table and brought it with him to Rochester.”

Weeden and Smith and their families settled near each other in Brighton, and for the next 20 or more years, the pool table, which Weeden had refurbished, would occupy a prominent place in the basement of Weeden’s home on Glenhill Drive.

“It was a known thing as a little kid that this was King’s table,” said Weeden’s son, Brian Weeden. “That’s what it was. Any time we had friends over . . . that’s what I would tell people, like it was normal. ‘This is grandma’s tea kettle and this is King’s table.’ It was very inspiring.”

One of those childhood friends was White, who recalled being touched by King as a boy but acknowledged not grasping the significance of the table on which he and his friend “Weeds” would play pool.

“Mr. Weeden would tell us the table came from Crozer and Martin Luther King played on it and it was, like, ‘Oh, that’s cool,’” White, 59, said. “But you know, you’re thinking about other things, playing football, or whatever kids do in high school . . . we really didn’t appreciate as I do now as an adult.”

The elder Weeden understood the significance of the table and when he later sold his home on Glenhill, and anywhere he relocated thereafter, the only condition of his new residence was that it be big enough to house the pool table, his son said.
“My father was very proud of it,” Weeden said.

When his father could no longer take the table with him, he gifted it to White and his Center for the Study of Civil and Human Rights Law.

White took possession of the table about 18 months ago and, from there, set about refurbishing it, authenticating its provenance, and giving it a proper home. 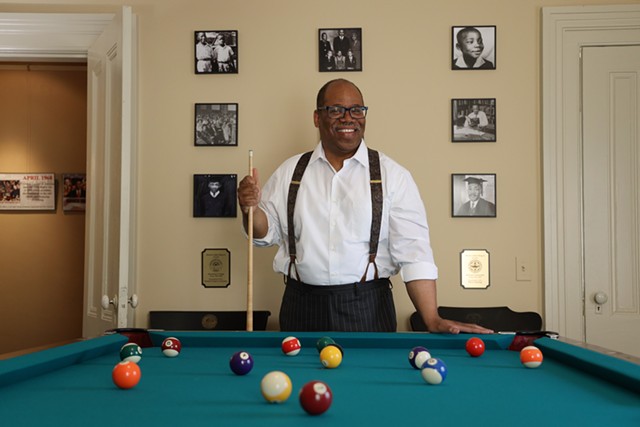 The room in which it sits today is an homage to King and his work. The walls are bedecked with portraits of King and paraphernalia of the March on Washington, which White’s father attended. A King James Bible sits atop a pulpit. A short film about King’s passion for pool, titled “Pool Shark for the People,” plays on a television in the corner.

White hosts tours of his collection for schoolchildren with some regularity and intends to add the King room to the circuit.

“You hear about the ‘I Have a Dream’ speech and ‘I’ve Been to the Mountaintop,’ but rarely do you hear of the hustle that he engaged in to get people involved in the movement when he wasn’t sitting in a church,” White said. “This allows people to understand how he made a connection with people through the use of a very common game.”