How the humble frame went from sidekick to the spotlight

PHOTO BY MAX SCHULTE Nancy Norwood is the curator of European art at the Memorial Art Gallery. She playfully calls frames that interfere with the art "cringe frames."
The permanent collection at the University of Rochester’s Memorial Art Gallery holds important paintings by greats like Monet, Cézanne, Matisse, Homer, and Cassatt.

So a recent tweet from the museum that saluted what is perhaps the art world’s most overlooked supporting actor — the humble picture frame — might have seemed out of character to the museum’s Twitter followers.


“Sure, paintings are cool, but have you ever noticed the frames?” read the tweet, accompanied by a photo of the corner of a gilt frame elaborately festooned with an ersatz Arabic theme.

That frame lines Jean-Léon Gérôme’s “Interior of a Mosque” and was hand-carved by Eli Wilner & Co., a leading framing restoration expert in New York City, at a cost of $20,000. Half of the price tag was paid by a grant, and half by Wilner, according to the museum.

In recent years, frames have shed their sidekick status and stepped into the spotlight at museums and galleries, earning newfound attention from curators and collectors as works of art in their own right.

“The painting is the work of art, but frames are also a work of art and they work together for a whole,” said Nancy Norwood, the Memorial Art Gallery’s curator of European art. “The frame really can bring the work of art to life. But the frame can also kill a work of art.”

Frames are fundamentally utilitarian objects. They exist to protect the painting and provide a boundary for the viewer’s wandering eye. Until fairly recently, many museums and collectors saw frames as interchangeable and expendable.

That began to change around the turn of the millennia, when museums around the country, armed with new scholarship about how artworks were originally framed, began reconsidering how their showpiece works were presented and became fussier about authenticity.

They embarked on costly reframing projects and set about convincing their donors that the right frame, which can cost tens of thousands of dollars, was more than window dressing.

“The scholarly study of art history focused on paintings for about 150 years and other media was often overlooked,” said Joseph Godla, chief conservator at The Frick Collection in New York City. “Now research is branching out and frames and decorative arts are receiving more attention.”

In the fall of 1999 the MAG installed “The Frame In America: 1860-1960,” an exhibit of mostly just frames. Dubbed “the show without the art,” the exhibit asked viewers to reconsider the role of the frame as an intermediary between painting and wall, and as a complement to the art it holds.

Two years later, the museum held a fundraiser specifically for frames. Much of the proceeds went toward reframing Claude Monet’s “The Rocks at Pourville, Low Tide,” a work from 1882, with a hand-carved, beaded and gilded frame that cost $20,000.

“The frame on this was completely inappropriate,” Norwood said of the work. “It was actually pink and it was a killer for this painting. People who would come in, the general public but even scholars of Monet, and say, ‘Oh my God you have to reframe that painting!’”

Norwood said the museum routinely uses local framers, but relies on hand-carving specialists for restorations of its major works, of which there have been a handful in her 22 years at the museum.

There are a couple of reasons why a Monet might end up in a gaudy pink frame, according to scholars.

Nineteenth-century art dealers frequently used their showiest frames to convince buyers that Impressionist and post-Impressionist works were consequential. But also, frames were more often chosen to enhance the owner’s décor rather than the paintings they held.

The latter was why “View of Mt. Marseilleveyre and the Isle of Maire,” a landscape by Paul Cézanne painted around 1882 and a significant work in the MAG collection, was encased in an ornate 18th-century Revival style frame. 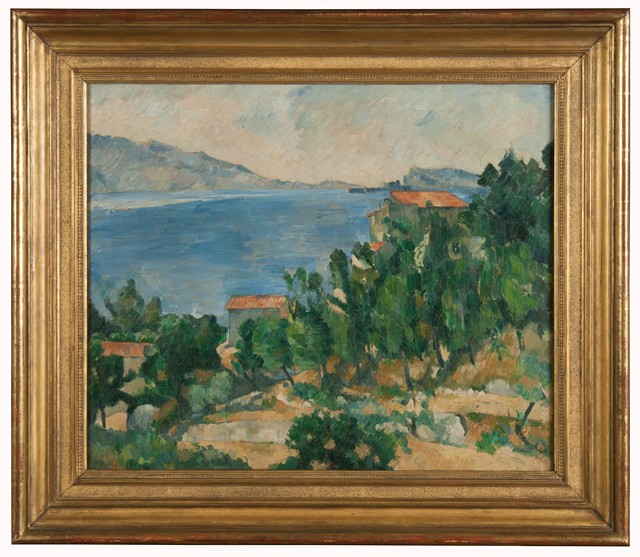 George Keyes, the chief curator emeritus at the Detroit Institute of Arts, disliked the frame so much during a visit to the museum four years ago that he offered to pay for the work to be reframed.

“I’ve decided your Cézanne desperately needs a new frame,” Norwood recalled Keyes telling her. “It’s one of the most important pictures in your collection, and it’s horribly underserved as it is.”

Museum officials settled on a replica of a relatively plain late 19th-century Louis XV gilded Revival handcrafted by one of the foremost framers in the world, Paul Mitchell, of London. The cost was £4,000, or roughly $7,500.

Keyes is currently financing another reframing by Mitchell, this one of a work by 17th-century Dutch painter Jan van de Cappelle titled “View off the Dutch Coast.”
Finding frames authentic to the time period of a painting is not the only goal, however. How the frame works with a piece and honors the artist’s intentions are also considerations.

For example, one of the Memorial Art Gallery’s most important American paintings, “Summer Street Scene in Harlem, 1948,” by Jacob Lawrence, was reframed a few years ago in black with heavy molding and a subtle gold liner reminiscent of a 17th-century Dutch frame.

“But it really emphasizes and enhances the figures in the work,” Norwood said.
Some painters cared so much about what surrounded their art that they designed their own frames.

That was the case with a work by American artist Harold Weston at the museum. His “Three Trees, Winter, 1922” is behind a simple gilt frame that Weston envisioned, making the frame an extension of his painting.

In a way, the frame is about guiding the experience of the artwork almost imperceptibly.

“It can help tell your story, it can be very allegorical, if you want it to be,” said Rheytchul Kimmel, master framer and owner of Lumiere Photo. “It completes part of the messaging.”

Norwood jokingly calls frames that contrast or interfere with the work they surround “cringe frames.” She said the museum still has a few of them, but that they are slowly being weeded out thanks to the generosity of donors and other benefactors.

Among Norwood’s “cringe frames” at the Memorial Art Gallery is one that she adores — a highly-decorative gilded frame with elaborate swirls in the corners that holds a pastoral landscape by 19th-century French painter Charles François Daubigny titled “Near Andrésy.”

“The frame is fantastic, it’s absolutely gorgeous, and it has nothing to do with the painting,” Norwood said.

When the museum had Mitchell do a mockup of what was planned for the van de Cappelle, it requested a mockup for Daubigny’s work to put on its wish list. Norwood called the demonstration frame “transformative.” Its price tag: $11,000.

“I love this frame, it’s a beautiful work of art,” she said of the “cringe frame” currently on the piece. “But when you think of a frame and a painting as a sort of marriage, you want it to be complementary.”